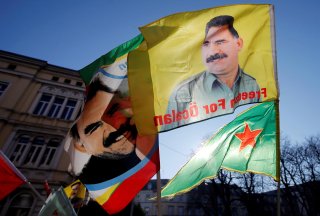 The Iraqi government in Baghdad and the Kurdistan Regional Government in Erbil signed a joint security agreement on Oct. 9, 2020, “to restore stability and normalize the situation in Sinjar,” the disputed mountainous district in northwestern Iraq largely populated by Iraq’s minority Yezidi population. The urgency of the deal—and the reason why the State Department and the United Nations both supported the talks—had less to do with Sinjar’s status as disputed territory between the governments in Baghdad and Erbil and more to do with a desire to shut-out the Kurdistan Workers Party (PKK).

The PKK emerged more than forty years ago against the backdrop both of Turkey’s political and ethnic polarization and the Cold War. In 2007, Aliza Marcus, a former foreign correspondent, wrote what remains the go-to history of the group and its imprisoned leader, Abdullah Öcalan. Suffice to say, Turkey considers the PKK a terrorist group and increasingly seeks to de-legitimize a growing network of Kurdish politicians and political organizations for supposed ties. For a quarter-century now, the United States has played along. In 1997, against the backdrop of U.S. efforts to support an arms sale to Turkey, the Clinton administration designated the PKK a foreign terrorist organization. While Belgium among other states has since re-examined and reconsidered evidence linking the PKK to terrorism, policy inertia and hostility from State Department’s deep-rooted Turkey lobby continues to block any U.S. reconsideration, despite the U.S. partnership with a PKK intellectual offshoot in northeastern Syria.

Neither the Iraqi deal over Sinjar nor the State Department’s efforts to delegitimize the PKK will work, however, for a simple reason: Punishing the PKK does not imbue its competitors with legitimacy. Consider Sinjar: The PKK took root in the region because most Yezidis believed Masoud Barzani’s Kurdistan Democratic Party betrayed the region’s Yezidis to the Islamic State.

The issue is not just Sinjar. Erbil may be the capital of Iraqi Kurdistan, home of a U.S. consulate, and a city dominated by the Barzani family, but the façade of stability is increasingly shaky. Locals—even nominal members of the Kurdistan Democratic Party—increasingly curse Prime Minister Masrour Barzani for his incompetence, repression, and corruption. Tensions between Masrour and his cousin Nechirvan Barzani, the regional president, are now out in the open. In recent days, the ruling family’s reputation took an additional hit when “Rebaz,” whom the Kurdish media describes as a retired intelligence service member, took to the airwaves to discuss various crimes and behaviors that the intelligence service had covered up, including allegations of rape against Nihad Barzani, brother of party leader Masoud and uncle of Masrour. In effect, local Kurds increasingly view the lawlessness of the Barzani family in much the same way that Iraqis once did Saddam Hussein and his sons Uday and Qusay. The American consul-general may sit in his compound and, from time-to-time, visit Kurdish officials in their offices, but the reality is that the Kurdistan Democratic Party is losing its legitimacy even in its traditional strongholds. Because most of the abuses and corruption are family-based, the PKK is able to juxtapose itself and maintain a clean image since its leadership is neither family-based nor involved in business dealings. Indeed, as the Kurdistan Democratic Party continues to hemorrhage popular legitimacy. Absent any other viable opposition parties not beset by the same family dynamics, it is not beyond the realm of possibility that the PKK could eventually take over Erbil.

The same dynamic is at play in northeastern Syria. The State Department has for years sought to promote Kurdistan Democratic Party proxies at the expense of those parties that evolved philosophically out of the PKK, but has consistently failed for a simple reason: corruption delegitimizes any party dominated by a single family. Nor do locals see appeasing Ankara any more realistic a solution than appeasing Beijing as a just solution for Uighur-populated areas in China.

Turkey and the State Department may be frustrated that the PKK continues to grow in both strength and popularity in Syria, Iraq and, for that matter, Iran and Turkey itself. Turkish leaders and American diplomats should understand why: Turkey may indoctrinate its population to believe the PKK are terrorists, but for most Kurds, the group is the only viable alternative to a political order permeated with corruption. This does not mean that PKK affiliates do not have their own democratic deficits nor that abuses of power have not occurred. Nor does it mean that the United States must endorse the PKK’s past or embraces its narratives about itself. Instead, a more deft and realistic Washington policy would be to engage with Kurdish groups that have foresworn political violence in order to improve their capacity and respective for democracy. American diplomats can continue meeting with Barzani office-holders, but should also meet with their PKK opposition. In short, it should treat the PKK an equal party.  For the United States to suggest, however, Yezidis should just get over Masrour’s betrayal, that Kurdish civil society should put up with repression and corruption, or that Kurds should ignore allegations that Barzani family members have not engaged in the worst crimes girls in a conservative society can endure are all losing arguments. Simply put, it is time that the United States stop designing its Kurdish policies through the lens of Turkey or a ruling family increasingly illegitimate in the eyes of its constituents, and instead work with those movements that have established real grassroots legitimacy. Excluding and designating the PKK simply will never work.