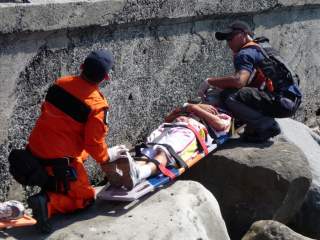 At 0440 Philippine time on November 8, 2013, Typhoon Haiyan—known locally as Yolanda—made landfall in the Philippines. It was one of the strongest typhoons on record to make landfall. It struck the central Visayas region and continued on to Leyte, Cebu, and Panay, hitting a total of six provinces and affecting over eleven million people. About four million people were displaced, over six thousand were initially reported as killed, and nearly six million required emergency food aid.

The Philippine government and local governments in the affected areas were unable to respond. Transportation and communication infrastructure was destroyed in the storm. Without immediate aid, the death toll rose to catastrophic levels.

Japan and the United States: Answering the Call

Japan and the United States were the earliest responders in the most critical early hours after the storm passed. The expertise of aid-giving agencies and nongovernmental organizations is helpful, but the unique capabilities of the Self-Defense Force and the U.S. forces stationed in Japan brought the needed organizational capabilities, including communications, logistics, airfield- and port-opening capabilities, reconnaissance means to find distressed areas and people, vertical-landing aircraft to deliver aid where the infrastructure was destroyed, and embedded medical care. U.S. and Japanese ships played a very valuable role. They allowed both nations to keep their operating base at sea and avoid the congested land areas where other organizations and agencies were exploiting the available dry land for their operations. U.S. amphibious ships even carried infant diapers. Diapers were a small but critical item that provided comfort for the young mothers caught in the disaster.

Perhaps most critical was the attitude displayed in Tokyo and Washington. We did not wait to clarify the situation before acting. We had a bias toward forward movement and response, relying on the early arrivals to assess the most critical needs and to act immediately.

The response provided a valuable example to the greater region. Japan and the United States quickly responded with a major military movement in the absence of complete information, coordinating activities as we moved to the objective area. Our ability to operate together seamlessly was on display. More importantly, those members of the force that were ashore and in direct contact displayed the high virtues of well-trained forces, tirelessly caring for the homeless, the sick, and the helpless, protecting the innocent from the ravages of nature and from the predation of those who would take callow advantage of the distressed for their own gain.

A short while after, the Philippine ambassador to Japan had occasion to present a speech in Tokyo to a gathering sponsored by an aid agency, Peace Winds America. In that speech to American and Japanese officials and donors present, the ambassador specifically and intentionally called Japan an ally—a powerful operation indeed.

The Asia-Pacific: A Tortured Land

As is well known, Asia is the reluctant host to more than the region’s fair share of earthquakes, tsunamis, floods, typhoons, pandemic diseases, and volcanoes. The region’s nations who are willing to cooperate and come to the aid of neighbors in need provide a major stabilizing influence and contribute to the expansion of stability and prosperity.

As with any operation, government, military, medical, and nongovernmental agency, professionals will examine the details of the Typhoon Haiyan response and make corrections in many areas in anticipation of future events. But the major lesson is clear: Our ability and willingness to come to the aid of a neighbor trying to recover from a disaster (especially in the very early stages) is a necessary and effective way to enhance our capability to be a productive member of the Asian community of nations. Trust and habits of cooperation develop under pressure in these disaster-response operations that prove vital in other affairs of state.

There is another set of requirements that should be part of the regional activities of the U.S.-Japan alliance in cooperation with Vietnam—the building of resilience in the face of likely threats. The physical threats of earthquake, flood, tsunami, and others can be better managed through construction of barriers and such. The threats to health will require much more work in the areas of both prevention and response.

This threat of disease introduces a new level of complexity, that of a fast-spreading infectious illness that threatens national and even regional stability. The danger of contagion complicates all the usual functions of a disaster-response effort.

Asia is home to many diseases with pandemic potential, and the recent West African Ebola outbreak showed just how damaging such an event can be. Building resilience to these pandemic threats is far more about building habits of cooperation and education.

Within the Asian region, we see countries where economic and political difficulties challenge the established order internally and in the region; where domestic crises threaten the region’s progress toward stable political cooperation; where historical mistrust and territorial disputes remain unresolved; where unrestrained population flows, displaced persons, crime, and corruption inhibit regional confidence, undermine democratic values, and lessen common security. A disease outbreak in these conditions can quickly destroy stability.

Responding to the Infectious Disease Challenge

To meet this threat, our forces and national institutions must do more than simply wait for something to happen. A broader, more constructive role is needed. An active and productive presence in this theater devoted to health security will not only help prevent such an outbreak, it will also help promote security, dampen sources of instability, deter conflict, give substance to security commitments, and ensure continued access to the region. Through active presence, we can help decrease the disease threat and help shape the regional geopolitical climate.

Within this broad, active presence, no activity is more profound than “Medical Diplomacy” work. An International Health Engagement effort, especially if it is built upon the U.S.-Japan alliance, with Vietnam as the ASEAN lead, builds capacity with our allies, friends, and international organizations. It improves health and resilience across the region and establishes cooperative surveillance networks to enable early warning.

At present, this includes (among other things) the U.S. Pacific Fleet’s “Pacific Partnership” and Pacific Air Force’s “Pacific Angel.” Additionally, the medical, dental, and veterinary work that accompanies every deployment for exercise in another country should be exploited. This should continue to be expanded to include allies and partners. Integral to this are education and training efforts with our friends to build relationships and develop capability. Through this, we hope to speed up recovery time and create more resilience to threats.

Battling a Common Foe: How a Joint Approach Could Help

Opportunity for regional expansion and integration in the face of a common threat beckons. Vietnam’s formal and informal leadership role within ASEAN provides a great advantage. U.S. and Japanese cooperation within Pacific Partnership can and should be expanded with participation from willing ASEAN nations, beginning with Vietnam. Once this precedent is established, Vietnam can then lead an expansion of this effort into the rest of ASEAN, South Asia, and greater Oceania.

This expanded participation can greatly increase the mission’s degree of coverage and help bridge cultural, linguistic, and national challenges. It will accelerate the professional advancement of participating individual members through collaborative practice of their specialties and embedded education and training efforts.

A U.S. Hospital Ship is the centerpiece of Pacific Partnership. With an increase in participation, additional sea-based platforms from the United States and other nations can be made available by adding other vessels and connecting them within a communications and logistics network, including embedded and attached aviation elements. For one example, Taiwan’s newest navy vessel brings a full surgical suite and offers a number of well-equipped hospital beds in a series of modern wards, including isolation and quarantine capability. Finally, through the creation of more partners, more continuous surveillance capability can be established across the region to enable more accurate and prompt notification of infectious-disease emergence. With this enhanced and timely warning, collaborative and cooperative action across the region, based on the operating patterns developed within the expanded Pacific Partnership, has a much better chance of arresting the spread of disease before it reaches pandemic proportions.

Diplomacy in the international arena often deals in soothing abstractions. Positive-sounding messages are thought to help lower tensions and lubricate political gears in favor of more meetings and discussions. In contrast, the extensive cooperative medical, dental, and veterinary effort recommended here offers many substantive advantages. The assistance provided comes with the faces of many nations and many native language skills. It shows a real ability to cooperate in support of perhaps the most profound of all efforts, preventing disease, saving lives, and increasing quality of life. It brings together many disparate and often conflicting national interests in a safe space, allowing habits of cooperation and building the irreplaceable personal connections so necessary to resolution of difficult economic and geopolitical issues. Cooperative and productive human interaction across political, cultural, and geographic boundaries builds a foundation for enhanced cooperation on all issues.

Wallace C. Gregson is Senior Director, China and the Pacific at the Center for the National Interest. He retired from the Marine Corps in 2005 with the rank of Lieutenant General. He last served as the Commander, U.S. Marine Corps Forces Pacific; Commanding General, Fleet Marine Force, Pacific; and Commander, U.S. Marine Corps Bases, Pacific, headquartered at Camp H. M. Smith, Hawaii. Gregson also served as U.S. Assistant Secretary of Defense for Asian and Pacific Security Affairs from 2009-2011.