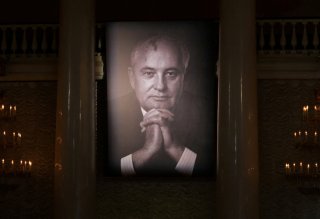 MIKHAIL GORBACHEV’S death has prompted a torrent of commentary confirming the old adage that “the history we write tells more about the present than the past.” Some pay fitting tribute to the former Soviet leader’s remarkable accomplishments in overcoming decades of Cold War confrontation and overseeing a peaceful retreat from empire, in humanizing and democratizing a ruthless command system that ultimately could not be reformed. But others denigrate or ignore his achievements in distorted, ahistorical, churlish accounts that cherry-pick their facts or simply get them wrong. Characterizations of Gorbachev as a “quintessential apparatchik” or a blood-stained “totalitarian” who hadn’t sought “to end tyranny” and couldn’t imagine Russia as anything but “an empire” are truly bizarre—and tell us more about the present biases of their authors than they do about the past dramas of perestroika and the Cold War’s end. Those biases go so far as to compare Gorbachev with Vladimir Putin or even blame him for Putin’s war on Ukraine. It will be unfortunate indeed—bad history of the past, and even worse lessons for the future—if such cynicism comes to predominate and turns audacious, principled, globally-minded leadership from an object of admiration into one of ridicule. Russia is not the only country that could use another Gorbachev right about now.

COMMON TO much misremembering is a condescending dismissal of Gorbachev’s leadership under perestroika, of his efforts to reform and liberalize the sprawling, stagnant Soviet system. Is Gorbachev to blame for failing to revive the economy because he was “bewildered,” because he “never understood” the system’s problems and had no plan for “orderly economic reform” as Anne Applebaum claimed in The Atlantic?  Several things should be noted in reply, the first being to recall the colossal magnitude of the task—and the vast, entrenched, antiquated bureaucratic monster that was the Soviet economy in 1985. Of course, perestroika proceeded by trial and error, and of course, Gorbachev lacked a detailed plan for something that could not have been “orderly” even in the best circumstances, let alone those he inherited: a weary society and stagnant economy slammed by the one-two punch of plunging oil prices and a raging arms race. Nobody had such a plan, because nothing of such enormity had ever been tried before. Compared to the ossified Soviet economy under state control since 1917, reform of Poland (which had retained private farming and much entrepreneurship, since communism was only imposed after 1945) or the Baltic states (small, agile, with key cultural and financial ties to the West) were child’s play. Crucially, Polish and Baltic reformers also benefited from a lack of concerted resistance since their transitions began after Gorbachev’s push for democratization and his acquiescence in the collapse of Communist Party rule. Nobody cleared the way for Gorbachev, whose initial economic reforms stumbled as he simultaneously struggled to liberalize the Soviet political system—first via glasnost, and then through competitive elections, from city councils and regional legislatures all the way up to a new national parliament.

A common cliché of Gorbachev’s detractors in the Soviet intelligentsia was that “Perestroika is like a plane that took off without knowing where it would land.” Well, look to China if you seek “orderly economic reform” in a vast, centralized, single-party system (and China’s agricultural economy was still easier to liberalize than the USSR’s complex industrial behemoth). In fact, even Deng Xiaoping did not quite know where China’s reforms would land, and to the extent that they were more or less steered to a desired destination, it was with much political violence and zero political liberalization. This deserves emphasis: Gorbachev’s reforms not only faced opposition from senior Central Committee officials and some Politburo members, but even when initiatives were agreed and laws passed they languished due to bureaucratic resistance and outright sabotage by local officials. In a ruling party where power had devolved and corruption metastasized, Gorbachev lacked the levers for implementation and enforcement available to his Chinese counterparts. Thus, another contradiction of Gorbachev’s critics is that they fault him for not exercising enough control over economic reforms while retaining too much control over political reforms. How do they imagine that more rapid democratization, with the paralyzing polarization and national separatism that it engendered, would have facilitated more “orderly” market reforms? This highlights yet another intelligentsia platitude of the 1990s that Gorbachev’s critics have resurrected upon his death, namely that he wrecked the old system but “put nothing in its place.” How do they explain this failure? According to Applebaum, “he knew that Soviet society was stagnant and Soviet workers were unproductive [but] he had no idea why.”

Anders Åslund, one of the West’s leading experts on transition economics who analyzed Gorbachev’s reforms firsthand from Moscow, disagrees. Midway through perestroika, he judged Gorbachev a “radical reformer” struggling against “top-level political resistance” to introduce key market mechanisms into the Soviet economy. Moreover, he emphasized that Gorbachev had led a no-holds-barred review of the country’s socio-economic problems in 1983, two years before taking power, and outlined a market-oriented reform agenda shortly thereafter, leaving no doubt that “Gorbachev had perceived the depth of the problems Soviet society was facing.” A large body of research since has amply confirmed Åslund’s early assessment. It details—in many articles, books, interviews, and documentaries—how even as Gorbachev rose through the Soviet system as an outwardly conventional member of the nomenklatura, he consistently supported reformist innovations and grew increasingly frustrated with the cruelty of that same system—from the oppressive conditions on collective farms, to the arrogance and corruption of party officials. Particularly notable was the breadth of Gorbachev’s (and his wife Raisa’s) early-1980s outreach to critical experts and liberal intellectuals in all aspects of politics—including reformist sociologists and economists. No doubt he was still more socialist than social-democrat, far from the radical reformer he would become in just a few years. But the open-minded and innovative Gorbachev was intensely studying a wide range of problems and attendant proposals for reform, belying the caricature that he was “bewildered” and “had no idea” what was wrong with Soviet society.

BUT WHATEVER his intentions, is it still true that Gorbachev undermined the old system yet “put nothing in its place?” In fact, over a few years, Gorbachev legalized private enterprise; he gave state enterprises broad autonomy from suffocating central planning; he opened the doors to foreign investment and even majority foreign ownership of joint ventures; he ended the state monopoly on foreign trade; he permitted long-term private leasing of state farmland; he even legalized the creation of private commercial banks. As someone who worked for a new private enterprise (a news agency, in 1989) and then in a U.S.-Soviet joint venture (consulting on foreign investment in manufacturing, over 1990–1991) I observed at close range both the sweeping nature of these reforms and the tremendous difficulty—chiefly, bureaucratic resistance and bribe-seeking officials—that they faced in implementation. No wonder conservatives opposed them; these were astonishing steps that had seemed inconceivable right up until the moment they were announced.

Yes, Gorbachev was slow to accept the need for broad marketization of the Soviet economy and some of his partial market steps backfired badly in a system that retained much central planning and state ownership. He shied away from large-scale privatization during his time in office, hence his vacillation over the 500 Days program devised by a team of economic reformers in 1990. Because it was ultimately shelved, 500 Days has acquired mythical status in hindsight for many Gorbachev critics. Yet insofar as it aimed to do in under two years what went so terribly wrong under his successor Boris Yeltsin in five—and would have attempted this not only in Russia but across the entire USSR, where it would have unleashed cutthroat property battles among the Soviet republics—500 Days would most assuredly have failed.  While a “valiant effort” at rapid marketization, it was also “ill-defined,” “unworkable” and “riddled with inconsistencies.”  Had Gorbachev tried it, he likely would have faced a hardline coup in 1990 instead of the one he did face in 1991. (Indeed, an “administrative coup” seeking to transfer his presidential powers to a conservative prime minister was also tried in 1990.) As his former advisers remind us, Gorbachev was never free of the threat of sudden ouster by hardliners in the senior leadership.

Still, Gorbachev did lay a foundation for market reforms. Instead of claiming that he didn’t, wouldn’t it be better to ask why his successor Yeltsin failed to build on it in an “orderly” way? While Gorbachev’s final year saw deep popular disillusion and crippling polarization of the ruling elite, Yeltsin became the unchallenged leader of Russia in 1992 with a broad popular mandate, special emergency powers, and the Communist Party banned. With those advantages—and tens of billions in Western aid that Gorbachev had been denied—why didn’t Yeltsin build on his predecessor’s steps to complete “orderly” market reforms? For example, why was regulation of a booming private banking sector earlier legalized by Gorbachev subsequently neglected until Russia’s disastrous financial collapse of 1998? Why did Yeltsin ignore the urgency of small-business loans and agricultural credits, instead allowing Russian banks to morph into the tools of oil oligarchs and money-laundering machines of organized crime? Why did he do the oligarchs’ bidding in excluding foreign competition from the financial sector, thereby abetting their parasitic practices? Why, over nearly a decade in power, did Yeltsin fail to legalize full private ownership of land? Yeltsin’s one major “market” reform was a process for privatization of state property that was so thoroughly corrupt, in a society so deeply impoverished, that it soured a generation of Russians on free-market capitalism. If anybody should be faulted for wrecking the old system and “putting nothing in its place”—except misplaced faith in the magic of the unfettered free market—it is Yeltsin.