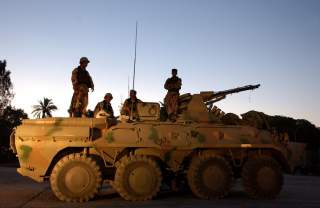 It wasn't long ago when the streets of Baghdad, an historical center of Arab history, culture and politics, were literally running red with blood. Back in 2006, when the war in Iraq was at its worst and dozens of American soldiers were dying every month, the residents of Baghdad were experiencing their most devastating period of violence since the eight-year Iran-Iraq war. Except, rather than two nations shooting at each other, the violence was Iraqi-on-Iraqi. Or, more accurately, Sunni-on-Shia and Shia-on-Sunni.

As Meghan O'Sullivan, the point-person for Iraq on George W. Bush's National Security Council, said years later in a PBS documentary about the war, Baghdad in 2006 was "hell." Dozens of young Sunni men were found on the side of the road, butchered to death with their skulls crushed, every day. Suicide bombings and car bombings from ISIL's parent organization, Al Qaeda in Iraq, would kill hundreds of people in Baghdad in virtually every corner of the city: restaurants, cafes, mosques, markets and traffic circles were all targeted. Shia neighborhoods in Baghdad, like Sadr City in the northeast and Shaab to the north, would be purposely targeted by Al Qaeda to inflict massive carnage on the Shia population. Shia militias, often with the blessing or acquiescence of the Iraqi army and national police, would retaliate by rounding up random Sunnis and executing them in the most brutal ways imaginable.

One would think that seven years later, all of that sectarian hatred and animosity would be either subsided to a significant degree or gone from the city entirely. Baghdad used to be a cosmopolitan city, after all—a microcosm of the many sectarian and ethnic communities that make up Iraq's population. The rise of the Islamic State, a minimum American presence, a callous central government and a hollowed out Iraqi army, however, have all combined to produce a nearly identical picture of what Iraq was like in 2006.

According to an investigation from Amnesty International, the kinds of violence that were once perpetrated by powerful and unaccountable Shia sectarian militias during the dark days of 2006 and 2007 are once again a fact of daily life in 2014. Young Sunni men are singled out for illegal detention, torture and execution by pro-government Shia militias on the mere suspicion that Iraqi Sunni communities are assisting or condoning the Islamic State's presence. Increasingly, young men are taken away from their homes in the middle of the night by masked militiamen without any explanation as to why they are being picked up. The lucky ones are freed after several hours or days of intense torture. Others are killed and dumped by the side of the road, only to be found by their family members in the morgue days or weeks later.

The killings themselves are random, but there is a kind of self-perpetuating cycle that exists. As Amnesty reports:

"Sunni men of fighting age who come from, go to or live near areas where there are IS groups tend to be considered by many militias to be terrorists or terrorist supporters and that is why they often get killed, whereas some militiamen target Sunnis in blind revenge for the crimes committed by Sunni terrorist groups."

If the cycle sounds familiar, it should—it’s precisely what happened in 2006 and 2007, when Sunnis were preyed upon by Shia death squads roaming the streets and Shia were blown to pieces by a radical Sunni terrorist organization.

What is equally disturbing as the type of violence that the Shia militias are levying is the power and leverage that they hold over the Iraqi Government. The Iraqi army is so disheveled and has been humiliated by the Islamic State for so long that Iraq's last government under Prime Minister Nouri al-Maliki panicked and called on all able-bodied Iraqi men to enlist in the ranks of pro-government forces. Tens of thousands of Shia have volunteered to fight for the government against what many view as a takfiri revolution that aims to reclaim political power for a once-dominant Sunni minority, all the while pushing Iraq's Shia population back to second-tier status. The relationship between the Iraqi army and the informal militias has gotten so entwined that it's often hard for those arrested to determine who in fact is arresting them: Iraqi soldiers, Iraqi police officers or one of the powerful and unaccountable Shia militias that can do virtually whatever they want. After the collapse of several Iraqi divisions last June, Prime Minister Maliki needed all the men he could get to fill in for the desertions and casualties that the regular army suffered throughout the year. Shia militias like Asa'ib Ahl al-Haq, the Badr Brigade, Jaish al-Mahdi (now renamed the "Peace Brigades") and Kata'ib Hezbollah were more than happy to meet the call.

Iraq's new prime minister, Haider al-Abadi, has since made several moves to clean up the mess that Maliki left behind. Abadi has demanded that all militias disband and come under the authority of the official security forces, and he has eliminated the office that Maliki established to work around the Defense Ministry and issue orders directly to field commanders. Both of these moves are no doubt positive steps, and there is evidence in public reporting that Sunnis who couldn't stand Maliki are willing to give Abadi a chance to prove himself.

But if there is anything that can be taken from Amnesty International's investigation, it's that Abadi's real challenge will be stemming the proliferation of the militias and ending their targeted violence towards Iraq's Sunni community. Those who are suspected of conducting these crimes at the very least need to be questioned by the Iraqi Interior Ministry, and where evidence exists, prosecuted by Iraq's less-than-stellar justice system. It's a big test that will have to be passed by an untested prime minister.