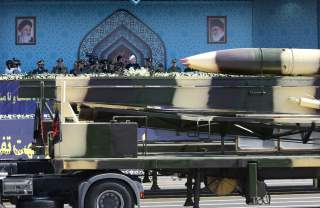 On Tuesday, at his speech to the UN general assembly, President Trump again implied bluntly that he would not stick to the nuclear deal between Iran and the world’s major powers, calling it “an embarrassment.”

The Trump administration has been long signaling its intentions regarding the nuclear agreement, known as the Joint Comprehensive Plan of Action (JCPOA). In July, President Trump reportedly asked his staff to find a way to get the United States out of the JCPOA. In September, U.S. envoy to the United Nations, Ambassador Nikki Haley, made the case for withdrawing from the nuclear agreement, claiming that Iran was in violation of the accord. Just this week, in an attempt to point the finger at the International Atomic Energy Agency, Trump said that the United States “will not accept a weakly enforced” deal.

As tensions grow between Iran and the United States, the administration faces a major deadline in mid-October to recertify Iran's compliance with the agreement. If it does not, Congress will have sixty days to reapply the sanctions that were lifted under the agreement. Although Iran has vowed not to be the first to break the accord, Tehran accused the United States earlier this year of breaching the agreement after Congress imposed new sanctions following a recent Iranian missile test.

The mutual antagonism, only two years into the decade-and-a-half-long agreement, is highly unstable. Already facing an acute crisis with North Korea, the Trump administration appears ready to open a second nuclear front, this time with Iran. Critics of the JCPOA suggest stronger constraints on Iran’s regional activities and missile development could be imposed after the deal collapses. But what would happen to Iran’s nuclear program in this scenario?

Pezhman Rahimian, deputy chief of the Atomic Energy Organization of Iran (AEOI) and a key figure on Iran’s negotiating team, can help answer that question. In August 2015, just after the nuclear deal was announced, Rahimian gave an interview to an Iranian newspaper (later translated by the British Broadcasting Corporation) in which he described Iran’s contingency plans for a collapse of the JCPOA. His remarks were unusually detailed and technically focused.

“We will not return to the condition before the agreement,” Rahimian said. “The world will be confronted with a new situation.”

Rahimian laid out three main principles for Iran’s post-JCPOA strategy. The first was reversibility. If the nuclear deal collapsed, he said, then Iran would restore its nuclear program to its pre-JCPOA capacity; in particular, it would resume uranium enrichment at both its Natanz and Fordow facilities. This, he emphasized, was highly prioritized in AEOI’s policy and activities.

The second principle was the expansion of Iran’s nuclear program. According to Rahimian, Iran would dispense with its existing and outdated IR-1 centrifuges. In their place, Iran would mass-produce, install and run more advanced centrifuges with four to five times the enrichment capacity.

Finally, he stressed there would be an acceleration of research and development toward creating the next generation of centrifuges, which are ten to twenty times more efficient than Iran’s existing centrifuges.

Rahimian acknowledged that implementing a post-JCPOA strategy would take time.

Iran’s president recently reiterated Iran’s determination, stating that the program could be restarted “in a matter of hours,” and that a reconstituted nuclear program would be “far more advanced.” Iran, Rouhani said, “has thought long and hard about” its reaction.

The Trump administration might believe that it has a wide range of creative options to prevent the restoration and growth of Iran’s nuclear program. In reality, the choices are likely to be painfully finite and familiar to those who have followed the problem: (1) the administration can attempt to forge a new diplomatic agreement; (2) it can organize international pressure with economic sanctions; or (3) it can sabotage Iran’s nuclear facilities or destroy them with a military strike.

A new round of diplomacy is far-fetched. If the JCPOA dissolves and Iran starts to expand its nuclear infrastructure, Iran would have no incentive to reengage at the negotiating table. Iran’s foreign minister Zarif tweeted last week that the deal “is not (re)negotiable,” calling a better deal “pure fantasy.” Opening new negotiations with a United States that had abandoned its past commitments would be political suicide for Iranian president Rouhani, who has been facing increasing domestic criticism over the JCPOA.

Restoring effective sanctions would take years at best. The International Atomic Energy Agency certified again last month that Iran is compliant with the deal and is meeting all its JCPOA obligations. If the other parties to the agreement conclude that the United States has unilaterally brought down the deal—after refusing to be bound by other popular international initiatives, like the Paris climate accord—President Trump would likely find that reuniting the international community against Iran is a difficult and lengthy process. Commenting on that possibility on Monday, the French foreign minister stated that even if Trump pulled away from the deal “other parties to the deal will carry on.”

The question of sabotaging or bombing Iranian nuclear facilities has always boiled down to how much time such measures can buy. When presidents Bush and Obama asked about the efficacy of military action, Secretary of Defense Gates estimated a two to three year delay before Iran would regain its nuclear capability—a limited benefit given the likely costs, which could include another war in the Middle East.

President Trump and members of Congress should pay attention to Rahimian. The nuclear deal does not limit Iran’s support of terrorism or its threatening missile program. That was not its intent. But without the JCPOA, or a clear alternative strategy, the next round of interactions over Iran’s nuclear program won’t yield a better deal for the United States.

Martin B. Malin is executive director of the Project on Managing the Atom at Harvard Kennedy School’s Belfer Center for Science and International Affairs.

Amit Grober is a research fellow with the Project on Managing the Atom.