Divide and Conquer: Richelieu's Playbook for the Middle East 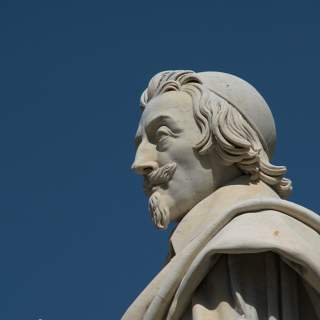 Have American foreign policy elites forgotten how to do strategy? This is no mere academic question; thousands of lives and long-term national interests are at stake. It is time for a wholesale recalibration of the “War on Terror.” Rather than rooting out terrorists ourselves, it is time to embrace the older wisdom of past strategists. It is time to divide and conquer. Few individuals represent a better, if unpleasant, illustration of this principle in action than the famed French Chief Minister Armand Jean du Plessis, the “Red Eminence,” also known as Cardinal Richelieu.

I have previously asserted that the Middle East is currently embroiled in what is very similar to the European Thirty Years' War of 1618-1648. In recent months, many illustrious analysts and practitioners of statecraft have openly made the same analogy, most notably Richard Haas, the President of the Council on Foreign Relations, and Henry Kissinger in his new magnum opus, World Order.

If we take this as a reasonable analogy, what potential lessons can we take from the Thirty Years' War and who might teach them? Could one learn from one of the heroes in Kissinger’s oeuvre, the “Red Eminence” himself, the initial architect of the modern international state system, Cardinal Richelieu?

Cardinal Richelieu might seem an odd choice from which to seek inspiration. This is especially the case for a nation, the United States, that historically perceives itself as more idealistic than other nations and was, in many ways, founded in direct opposition to the religious persecutions of a similar ilk to those seen on a daily basis in the Middle East. However, the Cardinal, perhaps as much as any practicing statesman, offers strategic lessons.

These lessons are of an admittedly darker sort than those with which American policymakers are typically comfortable. After all, Richelieu is almost as well known for being a villain in the works of Alexandre Dumas as he is as a statesman. However, in a new era where none of the typical theories of global power such as unipolarity, bipolarity, and unipolarity explain the current situation, the Cardinal’s lessons may well prove themselves far more useful than recent notions of riding into disparate cultures on a white horse and attempting to save those that do not want to be saved.

According to Kissinger in his book Diplomacy:

Richelieu thwarted the Habsburgs and the Holy Roman Empire was divided among more than 300 sovereigns, each free to conduct an independent foreign policy. Germany failed to become a nation-state; absorbed in petty dynastic quarrels, it turned inward.

The Machiavellian genius of Richelieu was in recognizing the challenge posed to a still emerging France by the surrounding Habsburgs lands, as well as the potentially devastating power of a united Germany, still latent, but eventually realized by Bismarck in 1871. Richelieu prevented France’s various threats from uniting by working and funding a wide array of parties, including the Protestant power of Sweden and its swashbuckling king, Gustavus Adolphus.

Richelieu encompassed in his own person the belief system of Machiavelli and Hobbes -- one stipulating that the state, France in this case, constituted its own principle and morality.

In Richelieu's lifetime the problem was the lack of an international system altogether and the need to create one, hopefully under France's ascendancy. And France as an institutional mechanism was, to a significant degree, Richelieu's creation. Richelieu might have had ice in his veins, but by uniting political power with the birth of modern capitalism he combined raison d'état with raison d'economie.

Today, the Middle East no longer has any order. It now passes for conventional wisdom that the post-World War I outline of the modern Middle East created out of the ashes of the Ottoman Empire is no more than an expression on the map. A new order must eventually develop in the region in order for the horrors that plague the nightly news to eventually be stopped. Yet as with the Thirty Years' War, it is unlikely that this eventual outcome can be achieved until the region endures its own long, hard slog through a civilizational, inter-communal, and geopolitical conflict. If the Europe we begin to recognize after 1648 could not have existed without the tragedy of the Thirty Years' War, why do so many think the Middle East can somehow avoid a similar trajectory on its path to modernity? Hope cannot substitute for strategy. If a situation is tragic, it is best to honestly acknowledge this and adapt appropriately.

If one adapts Richelieu’s methods to American policy in the modern Middle East, one can begin to see the outlines of a coherent strategy emerge if one were to substitute the Middle East for Germany in a Thirty Years' War-type narrative. Though this goes against the grain of conventional wisdom, a brief analysis of what passes for such wisdom raises significant doubts as to whether it is really “wisdom” rather than mere conventional thinking. Conventional wisdom usually holds that the United States must remain actively engaged in everything in the Middle East, from fighting the Islamic State to the Israeli-Palestinian Peace Process.

Richard Haas argues that the prevention of WMD proliferation, stable Middle Eastern oil flows, and, of course, counter-terrorism against the Islamic State are all critical American interests. While this makes some sense, even Haas admits that the Middle East is now likely a problem to be managed and not solved. Yet, this very conventional wisdom seems unable to take into cognisance the key triad of challenges threatening to finally undo Pax Americana: America’s domestic challenges, the rise of Great Power competition and the looming establishment of a Sino-Russian axis, and the general instability of the regional order in the greater Middle East, a region that Zbigniew Brzezinski has termed the “Global Balkans.”

The sine qua non of American geopolitical strategy since the end of the Second World War through 2003 was to embrace stability and order whether through the containment of its ideological opponent during the Cold War or through attempting to lock in existing gains. The decision to invade Iraq in 2003 by the Bush administration and topple the regime of Saddam Hussein upended that strategy. The effort to “end tyranny” in the world was a fundamentally destabilizing action. The irony is that America has been unable to stomach the consequences that flowed from that decision.

The naïve view that a functional and, at least semi-Western, democracy would take root in the heart of Mesopotamia was alluring to many (this author initially included). However, illusions turned into nightmares. Arab Springs turned into Thirty Years' Wars, chemical attacks, decapitations, and burning people alive in cages.

American policy is floundering as it attempts to chart a course through the Scylla and Charybdis of defeating Islamist universalism and the millennia old Sunni-Shia civil war. As of this writing, President Obama is attempting to do the bare minimum to knock back the Frankenstein-monster amalgamation of Islamist extremism and Caliphate nostalgia represented by the Islamic State. Besides his half-hearted efforts, he is being further thwarted by multiple regimes more interested in long-standing issues than directly confronting the Islamic State.

The central pillars of American Middle East policy since World War II was to keep the Soviet Union out and then to prevent the rise of a regional hegemon that would have the ability to unilaterally dictate the flow of oil out of the region. Ultimately, it all came down to oil and stable energy supplies.

Today, who is the great power that threatens to gain control of the region in the same way the Soviets once did? Russia? Probably not, though it can resume some level of influence lost in the wake of the 1973 Yom Kippur War and. China? Perhaps, more likely, though given its challenges in the South China Sea, this is still a remote possibility, at least in the near term.

Who will be the hegemon? It was once feared that it might be the Ayatollah Khomeini-inspired Islamic Republic of Iran. President Reagan balanced Iran by tilting to the Saddam Hussein-led Iraq. When Saddam overstepped his power by invading neighboring Kuwait, this led to the 1991 Gulf War and to the decade-long policy of “dual containment.” One might argue Iran represents, once more, the greatest threat especially to regional stability if it acquire nuclear weapons. Yet Iran is also busy propping up the Assad regime in Syria and the Shia-dominated government in Baghdad. It should be obvious there are no other real contenders. Saudi Arabia? Too busy countering Iran. Egypt? Too busy maintaining order in a country on the edge of famine. Turkey? Too busy dealing with what will likely be a renewed Kurdish problem. Obviously, Syria and Iraq will be lucky if they even retain their current borders. All the other states in the region are too small and too challenged in their own ways to make a serious bid for anything other than survival. There are no regional hegemonic threats on the near-term horizon.