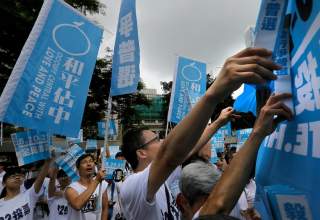 The convoluted struggle for more democratic elections in Hong Kong reached at least a temporary halt last week with neither a bang nor whimper, but as farce. With pro-government legislators attempting a disorganized walkout for unclear reasons, the remaining members of the territory’s Legislative Council (Legco) voted down an election law dictated from China by a 28-8 margin—even though an all-hands vote would have given the Beijing side a large, though not deciding, majority.

The outcome was highly embarrassing for the governments of Hong Kong and China, and for the mainland’s Communist Party. But it was no clear victory for pan-democratic forces in Hong Kong; Beijing has made clear there will be no compromise substitute for the rejected measure. Instead, an existing and unpopular electoral system will stay in place indefinitely, allowing a pliable election committee dominated by Beijing loyalists to choose whoever the mainland blesses as Hong Kong’s next government head. Democracy will have nothing to do with it, and the coming months seem certain to bring Hong Kong new political, social and economic troubles, some of which could come from the U.S. Congress.

At issue was a proposed universal-suffrage law that would have given Hong Kong’s five million voters the right—for the first time—to choose their own chief executive. But the electoral proposal had a major flaw: only two or three candidates with prior approval from Beijing could be on the ballot. Anyone Chinese authorities deemed “unpatriotic,” who did not “love Hong Kong” appropriately (that is, who might oppose or even seriously criticize Communist Party policies), would be banned. The territory’s pro-democrats called the system fake democracy and vowed to block it in the seventy-seat Legco, where it needed a two-thirds majority to pass. Many outsiders also found the system fraudulent; Larry Diamond of the Hoover Institution at Stanford University, an expert on elections who has paid special attention to Hong Kong, has called it “frankly an insult not only to democratic aspirations but to the intelligence of the Hong Kong public.”

The main questions now concern what comes next, and it’s difficult to foresee anything positive resulting from this showdown. For one thing, the territory’s democratic forces must decide how to continue their struggle for a more representative voting system.

When Beijing refused to open up the nominating process, they tried confrontation, but it got them nowhere. Their main effort was to seize the streets of Hong Kong’s main business district in a mass protest called Occupy Central, hoping it would pressure (or embarrass) Beijing into offering a political compromise. And the movement did bring forth unexpected thousands of ordinary citizens—especially enthusiastic young people who also had other grievances—and endured for seventy-nine days, far beyond early expectations. It earned worldwide sympathy for protesters symbolized by the yellow umbrellas they unfurled, angering both the Hong Kong and Beijing governments. In the end, however, establishment forces got the upper hand, and the crowds drifted away somewhat dispirited by their lack of tangible gain.

This has widened divisions within the pro-democratic camp, which was never a very cohesive group to begin with. Already, one leading democrat, Legco member Ronny Tong, who helped found the influential Civic Party, has quit both the legislature and his party in protest. He accuses his former colleagues of unwisely abandoning moderation—along with other pro-democratic groups—and becoming too confrontational. (He called Occupy Central a bad idea from the beginning.) Tong advocates a middle way, such as trying to revise membership of the crucial election committee to make it more representative of the general population and thus more likely to support a diverse list of candidates for the top office. Hong Kong’s best-known advocate for greater democracy—former number-two official Anson Chan—also favors more negotiation, though she thinks strikes or classroom boycotts might help the cause.

But others, buoyed by the fact that they nominally voted down the pro-Beijing plan rather than merely blocked it, favor a more aggressive stance. So far, however, they have no clear strategy and little leverage—beyond the fact that most Hong Kong citizens do want a more open voting system and don’t trust the Chinese Communist Party (which leaders of the main pro-Beijing party sometimes concede). Months of internal squabbling are likely, partly because most pro-democratic parties are small and dominated by middle-class professionals with few resources and limited reach into the general public, and they are sometimes divided by personal rivalries. By contrast, the better-organized main pro-Beijing party gets much mainland help (probably contrary to Hong Kong laws about party finances) and practices costly ward-heeling politics that its democratic rivals cannot match.

Yet the pro-establishment forces are also divided as they try to assess blame for the final voting fiasco. This even includes a public spat between brothers from one of Hong Kong’s wealthiest families about who should be held responsible. Yet those divisions won’t matter much; the current election system, which poses no risk to the pro-Beijing side, will stay in place at least through 2017 when the next chief executive is chosen—perhaps beyond. The current government leader, Leung Chun-ying, has said the door to further talks about the voting system is closed firmly for at least two years, and there are no promises about negotiations after that.

However, divisive politics will resurface soon. Later this year, there will be voting for seats on the eighteen district councils, neighborhood organizations that handle local issues and can build party loyalty. These also help select candidates and determine winners in certain Legislative Council contests. At present, most district councils are controlled by the main pro-Beijing party, known by its initials of DAB, but the pro-democrats have vowed to regain some lost seats. Beyond that, all seventy Legco seats come open next year. Half will be elected by interest groups that usually (but not always) choose government loyalists, but the other thirty-five will be by public ballot. The democrats’ first goal is to retain their blocking third; government supporters will try hard to prevent that and thus gain the Legco votes needed to revise laws and rules as they choose. The strident politicking will almost certainly include, as usual, Beijing propagandists accusing some pan-democrats of serving foreign powers—notably the United States and Britain—to undermine national unity.

Much depends upon attitudes within Hong Kong’s polarized society, which has one of the world’s sharpest income gaps. This convinces educated youth in particular that Hong Kong is dominated by big businesses, aided by a servile government, that bow to Beijing’s wishes to protect their own commercial interests on the mainland. In brief, they see communists and capitalists allied against local democracy and social policies they favor. Thus when local graduates find themselves inadequately trained for work in the modern trade and finance sectors, they blame the government and those who support it—especially if prime jobs then go to mainlanders with special connections. Four consecutive years of slow economic growth have fed this disenchantment.

That’s partly why most citizens now call themselves Hong Kongers first and Chinese second, an attitude Beijing officials consider disloyal and dangerous. Official plans to promote “patriotism” have gone nowhere so far. When the government tried to mandate “patriotic” versions of Chinese history in schools, student and parent protests blocked it. When Hong Kong University tried to require all students to spend a month on the mainland before being granted degrees, it was shouted down. Current efforts to require all public school teachers to spend two months in China learning more about their official motherland may also fail. There’s been a sharp rise in the number of residents renewing their British National (Overseas) passports, a useful travel document from colonial days.

If the pan-democrats can exploit this anti-establishment attitude and rekindle the enthusiasm of Occupy Central days, they will do well in forthcoming elections. But if public disenchantment prevails, the government side could win by default and deprive opponents of any major political influence, to Beijing’s delight.

The economic impact likewise remains uncertain. Some Hong Kong tycoons had warned that rejecting Beijing’s version of political reform could produce chaotic protests and a sharp downturn. But the main negative impact so far is a retail downturn due to fewer free-spending mainland tourists, which has multiple causes. Yet if future political protests bring strikes, boycotts or other disruption, Hong Kong could see business migrate to places like Shanghai and Singapore.

The American Congress may have a voice in that. Hong Kong has dozens of bilateral agreements with the United States on matters ranging from air travel to money laundering to counterterrorism, separate from those with mainland China. The main task of its trade office in Washington is to lobby on their behalf. But both the House and Senate have pending bills that would require periodic assessments of Hong Kong’s political and civil rights; if passed, Congress someday could decide that Beijing’s strictures have undermined Hong Kong’s special status so much that these separate agreements are no longer justified. If some or all were nullified, the negative economic effect on the territory would be enormous. The subject of Hong Kong was likely discussed when cabinet-level officials of the United States and China met this week [June 23 and 24], and perhaps when President Obama hosts President Xi Jinping in September. The official U.S. view is that Hong Kong’s people should have “a meaningful choice” of candidates for the top office.