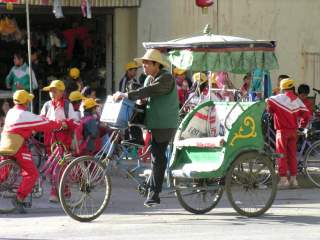 As part of a broad counterterrorism campaign, the Ministry of Public Security recently announced that it would reward people for alerting the police to extremist activities. Local police in each city or province determine how much money to allocate for the initiative. For example, authorities in Urumqi reward those who “report the illegal production and sale of face-covering gowns and clothing that represent religious extremism,” and other information pertaining to terrorist and extremist activities.

Authorities in the Tibet Autonomous Region (TAR) recently stated that police will provide up to 300,000 yuan ($48,000) for information thwarting the “organization, planning, and implementation or incitement” of violent terrorist and religious extremist activities inside China by organizations and their members based at home and abroad. Public security officials are tracking the flow of everything from extremist ideology to illegal audio and visual materials to weapons moving across digital and physical borders.

The text of the TAR announcement is broad in scope. Foreign observers wonder whether this is simply standardized national counterterrorism language, or whether officials are referring obliquely to specific security concerns. However, an examination of media reports provides insight into Beijing’s mindset and emerging policies, particularly in light of the ongoing debate regarding how to frame, approach, and manage self-immolations. The government has vacillated between conciliatory and hardline responses since suicide reemerged as a tool of political protest in ethnographic Tibet in March 2011.

Many leaders believe that Tibetans are grateful for state “benevolence” and would not attempt to undermine social stability unless manipulated by external actors. On the fourth anniversary of the 2008 Tibetan unrest, former Premier Wen Jiabao stated, “we do not agree with the use of this type of extremist action, which interferes with and [ultimately] destroys social harmony. Young monks are innocent, and we feel deep grief over this type of behavior.” The Party pledged to punish those who instigate violence by inciting acts of religious extremism. A Foreign Ministry spokesperson accused the “Dalai Clique” of instigating Tibetans to self-immolate and glorifying rather than condemning violence: separatism “at the cost of human lives is violence and terrorism in disguise.”

Prominent elites are reiterating that the Dalai Lama and his followers “manipulate” religious Tibetans to promote their radical political agenda. Hua Zi, Editor-in-Chief of the China Tibetology Publishing House, wrote that “it is brutal and terrorist behavior to incite young Tibetans… to commit suicide.” Such youth are manipulated by those seeking “to discredit the imagine of the Chinese government and its long-cherished policies in Tibet” in order to “push for the internationalization of the ‘Tibet issue’” and conspire to return to theocratic rule in the name of achieving “independence.” He argued that “religious extremism poses a threat to any country's national security and social stability if not effectively contained and eventually uprooted. Extremism, as endorsed by the Dalai Lama and his clique, seriously taints the image of Tibetan Buddhism and disrupts social order.”

Two high-ranking officials who have worked on Tibet policy echoed the need to combat  perceived separatism, religious extremism, and terrorism. Zhu Weiqun argued that “under the cloak of religion,” separatists “use religious aims, morals and discourses to confuse people's minds, and threat people with various blackmails and ‘benefits’…. devotees, especially some young believers with less education and less understanding of the religion but eager to show their religious piety, may be easily cheated and provide the separatists a spiritual encouragement to expand their followers.” Zhu Xiaoming similarly asserted that the CCP “must fundamentally stop violent extremism and prevent self-immolations” as well as “clean up and eradicate the ideological roots of religious extremism.”

Beijing officially criminalized self-immolations in December 2012, insisting that it would target politically-motivated individuals and groups: “anyone who organizes, plots, incites, coerces, entices, abets, or assists others to commit self-immolations shall be held criminally liable for intentional homicide in accordance with the Criminal Law. Anyone who actively commits self-immolation in which the circumstances are serious and that causes major harm or serious danger to society shall be held criminally liable in accordance with the law.” In effect, however, the Party has detained, arrested, and punished self-immolators, their families and associates, and even entire communities, regardless of whether the state could produce “evidence” of political motivation.

If authorities maintain that the “Dalai Clique” is largely responsible for the organization, planning, implementation, and instigation of self-immolations—and thus guilty of separatism, religious extremism, and/or terrorism—what effect will this have on the political atmosphere in Tibet? If Beijing is implicitly or explicitly branding the exile government as an “external violent terrorist organization,” then officials could use the vague language in its new anti-terror policy to justify arresting anyone perceived to support exile policies.

The blunt fact is that Chinese counterterrorism policies enable authorities to crack down on Tibetan civil society in an unprecedented manner. Scholars and experts must continue to monitor whether policies are implemented in a way that fails to distinguish between legitimate security threats and wholly legitimate acts of political and religious dissent.