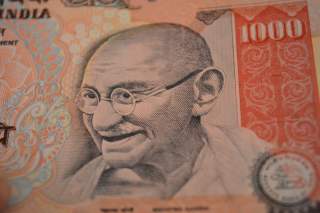 On the same day Americans elected Donald Trump to power, Indian Prime Minister Narendra Modi made a surprise announcement: 500 and 1,000 rupee notes (86 percent of Indian currency in circulation) would no longer be valid.

By New Year’s Eve, Modi was praising his fellow Indians for their forbearance in complying with the abrupt move.

The lack of political backlash so far against the BJP government testifies to the depth of political support for Modi, but the real test will come in key state elections to be held in the next two months.

The government justified the demonetization by claiming it would undermine the black market, pervasive corruption, counterfeiting and tax evasion, while helping to digitize the economy. Replacement currency includes a new 500-rupee note and a 2,000-rupee note.

It’s understandable why the government would want to keep the announcement a surprise, but questions surround the implementation of the currency transition and whether the government had amply prepared for it.

Throughout November and December, people spent hours in long queues at banks and ATM machines as they sought to exchange their old currency or deposit it in banks by the December 30 deadline. Some criticize the government for not printing and circulating the new currency fast enough. At the current rate, critics say, it could take anywhere from four months to a year for adequate currency to be circulated in the economy.

The cash crunch has led to a temporary economic slowdown and speculation that it could result in a half to one percent drop in GDP this year. Trade was disrupted, and cash-heavy sectors like agriculture were also negatively impacted. Spending was curtailed, manufacturing slowed and workers were laid off. GDP levels are expected to recover the following year, however.

The surprise demonetization could delay the long-anticipated implementation of a General Sales Tax (GST) until as late as next fall to avoid more economic disruption. Moreover, it is not yet clear to what extent the currency transition has helped to uproot the black market.

Recognizing the difficulties imposed by the currency transition, particularly those within the informal economy, Modi, in his New Year’s Eve speech, laid out new loan and housing programs for the poor and schemes to increase Indian farmers’ access to loans and debit cards.

If the cash flow problems begin to ease this month, Modi’s political stock will likely remain high. If, however, cash bottlenecks continue into the next couple of months, the BJP brand could begin to tarnish. Modi has built up significant political capital in the first half of his term in office and so far there is little sign of his momentum slowing.

The real test for Modi comes in the form of five key state elections scheduled for February and March. In India’s most populous state, Uttar Pradesh (UP), 403 state assembly seats are up for grabs. The head of the Bahujan Samaj Party (BSP), Kumari Mayawati, has already called on her supporters to target Modi on the currency issue.

The incumbent party in UP, the Samajwadi Party (SP), is mired in a family feud between the current chief minister, Akhilesh Yadav, and his father, Mulayam Singh Yadav, which could end up dividing the party’s vote base.

Another factor that could weigh against the incumbent leaders in UP is their handling of the 2013 Muzaffarnagar communal riots that killed 42 Muslims and twenty Hindus. While the initial cause of the riots is in dispute, the Supreme Court of India ruled that the SP was negligent in not preventing the violence.

Goa, India’s smallest state, has only forty seats at stake. Polls indicate that most Goans support Modi’s demonetization because of hopes that it will rein in corruption and help crush the black market, as the government has promised.

Since Modi has cast his currency swap as a “pro-poor” and “anti-corruption” move, the issue has been a complicated one for other parties to exploit. Another question is how currency restrictions might impact opportunities for vote buying, and what that could mean for election results, especially in UP.

Will the Gamble Pay Off?

Modi’s surprise demonetization was a huge political gamble. Soon we’ll know whether it is likely to pay off. Nearly 700 state assembly seats will be decided in the five upcoming elections, including in Punjab, Manipur and Uttarakhand.

If the BJP does relatively well, Modi will have reinforced that he has the political wherewithal to drive change in the world’s largest and most complicated democracy.