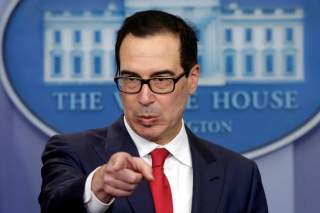 On July 14, 2015, the United States, China, France, Russia, the United Kingdom, Germany, the European Union and Iran signed the Joint Comprehensive Plan of Action (JCPOA), where Iran agreed to limit its nuclear program to peaceful purposes. In exchange, the United States and the EU agreed to lift sanctions against Iran as described in the agreement. The Security Council adopted resolution 2231 endorsing the JCPOA; the U.S. Congress enacted legislation requiring the president to certify every ninety days that Iran is complying with this agreement.

On July 17, 2017, as scheduled, the United States certified Iran’s compliance with the JCPOA. The next day, the State Department announced new sanctions against Iran, citing “Iran’s malign activities across the Middle East which undermine regional stability, security, and prosperity.” In response, Iran’s Foreign Minister Javad Zarif, stated that these new U.S. sanctions violate the JCPOA.

On August 1, Iran, accusing the United States of breaching the JCPOA by enacting these new sanctions, filed complaints with the JCPOA’s Joint Commission and with the UN Security Council. A bill calling for sanctions against Iran, Russian and North Korea was signed into law on August 2, having passed in the House of Representatives and Senate by a vote of 419-3 and 97-2, respectively. Two weeks later, Iran announced it would allocate an additional $260 million for missile development and an equal amount to its Revolutionary Guards’ Quds Force, the Guard’s unit responsible for overseas operations.

A July 19 a New York Times video entitled “Iran Says US Not Complying with the Nuclear Deal” asked, “On Monday, the U. S. recertified that Iran is complying with the terms of the nuclear deal. But is the U.S. itself complying?”

The video quoted Iranian Foreign Minister Javad Zarif and an unnamed Russian official saying that U.S. action is a violation of the spirit and letter of the JCPOA and Professor Daniel Joyner, author of Iran's Nuclear Program and International Law stating that the JCPOA does “not include a general exception for terrorism or anything else.” In a blog posting commenting on his inclusion in this video, Professor Joyner wrote “I do think this is a straightforward case of noncompliance by the U.S. with the JCPOA.”

The Tehran Times was unambiguous: “The US has tried to circumvent the JCPOA by imposing new sanctions against Iran under the pretext of its regional policies.”

The JCPOA does not require Iran to improve its human rights practices, change its foreign or military policies, nor prohibit Iran from launching ballistic missiles. It does however, state the United States (a) “will refrain from any policy specifically intended to directly and adversely affect the normalisation of trade and economic relations with Iran inconsistent with their commitments not to undermine the successful implementation of this JCPOA” and (b) “cease the application of the sanctions” specified under certain provisions of the JCPOA upon the International Atomic Energy Agency (IAEA) verification of Iranian compliance with specified obligations, which it has done eight times since its signing, the last the verification issued on August 31.

Therefore, do recent U.S. sanctions against Iran violate the JCPOA?

In announcing its new sanctions, the July 18 State Department statement specified Iran’s “egregious human rights record,” its detention of “U.S. citizens and other foreigners on fabricated national-security related charges,” that Iran continues to support terrorist groups, the Assad regime, to provide arms to the Houthis in Yemen, and “continues to test and develop ballistic missiles” These same reasons are listed in the August 2 legislation.

The JCPOA does lift sanctions on Iran; its Annex II (“Sanctions-related commitments”) enumerates sanctions the United States and the EU are required to lift if Iran is found in compliance with the JCOPOA. However, as indicated in Annex I (“Nuclear-related measures”), the requirements made of Iran are nuclear-related. The JCPOA makes no non-nuclear related demands on Iran, nor does it prohibit parties to the JCPOA from sanctioning Iran on non-nuclear matters. Otherwise, by signing the JCPOA Iran would be free to engage in foreign policy matters, immunized from Western or UN sanctions.

The Obama administration made clear that lifting sanctions against Iran applies only to nuclear related issues. In his announcement on July 14, 2015, the day the JCPOA was signed, President Barack Obama stated that the JCPOA “doesn’t mean that [it] will resolve all of our differences with Iran . . . [the U.S.] will maintain our own sanctions related to Iran’s support for terrorism, its ballistic missile program, and its human rights violations.”

On July 23, 2015, Secretary of the Treasury Jack Lew testified on the JCPOA before the Senate Foreign Relations Committee: “We have been very clear that we retain our right and we will if we need to re-impose sanctions for reasons that are non-nuclear” even if Iran abides by the JCPOA.

Secretary of State John Kerry also testified: “We will not violate the JCPOA if we use our authorities to impose sanctions on Iran for terrorism, human rights, missiles or any other non-nuclear reason . . . all of our other sanctions authorities remain in place, they’re unaffected by this agreement.” From Secretary Kerry’s written remarks to the committee: “This plan was designed to address the nuclear issue alone, not to reform Iran’s regime, or end its support for terrorism, or its contributions to sectarian violence in the Middle East.”

On January 16, 2016—Implementation Day—when the IAEA affirmed that Iran is complying with specific JCPOA requirements and in return the United States was to lift specific sanctions, the U.S. Treasury Department issued guidance regarding sanctions relief pursuant to the JCPOA. Section VII, Key U.S. Legal Authorities That Remain in Place After Implementation Day, lists the same issues found in the 2017 State Department Sanctions and Congressional legislation: Iran’s support for terrorism, human rights abuses, ballistic missile launching, and destabilizing actions in Syria and Yemen.

Testifying before the Senate Foreign Relations Committee on April 15, 2016, then Under Secretary for Political Affair Thomas Shannon “assured[d]” the committee that the administration “shares its concerns” about “Iran’s actions beyond nuclear issues,” listing Iran’s human rights abuses, ballistic missile program, support for Hezbollah, Assad and the Houthis.

The JCPOA’s Joint Commission statement issued on July 21, 2017 stated: “The parties welcomed the latest report from the IAEA verifying Iran's continued adherence to its nuclear-related commitments.”

This statement comports well with Iranian pronouncements. On August 28 Press TV quoted the head of the Atomic Energy Organization of Iran who “reiterated Iran’s compliance with all its commitments under the JCPOA.” On August 31 it published that according to the latest IAEA report, Iran did not exceed its nuclear allowable limits under the JCPOA.

Recent U.S. sanctions against Iran, consistent with the 2016 Treasury Department guidelines, however, were triggered by Iran’s non-nuclear activities not covered by the JCPOA.

A July 20, 2017 Voice of America article on the State Department’s newly released Country Reports on Terrorism was entitled “Islamic State, Iran Still Top Terror Concerns.” On the second anniversary of the signing of the JCPOA—July 14, 2017—the UN held a briefing on the implementation of Security Council resolution 2231 where the delegates from Saudi Arabia and Yemen referred to letters of complaint their governments sent to the UN Secretary-General regarding Iranian destabilizing activity in the region including support for Hezbollah and the Houthis.

A section of a 242-page report dated January 31, 2017 prepared by the UN’s Panel of Experts on Yemen is entitled “Probability of large-scale supply of weapons from the Islamic Republic of Iran to Yemen.” Security Council resolution 2216 (2015) imposes an arms embargo to the Houthis in Yemen.

On June 23, 2017, Gen. Herzl Halevi, head of IDF Military Intelligence publicly confirmed that Iran is building weapons factories in Lebanon for Hezbollah. Two days later the Israeli press reported that General Halevi recently visited New York to brief Security Council ambassadors on this development and that Israel sent messages to Iran via European countries, stressing it “will not tolerate” these Iranian arms factories in Lebanon. On August 17, Israel media reported that Iran is similarly constructing missiles factories in Syria, a report picked up by the New York Times on August 29.

The JCPOA deals with nuclear-related matters such as centrifuges, enrichment and heavy water; it is silent on Iranian ballistic missile launching. Security Council resolution 2231 however states: “Iran is called upon not to undertake any activity related to ballistic missiles designed to be capable of delivering nuclear weapons, including launches using such ballistic missile technology.”

Iran and its supporters put forth several arguments why ballistic missile launches violate neither the JCPOA nor resolution 2231.