Do Values or Interests Guide U.S. Policy? With China and North Korea, It's Hard to Tell. 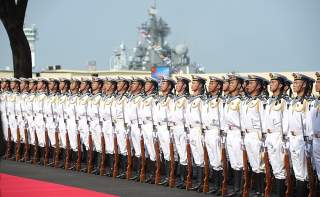 When Hillary Clinton made her first visit to China as secretary of state in 2009, she stressed the need for economic cooperation. But then she startled human-rights advocates by declaring that “our pressing on those issues can’t interfere with the global economic crisis, the global climate change crisis, and the security crisis.”

I joined in the criticism: “Trade trumps human rights.” Of course, Clinton was just making explicit what had long been implicit in U.S. policy toward China. In 1989, pursuing good U.S.-China relations, high-ranking officials of George H. W. Bush’s administration clinked glasses with Deng Xiaoping days after he ordered the massacre of thousands of young Chinese in Tiananmen Square.

At the end of it, it is strengthening our national security and promoting economic prosperity for the American people. . . .

It’s important to also remember that guiding all of our foreign policy actions are our fundamental values: our values around freedom, human dignity, the way people are treated. Those are our values. Those are not our policies; they’re values. And the reason it’s important, I think, to keep that well understood is policies can change. They do change. They should change. Policies change to adapt to the – our values never change. They’re constant throughout all of this.

So we have permanent interests (national security and economic prosperity), permanent values (freedom, human rights), and situational policies that serve both imperatives.

Tillerson did not mention an example where America’s interests and values converge: the U.S. air strike on Syria that punished Bashar al-Assad’s chemical-weapons attack on his own people. The United States was instrumental in establishing the international norm that bans the use of such weapons, whether against U.S. forces or civilian populations. Presidents Obama and Trump both proclaimed that vested national and moral interest. Obama drew a vanishing red line on it. Trump acted on it.

Of course, Assad massacred five hundred thousand people, and sent millions in a refugee flood to Europe and beyond, using mostly conventional weapons—a humanitarian outrage that violates both America’s moral values and the United Nations doctrine of responsibility to protect. R2P imposes a moral obligation on the international community to protect civilian populations against atrocities committed by their own governments. In Bosnia, half as many Muslims as in Syria were killed, as the Bush and Clinton administrations looked away. Obama absconded on his American and international responsibilities for six years. How the Trump administration deals with the crisis will be a defining moment.

But, as Tillerson said, with an ever-changing hierarchy of concerns, we are compelled to ask: “What’s the hottest fire that we’ve got to deal with?”

Unfortunately, it has long been true that trade has also trumped national security itself.

The Defense Department traditionally deals with pressures from the Commerce Department and U.S. companies eager to see legal restrictions lifted so that they can profitably transfer U.S. technology to China (and other unfriendly places). Over recent decades, great quantities of valuable technical know-how have flowed to the People’s Liberation Army in the form of “dual-use” technology with both civilian and military applications. Lenin proved prescient when he said the West would “sell us the rope with which we will hang them.”

The military-to-military program is another way the United States—in the interest of good relations, especially economic—knowingly strengthens the military capabilities of a potentially hostile China. In 2014, the Congressional Research Service reported on the risks and benefits of allowing the Chinese military close observation and interaction with U.S. armed forces—“whether the contacts contribute to the PLA’s warfighting capability that might harm U.S. and allied security interests” and grant excessive “leverage to the PLA.”

Similarly, think-tank studies and academic conferences regularly catalogue the deficiencies of China’s military, helpfully providing Beijing with how-to guidance for improvement. Projections would invariably put the China threat far into the future. It would be ten or twenty years or more, for example, before the PLA and its naval and air force components could develop the amphibious or air cover capabilities to successfully invade Taiwan. Until then, Western experts joked, the only threat was from the “million-man swim.” But the ten-to-twenty-year goals were accomplished in five to ten.

One think-tank head disparaged the PLA’s failure to meet the standards of a truly professional military, and detailed the measures it must implement to modern and professionalize. In all these cases over the years, China’s strategic planners did not take offense; they took the advice. Absorbing the constructive criticism, they dutifully made the necessary corrections and adjustments to advance and accelerate their massive military buildup.

In fact, things got a lot out of balance, and today, thanks to Western support, America faces a formidable new military threat from China rivaling that we confronted in the Cold War.

In addition to directly strengthening China’s military capabilities and obscuring the emerging military danger we were helping to create, overemphasis on trade has undermined U.S. national security by distracting us from confronting the North Korean nuclear and missile threat.

Washington has long known that Beijing is the key to resolving the Pyongyang problem, but it accepted China’s assurances that it shares the Western goal of a denuclearized Korean Peninsula. Despite the contrary evidence of China’s assistance in North Korea’s nuclear and missile startup, and its protective, enabling role ever since, the United States has refrained from imposing serious economic sanctions on China, and China in turn continues to give North Korea a pass.

Almost a quarter of a century after the United States withdrew its tactical nuclear weapons from South Korea, it is perfectly clear that the only Korean nukes that ever really bothered Beijing were those south of the thirty-eighth parallel. Pyongyang’s nuclear and missile programs, instead, have served Beijing’s strategic interests well by distracting Washington from the looming China threat while enhancing its stature as a putative responsible international stakeholder.

But Tillerson says that all that is about to change: “The assumption was that China has limited influence on the regime in Pyongyang, or they have a limited willingness to assert their influence. And so I told the President we’ve got to test that, and we’re going to test it by leaning hard into them, and this is a good place to start our engagement with China.”

What form the “leaning hard” will take remains to be seen, but so far, the Trump administration seems to have softened its line on a number of China issues: the president’s freedom to talk with foreign leaders, such as Taiwan’s president Tsai Ing-wen; the status of America’s one-China policy; labeling Beijing as a currency manipulator; and—something the secretary mentioned only in passing—China’s aggressive actions in the South China Sea.

Tillerson had said at his confirmation hearing that the U.S. Navy might have to block China’s access to its illegal man-made islands, but now Washington has thrice denied the Seventh Fleet permission to conduct normal freedom-of-navigation operations. Presumably, they would not be the counterproductive innocent passages the Obama administration conducted—which essentially ratified China’s claims of territorial waters. Serious FONOPS in those waters are long overdue.

What has the administration gained on North Korea so far in return for its restraint and even accommodation in other areas where Beijing is challenging and causing trouble for Washington?

Tillerson stressed that China’s role is critical and laid down a marker, the same one President Trump has declared: “We’ve told them we’re watching what you’re doing. . . . If you can’t take care of it or you simply don’t want to take care of it for your own internal political reasons, we will.”

Time is running out to call that marker given North Korea’s recent missile test, its seventh under the Trump administration, which appears to have significantly advanced its ability to marry an ICBM with a nuclear warhead. While it is possible the United States may have contributed to the failure of some of the earlier tests, the latest was directed vertically so as not to invite a U.S. military countermeasure, yet still moved the program forward in violation of international law.