Do You Hear The Deplorables Sing? 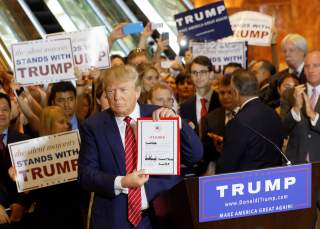 Donald Trump’s poll numbers sank after the Republican National Convention back in August and never quite recovered. Sure, he found a modest springboard or two, after the presidential debates and following the FBI’s announcement a couple weeks ago that it was recommencing its investigation into Hillary Clinton’s emails. But he never took a consistent lead, struggling against an electorate that, while restive, seemed to have nonetheless decided to sign on with its safe school. Hillary proponents began chattering about quixotic electoral wins: Arizona and Georgia and Texas. The drapes merchants pulled up in front of the White House.

And then came the tide of red. I don’t think it’s hyperbolic to say that last night was the biggest electoral shock in modern times. Independent of the Trump campaign (inept), the media (pro-Hillary), and the pollsters (utterly and spectacularly discredited), Trump voters turned out en masse. These were the deplorables, the unwashed insurgents of Dickens’ and Zola’s grimiest portrayals, or at least that’s how they believed themselves portrayed by the political class. Hillary actually called them that; her husband taunted the “coal people.” Now, they’ve had their revenge exactly where you might have expected, securing stunner wins for Trump in Wisconsin, Michigan, and Ohio, America’s deindustrialized upper torso, seething at a Democratic Party that abdicated its responsibilities to them long ago. Throw in Florida, North Carolina, and New Hampshire, and you had yourself a path to victory, and a wide one that will set the standard for Republican politicians going forward.

I remember, after George W. Bush won in 2000, heady Republicans postulating that they could expand their presidential map into the Upper Midwest, as part of that realignment Karl Rove was dreaming about. Credit Trump: he actually made it happen, crafting a message that rallied blue-collar workers as no Republican since Ronald Reagan has. Last night, Trump took early leads all over the Electoral College, but for Clinton hope was found in Virginia, where a late resurgence in that state’s northern federal enclaves was enough to secure a win. Democrats no doubt hoped other states would follow suit, but there wasn’t another Northern Virginia, a deep liberal well—government workers and the political class, as averse to Trump as he is to them—into which Clinton could dip her bucket.

Whereas Obama won Detroit’s Wayne County with 73 percent in 2012, Clinton mustered only 66 percent; whereas Obama claimed Cleveland’s Cuyahoga County with 69 percent in 2012, Clinton again won 66 percent. A diaspora of union households away from the Democratic Party had begun, and the supposedly impending surge of women, Hispanic, and Millennial voters wasn’t enough to compensate. Clinton often acknowledges that she isn’t a political natural like Barack Obama or her husband, but surely she wasn’t anticipating this, a loss to one of the most vulgar and polarizing figures ever to lumber across the political stage. As the night wore on, the frantic hosts at CNN started stepping on each other. “Let’s look at Virginia! No, Pennsylvania! New Hampshire! Ah!! Go back!” Jeffrey Lord was all smiles.

The Orange Revolution is now victorious, and everything will have to change. The reality is stark: many of our fellow countrymen were so desperate to force political change that they detonated a neutron bomb. It’s a Jacobin impulse—burn it all down and start anew—and it will compel a response from our leaders. Our foreign policy, shipping soldiers overseas to fight in futile wars, is no longer tenable. The protectionist volumes of yesteryear have been reopened in a puff of dust. The Wall Street Journal’s flavor of conservatism, with its loosey-goosey borders and free flow of capital—whatever its merits—has been repudiated. Perhaps we won’t see that change reflected in policy, but our politics will be transformed—they’ll have to be.

A country as variegated and wild as ours is never going to wholly unite and we shouldn’t pretend otherwise, but the polarization we have undergone over the past year has seared us. My Facebook feed was alive last night, with Trump supporters exuberating that they finally have representation in Washington, with Clinton supporters lamenting the death of our way of life, two sides that are in no way complimentary, singing from different hymnals, viewing the world through different lenses. There is great diversity within those camps, but the chasm stretches between them nonetheless. It wasn’t James Comey, it wasn’t the Billy Bush tape, it was that which vaulted Trump over the top.

Hillary Clinton refused to appear in public last night, no doubt feeling like her innards were caught in a vice, but she did call Trump to concede, and after 2:30 a.m. he at last appeared at his campaign headquarters in New York. It was an uncharacteristically gracious speech replete with accolades for his opponent. “It is time for us to come together as one united people,” he said, before inviting onstage and draping his arm around Reince Priebus, who looked like he should have been wearing a beanie—the Trump-Republican merger in the flesh. Then: “The forgotten men and women of our country will be forgotten no longer.” Those deplorables sang loudly last night, and they prevailed, but at what cost?