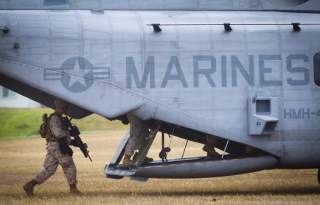 Decades ago, Secretary of Defense Robert McNamara asked the simple question: how much is enough? The answer, of course, is not a number but rather another more difficult question: enough for what? As the U.S. military embarks on a new operation in the Middle East and as members of Congress return to their home districts to campaign, these questions remain unresolved.  Should the military be resourced to fight terrorist groups like ISIL, counter Russian moves in Eastern Europe, balance China’s rising power and influence in the Asia Pacific region, fight Ebola in Africa, or some combination of these?

The level of defense spending needed depends, among other things, on one's strategy, risk tolerance, support provided by allies and partners, and the roles and missions assigned to the military. The 2014 Quadrennial Defense Review (QDR) and 2012 Defense Strategic Guidance (DSG) provide the best available insight into current defense strategy, specifying the roles and missions assigned to the military and the force structure needed to support those missions at what the Department deems to be an acceptable level of risk. These strategy documents, however, do not fully account for the spending constraints put in place by the Budget Control Act (BCA) of 2011 as modified by the Bipartisan Budget Agreement of 2013. The key question, then, is how much of a gap exists between the current defense strategy and the resource constraints imposed by the BCA?

The FY 2015 budget request does not fully answer this question.  While the budget request exceeds the BCA budget caps by $116 billion over the next five years, it appears to be insufficient to execute the defense program articulated in the QDR and DSG. In particular, the budget does not fund Army and Marine Corps end strength and Navy aircraft carriers to the levels stated in the QDR. Assuming this force structure is needed to execute the defense strategy at an acceptable level of risk, the budget appears to be roughly $20 billion short over the next five years.

The budget request also assumes that Overseas Contingency Operations (OCO) funding for Afghanistan can be used to offset some costs typically funded in the base budget. The OCO budget for FY 2015 appears to be roughly $35 billion higher than required for operations in Afghanistan. DoD has not submitted a projection for OCO funding for FY 2016 through FY 2019, so it is impossible to know precisely how much its future plans depend on using OCO funding for base budget activities. Given recent trends, however, it is reasonable to assume that DoD may be counting on an average of $10–20 billion in annual OCO funding for base budget activities, for a total of $50–100 billion over the Future Years Defense Program (FYDP).  Also, as events unfold in Iraq and Syria, DoD may need to divert additional funding to this new operation.

The budget also assumes some savings that are unlikely to materialize in future years. Anticipated savings from a series of initiatives designed to increase the efficiency in the use of defense funding now total hundreds of billions over the FYDP. Savings from the proposed changes to military compensation included in the FY 2015 request total roughly $31 billion over the FYDP. These savings are effectively “spent” within the budget, and if some portion of these savings does not materialize, as seems almost certain, the defense program will be further under-resourced.

Acquisition programs are also likely to exceed their projected costs. Historically, major acquisition programs often exceed their initial cost estimates by 20 to 50 percent. Because these programs are not budgeted for future cost overruns, the acquisition funding in the budget is likely insufficient to execute all of the currently planned acquisition programs. Similarly, operations and maintenance (O&M) funding has historically exceeded DoD’s budget projections. Thus the level of O&M funding in the budget may also be insufficient to fund training, maintenance, and peacetime activities at the levels currently planned—especially if Congress rejects DoD’s plans to retire legacy platforms like the A-10.

In total, DoD could require $200–300 billion more over the FYDP than the BCA budget caps currently allow in order to execute the defense program and the force levels detailed in the QDR and DSG. The shortfall could be more or less depending on the success of DoD’s efficiency initiatives, Congress’ willingness to enact some of the proposed changes to military compensation and retire legacy weapons, and the ability of DoD to continue using OCO funding to offset reductions in the base budget.

This projected shortfall should not come as a surprise. The FY 2013 budget request, submitted concurrently with the 2012 DSG, was designed to fund the strategy at an acceptable level of risk before the BCA budget caps were passed into law. The difference between the FY 2013 budget projection and the BCA budget caps is roughly $272 billion over the current FYDP period (FY 2015 to FY 2019).

DoD’s plans rely on the willingness of Congress to raise or eliminate the BCA budget caps. While Congress has twice altered the budget caps since they were enacted, DoD’s share of the budget caps for FY 2015 was only raised by roughly $6 billion from the original level. In the FYDP, DoD implicitly assumes Congress will raise the FY 2016 cap by $35 billion, effectively granting DoD a real increase in funding of 6 percent from the FY 2015 level. If Congress acts as it has in the recent past, it may again wait until the last possible moment to raise the FY 2016 budget caps, but only marginally, leaving the caps for subsequent years unchanged.

Rather than hoping that Congress will increase projected funding levels, DoD could instead alter its defense strategy to fit within the budget constraints set by Congress. DoD could revisit the 2012 DSG and narrow its strategic objectives by shedding missions, developing innovative concepts to execute existing missions with fewer resources, accepting a greater degree of risk in some areas, or simply divesting some security commitments.

Deputy Secretary of Defense Bob Work’s recently announced effort to create an “offset” strategy is an example of an effort to develop innovative concepts and more effective capabilities to compensate for a reduction in resources.  An offset strategy can leverage the U.S. military’s advantages, such as technological superiority in unmanned systems, long-range and low-observable aircraft, and undersea operations, to offset the reductions in force structure budget constraints will require and the increasingly sophisticated capabilities being fielded by adversaries.  Such an approach would effectively exploit a qualitative advantage to compensate for a quantitative weakness.

An offset strategy alone may not be enough.  DoD may also need to reduce or eliminate support for certain missions, such as building partner capacity or conducting humanitarian assistance and disaster relief operations. Likewise, it could also reduce the level of forces committed to the defense of certain allies around the world. Shedding missions or security commitments would reduce force level requirements and help close the gap between strategy and resources, but not without the potential for incurring serious consequences for U.S. security.

DoD could also simply accept a greater degree of risk in executing the strategy, which itself can be a strategic choice.  The Department could assume a greater degree of near-term risk by reducing the size and readiness of the force but protecting investments in future capabilities—effectively trading an increase in near-term risk to reduce long-term risk.  Conversely, the Department could take more long-term risk by cutting capability investments to protect current force levels and near-term readiness.

Over the past three years, CSBA has conducted a number of strategic choices exercises throughout the defense community challenging participants to tackle these complex problems by rethinking the defense strategy and defense program under BCA budget constraints. Rather than simply cutting programs and forces to meet the budget constraints, most teams have used the cuts as a forcing function to make difficult strategic choices by rebalancing DoD’s portfolio of capabilities, protecting or increasing funding for high priority capabilities, and divesting or accepting greater risk in low priority capabilities. While the strategies and associated priorities pursued by teams have differed, a common theme has been the need to make strategically informed investment and divestment decisions rather than just shrinking the size of the force.

A major shortcoming of the FY 2015 defense budget and the QDR released this spring is the strategy-resource mismatch.  To reconcile this mismatch, DoD should either submit a budget that fully funds the strategy or revise its defense strategy to fit within the resource constraints of the BCA.  The former would clearly articulate the resources required to execute current defense strategy.  The latter approach would convey the strategic risks and limitations current funding constraints impose. To date, DoD has done neither.  The Department has instead pursued a middle course that embraces a defense program and posture that exceeds the BCA budget caps, while simultaneously failing to produce a force posture that meets the minimum requirements for executing the defense strategy. This compromise approach may be the worst alternative available because it commits the military to more than it can afford without fully acknowledging the real risks and strategic limitations involved.  If DoD continues this approach in the FY 2016 budget request, it should expect nothing different from Congress—minimal relief from the BCA budget caps and limited flexibility to make internal reforms and retire legacy weapons.