Does Assad Really Have Time on His Side? 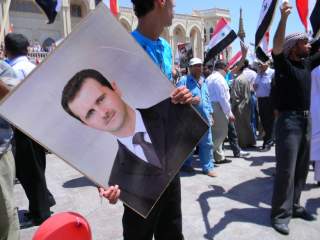 That President Bashar al-Assad sees time as working in his favor in the Syrian Civil War is evidenced by his disregard for internationally brokered ceasefires. And it is true that in the international arena, his relative situation appears to be steadily improving, as the discussion of a viable moderate rebel fighting force has all but died out. However, at the same time, the Assad regime’s ability to function as a fighting and governing force is being steadily degraded by the grinding civil war and the growing cracks in its bases of support. Therefore, despite its vow to continue fighting and retake every inch of Syria, the Assad regime is unlikely to dramatically expand its control over Syrian territory in the near future.

The rebels’ image as both extreme and divided has been an important factor in improving Assad’s image as the only reasonable option in Syria. Since the uprising’s militarization, there has been a clear trend towards the radicalization of anti-Assad forces, such as large-scale defections from the Free Syrian Army to jihadist groups like ISIS and Jabhat al-Nusra (now Jabhat Fatah al-Sham)—for a variety of reasons, including their comparative success, higher wages and ideologies. This continues to reinforce the idea that “moderate opposition” in Syria is little more than a myth, and deter any Western efforts at arming these groups out of fear that they could become jihadists and turn their weapons on the West. The recent footage of U.S.-backed rebel forces chasing U.S. commandos out of al-Rai while chanting anti-American slogans did little to dispel that notion or engender goodwill from the West. Furthermore, the perception of the rebels as hopelessly divided was reinforced by infighting in the power vacuum created after a Russian airstrike killed Jaysh al-Islam’s Zahran Alloush (which allowed Assad to make inroads in the areas surrounding Damascus).

In contrast, the Assad regime’s fortunes are changing for the better in the international arena. In August 2016, Chinese officials took a bold step beyond their general opposition to interference in domestic affairs of sovereign nations by declaring that they would be providing training to Syrian military personnel as well as humanitarian assistance to the Assad regime. Similarly, there are indications that Ankara is ready to abandon its anti-Assad position and reach an understanding with Damascus in order to cooperate against the Kurds. For example, in August of 2016, the Turks, in an action that was probably coordinated with the Syrians, Russians and Iranians, cut off a major jihadist supply line in the border town of Jarablus in order to prevent complete Kurdish control over the region the Kurds call Rojava. In the previous summer, there is no doubt that nuclear agreement (JCPOA) improved the positioning of the Assad regime in several ways: it improved the economic situation of Assad’s backers in Tehran, it forced the U.S. administration to proceed with caution in Syria to avoid scuttling the deal and it allowed Iran to update the aircraft used for supplying arms to Damascus. Furthermore, the consensus that regime change failed in Libya and Iraq has resulted in widespread anti-interventionist attitudes, causing many to declare their opposition to toppling Assad by saying, “Syria will not become another Libya.”

Yet, this does not translate into an actual opportunity for the Assad regime to dramatically expand its direct control of Syrian territory, because it does not negate domestic issues such as the declining ability to maintain a centralized and cohesive fighting force and poor governance in areas under regime control.

Since 2013 there have been assessments that, in the words of Qassem Soleimani, “the Syrian Arab Army is useless!” The situation has only become more severe in recent years due to high casualty and defection rates. Because the battered and exhausted Syrian Arab Army is spread so thin, foreign forces and local militias play an outsized role in the civil war. The decentralization of military control throughout the country has accentuated conflicting interests among different pro-regime groups, which has even resulted in clashes among these forces on the battlefield in May 2016 and June 2016. While foreign forces have been instrumental in reversing the tides of the war in 2015, and one could argue that they will be instrumental in facilitating the regime’s expansion, in a piece I wrote with my colleague, Vera Michlin, we explained that the Russian and Iranian military interventions had stabilized the Assad regime but not facilitated its conquest of significant swaths of territory by any measure. Also, the foreign military presence is reported to be a divisive issue among senior Syrian national security officials. Most famously, Rustom Ghazaleh, the chief of Syria’s Political Security Directorate, is rumored to have been killed in April 2015 because of his opposition to extensive Iranian involvement in Syria.

As for governing the civilian population, there has been a growing voice of discontent even among the Alawite backbone of the regime, as evident from their protests against corruption and security lapses as well as the Alawite religious establishment’s disavowal of the Assad regime. Since the outbreak of the war, the notorious corruption among Syrian government officials is reported to have become even more severe, as the steep decline in the value of Syrian currency has led state employees to supplement their wages with bribes. (Transparency International’s 2015 survey of perceived corruption placed Syria at 154 out of 168 countries.) Because Assad appeals to the Syrian people on issues such as stability and governance, which are hardly the regime’s strong suits, he has had no choice but to make life in rebel-held territory miserable in comparison by raining down barrel bombs. It seems, however, that making life unbearable on the other side of enemy lines is not a panacea for one’s own citizens’ complaints.

Considering the numerous problems plaguing the regime, the Assad regime’s ability to retake and hold additional and even more hostile population centers appears extremely limited. Syria expert Aron Lund rightly notes that controlling a hostile population will present a nearly impossible task, considering many of the regime’s local networks for control have been destroyed. Therefore, though Assad may perceive time to be working in his favor as the Syrian Civil War drags on and his image is rehabilitated around the globe, it appears that he is the one who needs to “wake up” from the fantasy that his overstretched, fragmented and corrupt regime can reconquer and hold much more of Syria.

Ari Heistein is the Special Assistant to the Director of the Institute for National Security Studies (INSS) in Israel.