Does the Assault on the Capitol Show America Is Doomed? 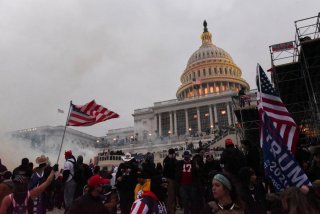 Most one-term presidents are forgotten. Donald Trump is not likely to suffer that fate. In terms of the impact that he always craves, the sordid storming of the U.S. Capitol by a mob that included a “QAnon Shaman” yesterday sealed the deal for him. It was a true first—and the one thing that will define his presidency.

Washington is moving on from Trump. “Count me out,” Sen. Lindsey Graham announced yesterday. Other Republicans are seizing upon the tumult in the Capitol to distance themselves from Trump. Mick Mulvaney has resigned from the administration. So has deputy national security adviser Matt Pottinger. But perhaps the ultimate humiliation for Trump came when he tweeted out via his aide Dan Scavino’s account that a peaceful transition would take place. So powerless is Trump that he couldn’t even access his cherished Twitter account, which had been locked for twelve hours. He’s also been banned from Facebook for the duration of his presidency. So much for America’s first social media president.

But will America itself be able to move on from the violence that took place yesterday? A look at the past year indicates that there has been a steady escalation in violence. During the summer the left staged numerous protests against the police in Portland and Atlanta. Seattle became an “autonomous zone.” In Kenosha, Wisconsin, several city blocks were trashed. New York Times journalist Nikole Hannah Jones stated, “Violence is when an agent of the state kneels on a man's neck until all of the life is leached out of his body. Destroying property, which can be replaced, is not violence.” Destroying property is not violence? There are some things, in fact, that cannot be replaced.

Yesterday, Trump delivered a desultory speech in which he finished by exhorting his followers to march on the Capitol. Trump said, “we’re going to the Capitol.” He didn’t. He had no intention of conducting a Mussolini-like March on Rome. But his fans were game.

Whether Trump expected them to attack Congress or not, they did. He clearly enjoyed the melee, praising them in several tweets that were later deleted. Vice President Mike Pence, whom Trump berated for insufficient loyalty, had to be hustled out of the Senate. Trump likely enjoyed that. In the afternoon, he issued a halting video asking them to disassemble peacefully and condemning the results of the election once more. Some of his supporters will be heading to jail, while Trump gets to luxuriate poolside at Mar-a-Lago after January 20.

The question facing America is whether it is heading down the path of Weimar Germany. Writing in American Purpose, Aaron Sibarium noted that there are some distinct overtones of that era in America: a third of both Democrats and Republicans now say there is some justification for political violence, a fourfold increase since 2017. The depressing statistic highlights the speed and symmetry of polarization, the breakdown of norms needed to channel it, and the potential for polarization to get much worse—for as Weimar’s Social Democrats discovered, the response to political violence can easily feed the resentments that stoked it, begetting more violence in return.”

In a provocative essay in Tablet, Michael Lind asserts, “two shocking events symbolize the abdication of authority by America’s ruling class, an abdication that has led to what can be described…as the slow-motion disintegration of the United States of America in its present firm.” Lind locates the first on June 8, 2020 when Seattle police evacuated their East Precinct building and allowed the creation of an anarchist commune. Lind argues,

“The leaders of both parties have weaponized anarchic mobs against their rivals—the Democrats, by tacitly encouraging and bailing out foundation-funded NGO staffers with secret identities and superhero-style Antifa outfits during the tolerated anti-Trump riots of Summer 2020, and now the squalid, defeated demagogue Donald Trump, unleashing his own costumed followers on the U.S. Capitol itself.”

In this version of America’s future, it will resemble the late Roman Republic when Cicero and Clodius each had rival gangs attacking each other in the streets, a model that Weimar Germany emulated to the hilt, as various political parties, ranging from the Nazis to the Socialists to the Communists, each led paramilitary forces. The result was to delegitimize the regime.

Joe Biden is promising to restore comity in America. “It is time for us to come together as a nation to heal,” he likes to say. But was the assault on the Capitol the last scene in the drama of hatred that has gripped the country? Or was it an augury of something darker?