Does the Blinken-Lavrov Meeting Signal A Thaw In U.S.-Russia Relations? 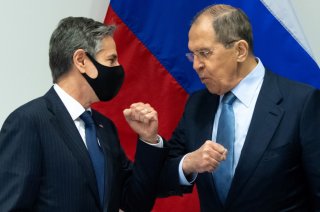 U.S. Secretary of State Antony Blinken met with Russia’s Foreign Minister Sergey Lavrov in Reykjavik on Wednesday. The talks, which mark the highest-level public meeting between U.S. and Russian officials since President Biden took office in January, were held on the heels of earlier reports that the Biden administration will waive U.S. sanctions on the company overseeing construction of the Nord Stream 2 pipeline. The Biden administration has likewise pursued a measured response to the recent Colonial Pipeline hack, noting that it came from a criminal group within Russia but stopping short of calling it a Kremlin-sponsored cyberattack.

Blinken's tone was anything but confrontational. Instead, it was diplomatic, professional and measured. “There are many areas where our interests intersect and overlap, and we believe that we can work together and indeed build on those interests,” said Blinken. “It is our view that, if the leaders of Russia and the United States can work together cooperatively, our people, the world can be a safer and more secure place,” he added. Lavrov’s opening remarks accented the many policy disagreements between the two sides, but expressed hope that the two sides can work together on “issues of strategic stability.”

“We seriously diverge in our assessment of the international situation and our approaches towards how we should resolve it,” Lavrov said. “Our position is clear: we are ready to discuss all issues without exception, on the understanding that the discussion will be honest, factual, and conducted with mutual respect. The laws of diplomacy recommend mutuality, especially when it comes to a response to any kind of hostile actions. Our task is to make the best of the diplomatic opportunities we have, and we appreciate that you demonstrate such an approach,” he noted. “Not exactly similar views but similar goals,” emphasized Lavrov, without the help of a Russian translator.

Lavrov and Blinken offered a sampling of the policy fronts on which Moscow and Washington can work together; for both diplomats, these areas include Iran’s nuclear program, Afghanistan, and the Korean peninsula. In what could be a major step toward the stabilization of relations between the two countries, Lavrov signaled a willingness to review the situation surrounding the two countries' diplomatic missions. The Kremlin recalled its ambassador to the United States Anatoly Antonov in March, shortly following Biden’s comments on Russian President Vladimir Putin during an interview with ABC News's George Stephanopoulos. Washington followed suit in April, recalling the U.S. Ambassador to Russia John Sullivan for “consultations” after explicit nudging from Moscow.

With the two sides expressing a broad willingness to cooperate, despite deep-seated policy differences, the Blinken-Lavrov meeting could set the tone for a possible summit between President Joe Biden and President Putin later this summer. Biden, who proposed the summit to Putin in a phone call last month, hopes to establish a clear line of communication with his Russian counterpart. The Kremlin is reviewing--but still has not formally accepted--the proposal, with the two sides reportedly working out the details of a prospective meeting. If it does, the meeting between Blinken may prove to be an important step on the road to a less fraught relationship between Moscow and Washington, a step that Biden clearly wants to take, not least because he remembers the perils of the Cold War and because he sees Beijing as America's chief adversary. It would be a fundamental mistake for Moscow not to take his professions of interest in improved ties seriously.