Does Howard Schultz Have a Real Shot at Defeating Trump? 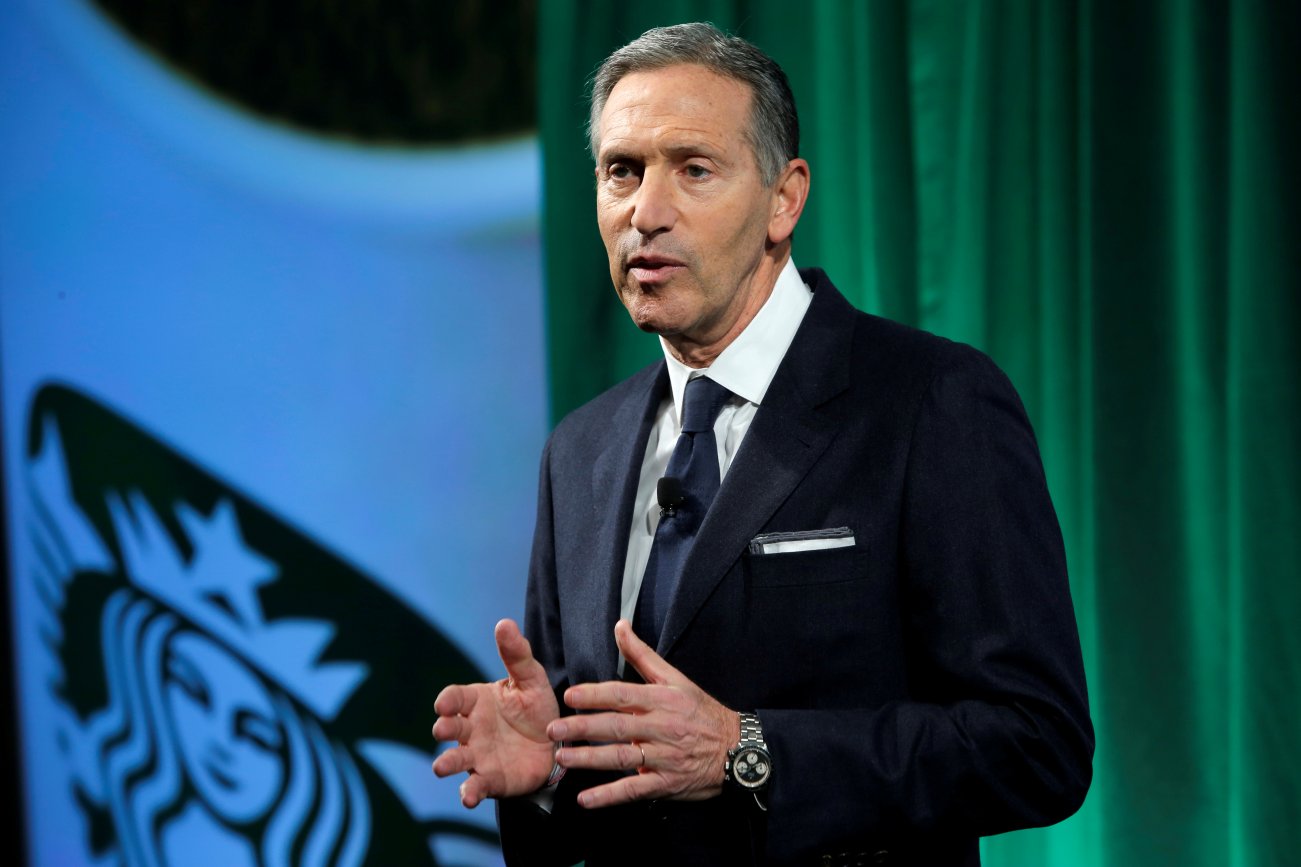 Ask yourself a question: Going back four years ago today, as the 2016 presidential campaign was just beginning to heat up amid hints that Donald Trump might run, did you think he had any chance in the world to win the GOP nomination, let alone the presidency?

Thought so. What this tells you is that American politics is a parade of surprises, including developments that seem inconceivable before they happen but afterward take on a coloration of being commonplace. The Trump election is a vivid example.

Now we have hints from former Starbucks CEO Howard Schultz that he may run for president next year as an independent candidate—funded in large part, presumably, by his own fortune born of his business brilliance. Howls went up immediately that he would be a “spoiler” in the race, split the anti-Trump vote, and almost single-handedly award Trump with a reelection victory. Besides, it was emphasized, he can’t win.

Probably he can’t. But maybe he can. We just don’t know, rather like we couldn’t know four years ago that Trump actually could become president.

As Schultz makes up his mind on whether to run—and whether he can withstand the opprobrium of Democrats who are “shrieking like teenagers at a horror movie,” as the Wall Street Journal puts it—some observations may be in order.

First, if ever there were a time in American politics when there could be a prospect for an independent victory, this may be it. The country’s political situation is intrinsically unstable. Trump has captured the reins of the Republican Party, but many Republicans recoil at the idea of having him as their party’s leader. And Trump’s public opinion approval numbers since his election, between around 39 percent.

If Trump looks like a loser as the campaign year unfolds, then his base support could erode significantly. That could destabilize the country’s political situation further.

Then there is the Democratic Party, lurching to the Left at the behest of such figures as senators Elizabeth Warren and Kamala Harris, not to mention the new crop of outspoken leftists and socialists who emerged in last year’s congressional elections. They have brought to the fore within the party such policy prescriptions as Medicare for All, a 70 percent top individual tax rate, and a truly confiscatory “wealth tax” on billionaires.

Many Democrats will embrace these ideas, but others won’t. And the emergence of a new party establishment of the Left, which seems to be in the works, will leave many Democrats uncomfortable, if not downright angry. That will destabilize the situation even further.

Independent presidential candidates gain sway in turbulent campaign years, which 2020 figures to be. Thus, while there’s no reason at this point to predict a consequential Schultz surge in the general election, it shouldn’t be discounted, either. Voters are going to be angry, frustrated, fearful, and wracked with concerns about the state and direction of their country. That’s a recipe for voters casting a serious look at fresh electoral options.

Second, let’s explore the idea that Schultz would split the anti-Trump vote and hence deliver a reelection victory to the president. It’s possible, but history suggests alternative candidates, if they reach a level of magnitude, often harm the incumbent more than the challenger. That’s because the incumbent (or incumbent party) generally gets the blame for what ails the polity, and alternative candidates serve to emphasize these ills to the electorate.

Thus, Theodore Roosevelt’s 1912 independent bid destroyed the Taft incumbency; George Wallace’s 1968 candidacy (which garnered nearly 14 percent of the popular vote) upended the Democrats’ hold on the White House; John Anderson’s 1980 insurgency (6.6 percent) helped defeat Jimmy Carter; and Ross Perot’s 1992 entry (19 percent) contributed to George H. W. Bush’s downfall. It’s rather pat to suggest definitively that a Schultz candidacy will “give Donald Trump his only serious chance to get reelected,” as William A. Galston put it in a Wall Street Journal open letter. The campaign year dynamics have yet to play out, and they could prove to be far different from what they appear to be today.

Finally, independent presidential bids, even in failure, sometimes can help the country sort out the political complexities of the day. Consider the lingering significance of Ross Perot’s 19 percent of the electorate in 1992. It represented a protest movement spawned primarily by political anxiety over what was considered fiscal recklessness at the federal level. Then, two years later, it coalesced in the midterm elections to deliver a stern rebuke to President Bill Clinton and award full congressional control to the Republican Party for the first time in four decades. Then, just two years after that, it turned around the helped elect Clinton to a second term.

But then exit polls two years later revealed that the Perot vote declined precipitously among independents, Democrats, liberals, and moderates. Meanwhile, Clinton’s vote increased markedly among all those groups, suggesting he had finally captured a goodly share of the Perot vote. He captured it by crafting a center-left brand of politics that resonated with multiple segments of the electorate, including the previous Perot voters. Without those voters, it isn’t likely Clinton could have pulled together his winning coalition.

Something similar happened following the 1968 independent candidacy of Alabama’s George Wallace, who captured nearly 14 percent of the popular balloting and landed electoral vote pluralities in five southern states. Richard Nixon won that year, but the Wallace candidacy rendered him a minority president, with just 43 percent of the vote (the same percentage Clinton received in 1992). But Nixon wooed the angry Wallace constituency through his first term, and by 1972 he had incorporated it into his coalition. He captured those five southern states and also siphoned off a large proportion of the angry white ethnic voters in America’s big cities of the Northeast and Midwest. Ronald Reagan built on that strategy in fashioning his more powerful coalition and transforming the political balance of power in the 1980s.

Thus do we see that independent presidential candidacies can pull together knots of voters that can be incorporated into subsequent political coalitions, including coalitions of significant political clout.

Without making any predictions about Howard Schultz’s ability to do this, or anything else of political significance, in 2020, it does seem axiomatic that the emotions and volatile nature of American politics these days could pose an uncommon political opportunity to a credible independent candidacy. Of course, that opportunity can be exploited only if the independent candidate can craft a collection of policy prescriptions that can galvanize a new and powerful electoral coalition.

Robert W. Merry, longtime Washington journalist and publishing executive, is the former editor of The American Conservative and the National Interest . He is the author most recently of President McKinley: Architect of the American Century.