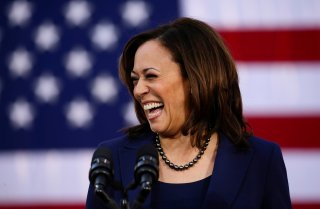 Harris—who was one of Biden’s early rivals in the 2020 presidential run—was elected as the second-ever Black female senator after serving as California’s attorney general for nearly a decade.

As the attorney general from 2011 to 2017, California’s Justice Department became the first state agency to regulate body cameras used by police officers. The decision was pushed under Harris’s leadership as the “top cop” in the state. Harris also launched pattern-or-practice investigations into two different police departments that had blistered reputations due to misconduct and maltreatment.

During her time as attorney general, Harris initiated a training course for police officers that targeted reducing systemic racism within the state’s profession.

The California Democrat also monitored an investigation and later multimillion-dollar settlement against a medical laboratory testing company that overcharged the state’s medical program for the poor and disabled.

Harris’s push for police reform and mending the criminal justice system has placed her center-stage as one of Biden’s top contenders.

She’s sided with Democratic congressional colleagues to advocate for a bill that bans police chokeholds, mandates body cameras and improves police accountability—a legislation drafted following the killing of George Floyd. The former attorney general also was one of the first to call on an investigation into Floyd’s death.

Harris has also taken to the streets to protest racism and policing, including marching with Black Lives Matter in front of the White House.

Harris is perhaps one of the only candidates on Biden’s shortlist that got to know Beau on a deeper level. Beau died of brain cancer in 2015 when he was only forty-six years old.

“Thinking of @JoeBiden, @DrBiden and the entire Biden family today. Beau Biden was my friend. We were AGs together, and you couldn’t find a person who cared more deeply for his family, the nation he served, and the state of Delaware. Four years after his passing, I still miss him,” Harris tweeted on the fourth anniversary of his death.

One of the most recent arguments against Harris’s vice presidency is Dodd’s—who is one of the four members on Biden’s VP selection committee—meeting with the California Democrat after publicly attacking Biden on the debate stage.

Dodd claimed Harris had no “remorse” for criticizing Biden on his position against federally mandated school desegregation bussing in the 1970s, saying the verbal brawl was just “politics.”

“There was a little girl in California who was part of the second class to integrate her public schools and she was bused to school every day,” Harris told Biden on stage. “That little girl was me. So I will tell you that on this subject, it cannot be an intellectual debate among Democrats.”

Despite Biden’s public announcement of burying the hatchet with Harris, Dodd is still skeptical of Harris’s candidacy as vice president.

Some close allies to Biden are balking at supporting Harris as the vice-presidential pick, noting that her ambitions are just to eventually become president. Harris was one of Biden’s early rivals in the 2020 run but abandoned her presidential bid in December.

“She would be running for president the day of the inauguration,” a Florida businessman backing Biden told CNBC.

“I think a good number of people closest to Joe are pushing against Kamala, including me. I don’t like her, and I don’t like the way she campaigned. She seems not loyal at all and very opportunistic,” a Chicago businessman supporting Biden told CNBC.