Does Liz Cheney Actually Want to be Purged by the GOP? 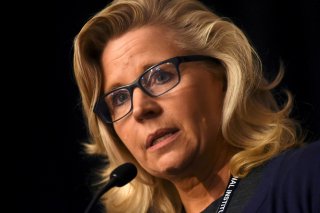 It’s all over but the shoutin’. Liz Cheney, the daughter of Dick, the most powerful member of the George W. Bush administration, is now being defenestrated from her position as House Republican Conference chair by Kevin McCarthy, the House Minority Leader. “I’ve had it with her,” McCarthy apparently declared on a hot mic right before going on Fox a day ago. The “it” was, of course, Cheney’s serial repudiation of Donald Trump’s bogus claim that he actually won the 2020 election. On Monday, Cheney, who was one of ten Republicans to vote for Trump’s impeachment in January, tweeted, “The 2020 presidential election was not stolen. Anyone who claims it was is spreading THE BIG LIE, turning their back on the rule of law, and poisoning our democratic system.”

This tweet was enough to set the cat among the pigeons. Sen. Mitt Romney tweeted on Tuesday, “Every person of conscience draws a line beyond which they will not go: Liz Cheney refuses to lie.” But Trump has himself seized upon Cheney’s insubordination to demonstrate his continued sway in the GOP. Never one for understatement, Trump lashed into her in a statement on Tuesday along with swipes at Senate Majority Leader Mitch McConnell—”gutless and clueless”—and former vice president Mike Pence. “Warmonger Liz Cheney, who has virtually no support left in the Great State of Wyoming, continues to unknowingly and foolishly say that there was no Election Fraud in the 2020 Presidential Election when in fact, the evidence, including no Legislative approvals as demanded by the U.S. Constitution, shows the exact opposite,” Trump said.

Aram Bakshian Jr., a former speechwriter for Richard M. Nixon and Ronald Reagan, observes that it's unlikely that the brouhaha "matters a great deal, one way or the other. The general public is blissfully unaware of the fact that there is such a thing as the House Republican Conference, and could care less who heads it." Still, he cautions that “minority parties that have lost both houses of the legislature and the White House can’t afford to waste time on purges and circular firing squads. The future of the Republican party doesn’t hinge on Donald Trump, one way or the other. Slowly but surely, he is becoming a loud but shrinking figure in the rearview mirror of American politics.” Similarly, the Wall Street Journal editorial page is warning that this schism could damage the GOP: “This should be a hopeful moment for House Republicans. While they’re playing defense in the minority for now, their prospects for picking up the five net seats they need to regain the majority in 2022 are excellent. That is, unless they devolve into internal brawling over the 2020 election.”

But they’ve already devolved into a brawl. Both Trump and McCarthy are reportedly pushing for Rep. Elise Stefanik, who has morphed from moderate Republican to Trump supporter, to replace Cheney. McCarthy is being accused by the remnant NeverTrump faction of engaging in McCarthyism. But cold calculation, at a moment when the Trump base can help sweep the GOP back into the majority, or so the thinking goes, is prompting McCarthy to oust Cheney from her No. 3 post in the Republican leadership. In short, it looks like a slam dunk for Stefanik. Enthusiasm for her is high on the Right. Curt Mills of the American Conservative calls Stefanik “the AOC of the GOP. She’ll be the rock star. She’s a millennial, enjoys access to the New York media market, and is whip smart.”

Stefanik is benefitting from Cheney’s heresies. But it’s also possible that her excommunication is the best thing ever to happen to Cheney. Rather than try to retain her position, she’s been deliberately courting a fight with McCarthy and Co. in order to transform herself into a martyr for the true Republican faith. Her exit strategy is exiting as noisily as possible. “It’s like she’s trying to be an agitator,” one GOP lawmaker told Politico. “It’s like she’s trying to stoke the fire to precipitate her downfall.” Indeed, she is.

For one thing, she has achieved a kind of rehabilitation in the mainstream media. Her father was not known for niceties about democracy during his tenure as vice president when he engineered a war with Iraq and supported the use of “enhanced interrogation,” or, to put it less politely, torture. Liz Cheney supported his robust view of presidential power in foreign affairs. Now her star has dimmed in the GOP. But it is rising elsewhere. Her media presence, at least for the next two years, will be bigger than ever. “Liz Cheney chooses truth over power,” reads a CNN headline. Should the GOP’s electoral fortunes wane between now and November 2022, she would be well-positioned to condemn it for having lashed itself to Trump.

For now, however, Trump, and Trump alone, represents what the GOP leadership views as its best route back to power. The message has never been clearer. Trump may be in exile in Mar-a-Lago, but his hold on the GOP itself has never been tighter.