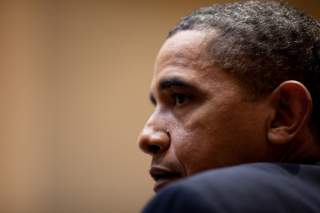 It is unfortunate for Derek Chollet that the infamous David Samuels interview with Deputy National Security Advisor Ben Rhodes has rapidly emerged as the definitive summary of the foreign-policy approach of the Obama administration, with, as Peter Apps of Reuters noted, its focus on the insularity and inexperience of the president’s inner circle, as well as its supposed reliance on spin substituting for policy achievement. It is to be hoped that with the release of his magisterial recapitulation of Barack Obama’s approach to U.S. national security and America’s place in the global order—The Long Game: How Obama Defied Washington and Redefined America’s Role in the World—Chollet, who helped to formulate and execute the foreign-affairs policies of the United States, will be able to shift the conversation back towards the actual record of events.

As outside observers of the administration’s efforts from our perch in the National Security Affairs department of the Naval War College, we note that Nikolas Gvosdev’s assessment of the Obama approach as one of “strategic patience” is confirmed by an insider—one who served as principal deputy director of the Policy Planning Staff at the State Department, as the senior director on the National Security Council for strategic planning, and as assistant secretary of defense for international security affairs. Chollet terms the Obama approach as the “long game”—an effort to renew and sustain American power in the world for the foreseeable future, rather than have it be frittered away chasing ephemeral and, in many cases, unrealizable short-term objectives.

The “long game” is based on eight pillars: balance (not overprioritizing any one region or any one instrument of national power); precision; sustainability; restraint; patience (all four of which emphasize achieving acceptable, discrete outcomes rather than holding out for maximalist objectives); fallibility (understanding that the United States is neither omniscient nor omnipotent); skepticism (a willingness not to be tied to old orthodoxies); and exceptionalism—that the United States, alone among the great powers, has the will, capability and vision to support a global order that enhances the security, freedom and prosperity not only of Americans but of the entire world. It is based on an assessment that the United States is more likely to make progress via incremental change—and that some problems cannot be solved, only contained and mitigated. In addition, the “long game” is characterized by a focus on end states, not on the day-to-day vicissitudes of the twenty-four-hour media cycle, and by a flexibility to try different approaches and even to take gambles in an effort to reach these desired outcomes.

Peggy Noonan once famously remarked that books by Washington insiders are either intended to validate the author’s place and position in the annals of the administration or to cast blame for mistakes on others. Chollet’s book breaks with that standard. There is a willingness to acknowledge the missteps and setbacks of the administration—that there could be a gap between speeches and actual policy outcomes, that a cautious long-game approach might miss opportunities, that the national security process did not seem to work as well as it was intended. There is a frank discussion of the events surrounding the “red line” over Syria and the decision to ultimately eschew force in favor of a Russian-brokered diplomatic solution to the question of the regime’s chemical weapons. Moreover, Chollet inserts a first-person perspective only when it strengthens the overall narrative of events. Ultimately, this is not a personal memoir of what Derek Chollet did during the Obama administration, or an effort to litigate his role in it, but rather to establish, define and defend the overall foreign policy legacy of the Obama administration.

Chollet realizes that he must do this amidst a U.S. foreign policy community that, for the most part, whether Republican or Democrat, does not want to really admit that the unipolar moment of the post–Cold War era is over, and that has also been skeptical of Obama's stewardship of national security affairs. The United States has less ability to compel others to accept its bidding, because other powers have risen or resurged, and because the United States has less to spend. Direct confrontation and an unwillingness to compromise may sound like projecting strength, but are less effective in actually achieving beneficial results. In contrast, a U.S. response that focuses on holding the line—whether in terms of Ukraine, the South China Sea or Iranian nuclear capabilities— rather than on forcing an immediate reversal creates conditions where negative short-term outcomes can be mitigated and the United States can wait to let the long-term unfavorable prospects of the Iranian theocracy, the Vladimir Putin regime or the Chinese Communist oligarchy play themselves out, without having to drain American power to artificially accelerate the process (or even risk inadvertently reversing it). This puts the administration at odds with much of the foreign-policy community, which identifies resolve and resoluteness with immediate action, usually with a strong military component, and sees strategic patience as a sign of weakness and indecision.

Chollet has laid out a clear and compelling picture, and his text is positioned to become one of the definitive summaries of the Obama approach. With that said, his narrative raises a number of questions over the utility of the long-game approach, which we pose here.

The first is that while the long game, in theory, calls for rebalancing the American approach from short-term military action in favor of using other instruments of national power over a longer term, the actual record is somewhat more mixed. As John Cloud observes, the United States, in dealing with the Ukraine crisis, has tremendous economic advantages that Russia cannot match and which, for the most part, it has not deployed, still largely conceiving of its response to events through a hard security lens. Countries in Asia hear the rhetoric of the pivot, but its main manifestation has still been the increased deployments of the U.S. Navy, with the fate of the Trans-Pacific Partnership not yet resolved and no clarity as to whether the administration has the political capital to push it across the congressional finish line. And at the same time, countries in Europe and the Middle East have misinterpreted the rhetoric, leading them to question U.S. resolve.

The United States made calculations that European allies would have to do more in Europe, and accordingly withdrew forces as part of the rebalance—but with many European states still failing to truly rebuild their defensive capabilities, it again falls on the United States to redeploy additional personnel and equipment to Europe. In the Middle East, extensive training efforts have not produced local forces capable of dealing with the various threats that beset the region—and governments still expect that the American cavalry will still ride in to save the day. Chollet himself worries, “A core pillar of Obama’s Long Game strategy toward the vast swath of crises stretching from Mali to Afghanistan has been to create capable partners to help do the work with us, to expand our reach without stretching us too thin. . . . Yet . . . there is good reason to be skeptical this will work.”

What then? How to reconcile a long-game assessment that may counsel the United States to write off a security effort with the short-run political consequences? And is security cooperation our only tool? Chollet repeatedly discusses the need to look for nonmilitary tools, but then reverts to a “military-only” approach when discussing cases.

This raises the question of the sustainability of a long-game approach when people are caught up in the day-to-day rush of events, while political pressure and the media call for something to be done as CNN broadcasts crowds chanting slogans of freedom in public squares. With the hindsight of 2016, Ukraine and Libya would both be much better off today if it were possible to sustain a long-game approach based on short-term restraint and compromise. President George H. W. Bush faced a great deal of criticism for not overthrowing Saddam Hussein in 1991 and for accepting a half-a-loaf solution that left the Kurdish areas of the north enjoying de facto autonomy as a safe haven. Yet today it is those Kurdish areas—where years of assistance and capacity-building efforts have allowed the most effective regional administration in the area to emerge from the wreckage of Iraq—that serve as the linchpin of the U.S. effort against Islamic State.

An intervention in Libya in 2011 to create a Kurdish-style safe haven in Benghazi, and a negotiated settlement that did not have as its nonnegotiable demand the immediate departure of Muammar el-Qaddafi, might have been the better long-game approach for continuing to uphold a fragile UN Security Council consensus on humanitarian intervention while preventing the complete collapse of the Libyan state. Under such conditions, there would have been no long-term viability for the Qaddafi regime, which would have either evolved or disintegrated under the weight of its own internal contradictions, while giving time to build capacity for an eventual transition. (It may have also induced the opposition in Syria to similarly scale back its demands, rather than expecting that they too would soon be the beneficiaries of a U.S.-led air campaign against the Assad regime.)