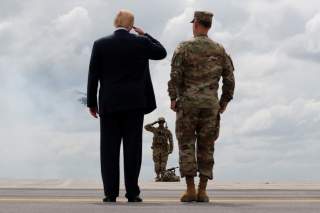 NEAR THE end of Trump and His Generals: The Cost of Chaos, a blistering four-hundred-page attack on the Trump administration’s foreign policy written by Peter Bergen, the CNN analyst affiliated with New America, an avowedly centrist think tank, the author devotes two pages to an event missing from all timelines of the major international events of the last three years: a party thrown in September by Kathleen and David Bradley to celebrate the publication of Call Sign Chaos: Learning to Lead, the memoir by President Donald Trump’s former defense secretary, retired General James N. Mattis.

Who was there? Tout le monde! Andrea Mitchell, Bob Woodward, Sally Quinn, Susan Glasser—even John Kelly, like Mattis, a retired general hired and quickly fired by Trump. “This was no MAGA rally,” Bergen quips, but rather a gathering of “the great and the good.”

In a vast neo-Georgian house a stone’s throw from the British embassy, the courtly Bradley and his elegant wife, Katherine, presided over dinners and parties for the great and the good. Heads of state, foreign ministers, four-star generals, senators, leading TV news anchors and the occasional CIA director all enjoyed the Bradleys’ generous hospitality, including delicious butler-served meals under the warm light of candle-lit chandeliers.

I’ve attended a couple of those gatherings. I’ve also met Bergen and found him, as advertised, charming and erudite; as is well known, he produced the first TV interview, in 1997, with Osama bin-Laden. About a decade ago, Bergen and I commiserated over the opportunity lost when the moderator of a small, private dinner with Mideast dissidents, held at a members-only club in Washington, became inebriated and rambled, leaving our Arab guests little opportunity to discuss the human rights issues they had hoped to spotlight. With five previous books to his credit, including three New York Times bestsellers and four Washington Post non-fiction books of the year, Bergen unquestionably ranks among the best-credentialed, and most highly regarded, members of the foreign policy establishment. Indeed, many of the same bold-faced names from the Mattis party turned out for Bergen’s own book launch in January.

So it comes as a genuine surprise, and a disappointment, that in Trump and His Generals the author repeatedly employs language beneath a figure of his stature. Some formulations are simply infelicitous, as when Bergen refers to the day Trump “was installed as” president; or when he writes that General Mike Flynn, prior to his embroilment in the Russia probe, “was a genuine war hero, with the blood of the Afghan and Iraq Wars on his hands.” It is not to the heroes of armed conflict that society ascribes bloody hands.

In other cases, while lamenting the “cavalier” attitude of the president towards national security and the crudity of his language in meetings with senior staff, Bergen adopts a tone far too casual for a work of serious contemporary scholarship worthy of the crème de la crème of the foreign policy establishment. “Jared Kushner,” we hear, “shoved a shiv in [Chris] Christie’s back … Welcome to Jersey!” John Bolton is introduced as “a ferocious bureaucratic infighter who had worked in the Washington swamp since the era when Olivia Newton-John’s ‘Physical’ was America’s number one song.” State Department officials “freaked out” over an Afghan official’s comments, while a statement from Kushner’s attorney is deemed “baloney, served with generous helpings of bunkum and balderdash.” Condemning Trump for accepting too readily Vladimir Putin’s denials of complicity in election-meddling, Bergen abandons reporting for retorting: “Well, that’s settled then!”

Yet the most surprising defacement of the Bergen standard is the most gratuitous: the author’s frequent resort to scatology and outright profanity, not just in quotation but in passages of omniscient authorial voice. It does not enhance Bergen’s case when he writes that Trump “bitched and moaned” after his travel ban was revised, that he was “pissed off” about his options in Afghanistan, or that Mattis held as one of the imperatives of working for this commander-in-chief “not pissing him off” (a working condition hardly unique to Trump aides).

And on it goes: an entire chapter carries the title “PISSING OFF ALLIES, EMBRACING PUTIN.” President Lyndon B. Johnson issued orders “while taking a crap” in White House restrooms; the chief function that retired Army Lt. Gen. Keith Kellogg served for the president was “shooting the shit with him”; and large numbers of Americans oppose the mission in Afghanistan because they believe “it’s always going to be a shithole.”

It gets worse. Attending the United Nations General Assembly, an annual ritual of presidential diplomacy, represented a potential minefield for Trump because he only had to “make one fuckup” for the media to declare the trip a failure. The worst is reserved for Secretary of State Mike Pompeo, formerly CIA director and the longest-serving member of Trump’s national security team. Mostly, Bergen curiously ignores Pompeo, affording him none of the portraiture or anecdotal attention lavished on heavyweight colleagues, such as Generals Mattis and Kelly, Lt. Gen. H.R. McMaster, or even Steve Bannon. The marginalization of Pompeo, and the extraordinary vitriol directed at him when his name does come up, paradoxically marks him as a figure of singular importance to the author. Indeed, the first extended reference comes three-quarters into the text: “Agency officials were pleasantly surprised that CIA director Mike Pompeo – who personally could be ‘a dick’ when he dealt with them – had never tried to downplay or politicize the intelligence about Russia.”

It is difficult to imagine the suave and cultivated Peter Bergen using such language in his segments on CNN or while holding forth in the Bradleys’ drawing room. Why the author considers the attendees of those parties more deserving of his manners and erudition than the readers of this book—hard-working citizens willing to fork over thirty dollars for the hardcover edition—is a mystery. But it might illuminate the polling data the author cites to explain Donald Trump’s rise, summarized by Bergen as “the widespread sentiment among ordinary Americans that the elites in both political parties had failed to deliver for them.”

THE INCLUSION of the attack on Pompeo as a manager at the CIA—the quotation of a single anonymous source averring that some unspecified number of anonymous officials at Langley thought the director occasionally acted like “a dick”—warrants our attention not solely for its vulgarity but for what it says about the author’s aims and methodology. Putting aside the near-total absence of other information provided about Pompeo, such as his graduation from West Point or his management of the State Department, what are we to conclude from this nugget? That Pompeo was so personally unpleasant as to be unfit to run the CIA? The author does not aim that high, as he nowhere asserts that animosity towards Pompeo was the consensus view at Langley; nor is any effort made, for the sake of serious scholarship or some semblance of balance, to report the secretary’s perspective, or that of his supporters at CIA. It is, rather, a drive-by attack, employing the harshest of street profanities, a moment that tells us far more about Peter Bergen than about Mike Pompeo.

Presumably, the offending quote came from the one hundred interviews the author conducted with current and former Trump aides. As with the works of Bob Woodward, another mandarin of the Washington establishment who produces gossipy palace-intrigue chronicles of the presidency in real-time, it is seldom difficult to discern who served as a source. In a prefatory note, Bergen discloses that all quotations are based on “at least one person’s account of a meeting or event,” with some based on multiple accounts of the same session. Since Trump is not cited as an interviewee, it follows that for every quote attributed to him in conversation with a single other person, the source was the participant not named Trump.

As with the Woodward canon, the likely cooperation of certain characters in the story is also telegraphed by the kid-gloves treatment they receive in it. Praised for his thoughtfulness and reading habits, Mattis fits this category, as do the others Bergen lists as members of the “axis of adults.” These are the accomplished ex-aides who, in their accounting, struggled to keep the reckless Trump from harming himself and the country and who, having failed at the task, now whisper harsh comments about him to like-minded journalists: John Kelly, Rex Tillerson, and Gary Cohn.

The archetypal background source in these pages, however, is likely McMaster, the learned lieutenant general who served as Trump’s national security adviser from February 2017 to April 2018, and who draws Bergen’s most glowing commendations. A span of one hundred pages sees McMaster described as “arguably the most capable military officer of his generation,” “a man of boundless energy who didn’t so much enter a room as bound into it,” a “charming, funny, and well liked” figure who “exuded a contagious confidence” and “the coiled energy of a boxer,” a technocrat who “quickly moved to make Trump’s National Security Council a more professional institution,” “beloved” by the NSC staff when the president fired him.