Does Trump Have a Middle East Grand Strategy? 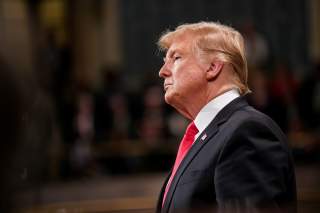 Donald Trump slowly but steadily continues to implement his foreign-policy doctrine—a clash with rival China, the deterrence and dissolution of a hostile Iran, and the containment of loud Russia. And these are not three separate goals. Trump’s grand strategy means that one bullet, which was already aimed at Tehran, automatically strikes two other problems. It’s like a “Domino principle”—the destabilization of а single country leads to serious problems for the other ones.

For example, these problems will arise if China loses substantial amounts of cheap oil shipments from Iran. Beijing will have to look for other suppliers and buy oil from them for market price. It’ll decrease the competitive advantages of Chinese goods on the international markets. That’s why in January 2019 China decided, despite American sanctions, to invest three billion dollars in Iranian oil industry.

Trump was also pleased by the possibility that EU cannot count any more on possible Iranian gas supplies and will have to agree to buy more expensive gas from America. In addition, Israel plans to supply thirty billion cubic meters of natural gas to the EU by 2025—and this project is a natural competitor to the Turkish stream. This is an important point for the EU because almost no European leader would like to see Turkey as a big gas hub. There is a huge risk that Prime Minister Recep Erdogan will follow the Ukrainian example and use his transit position for political purposes.

When it comes to Russia, the destabilization of Iran will upend the situation in the Southern Caucuses and Caspian countries. The United States, which is annulling the INF Treaty, might seek to deploy new American intermediate and short range rockets in those countries. For instance, Georgia could “invite” U.S. troops to defend its border with a turbulent Iran.

The truth is that on the verge of new U.S. presidential campaign and in the midst of American political fervor, Trump needs to score a military victory. And the trophies of this war could offer a solution to key American problems.

The announced withdrawal of American troops from Syria is an important element of the U.S. anti-Iranian strategy. According to Washington’s logic, it isn’t America but regional players (Israel and Saudi Arabia) that must push Iran out of Syria. At the same time, Tel Aviv and Riyadh are ready to carry out this mission—and not for the sake of Washington but for their own reasons. Israel needs to “bleed out” Hezbollah and secure its borders from pro-Iranian factions. It also hopes to prevent the creation of a territorial corridor from Iran to Lebanon—the so-called “Shia crescent.” Saudi Arabia has the same aspiration.

In addition to political and ideological reasons for stopping the Shiites, Saudi Arabia also has an economic interest—Syria should not be revived within the borders of 2011 and shouldn’t become a transit country for Iranian oil and gas. Indeed, Riyadh conducted fruitful work to prevent the creations of a “Shia Arc”—pro-Saudi forces are gaining more and more weight in Lebanon.

After announcing the Syria pullout, Trump began to strengthen the old footholds against Iran, and to create new ones. For example, Secretary of State Michael Pompeo visited Qatar and agreed to increase the number of troops at the local American military base. Also, Washington plans to send five thousand soldiers to Iraq.

In fact, Trump wants to encircle Iran and destabilize it. There were protests in Iran after the resurrection of U.S. sanctions. They started with the objections against rising prices and ended with anti-government slogans. Even the president of Iran, Hassan Rouhani, had to admit that the country is in a virtual state of economic collapse.

Trump recently declared that the American troops will leave Afghanistan only if there are no remaining ISIS militants and if Kabul and the Taliban reach a peace agreement. In fact, Trump is looking for an opportunity not to withdraw the military from Afghanistan. On the contrary, he wishes to increase their number. That’s why he really needs an agreement between Kabul and the Taliban—he thinks that both parties will jointly ask for America help to fight against ISIS.

But how to bring them to the negotiating table, especially given that both parties do not want to proceed with these negotiations?

The government of Afghanistan is the lesser part of this problem. President Ashraf Ghani is a pro-American politician and requires Washington’s support. But the Taliban must be persuaded to reach a peace deal. And the liberation of ISIS militants from a Taliban prison, made by U.S. forces, sent a clear signal: “either you are with us, or you are alone against ISIS—and you cannot win that fight, as you couldn’t win in the 2016.”

Trump will likely demand that the Taliban nullify their deal with Iran in which Tehran helps them with weapons and ammunition, and the Taliban keeps ISIS away from the Iranian border. And eventually Americans by the invitation of Taliban will be fighting ISIS and pressing its militants not from but toward the Iranian border. And the Taliban will stay aside, doing nothing to prevent this scenario. This scenario would mean that the risk of terrorist attacks inside the country would increase, similar to the attack in September 2018 in Ahvaz.

Then there is Iraq. The Iraqi government is talking about the possibility of breaking the security agreement with the United States and is threatening to send all foreign-military personnel away from its territory. This was Iraqi’s response to Trump’s public statement that one of the goals of maintaining the U.S. military presence in Iraq is to keep an eye on Iran.

At the same time, Baghdad wants to use its strategic position to start what amounts to a public auction for its loyalty. Russia and Iran are interested in expelling Americans from Iraq and are each ready to make their bids. During the recent meeting between the foreign ministers of Russia and Iraq, Sergey Lavrov stressed that Moscow expects the United States to strictly comply with its mandate in Iraq. Americans have a different point of view. For example, the United States plans to build two more military bases on the territory of Iraq—about one hundred kilometers away from the border with Syria.

But Trump will not take part in this auction. Now, after the ultimatum, he’s likely to act in his own way—employing pressure and blackmail. And he’ll use the Baghdad’s weak spot—Iraqi Kurdistan. Recently, the prime minister of this autonomy Nechirvan Barzani said that U.S. troops must remain on the territory of Iraqi Kurdistan. His motives are clear—currently he has a mutually beneficial cooperation with Trump. It includes not only the pressure on Baghdad—U.S. president wants to use Barzani’s position on the PKK issue to restore the relations between Washington and Ankara. Trump needs Turkey as part of his strategy to confront Iran. And Barzani, playing the role of a mediator, can significantly increase the political weight of his clan. It is no coincidence that the Syrian opposition asked Massoud Barzani, the former president of Iraqi Kurdistan and the uncle of Nechirvan Barzani, to help in resolving the Syrian crisis.

Trump is on the verge of implementing his “grand strategy.” He came, he saw, and now he must conquer. Of course, the retaliatory steps of Moscow, Tehran and Beijing will come, and the American president will have to react. The reaction can be different—formal recognition of Bashar al-Assad as the winner in the civil war, a public handshake with him and the offer of cooperation plus financial assistance. If Russia does not find a way out, then perhaps a grand war could start. The countdown is beginning.