Don’t Buy Hype Out of the Military-Industrial Complex 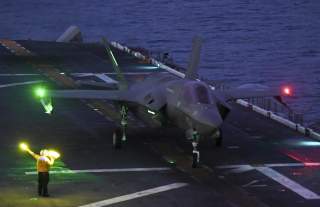 Beware of minor word choices when interacting with representatives of the military-industrial complex. Syntax can shape or misshape deliberations about strategy, force design, or budgeteering. Something as simple as speaking about some potential future capability or widget in the present tense can mislead. Such phrasing implies that the capability or widget already exists, that engineers have vetted the technology under real-world circumstances, and that acquiring it involves little risk. The upshot: it constitutes a worthy investment of taxpayer dollars. QED.

Portraying future as present capability is a common tactic in defense circles. Case in point: over at the War Zone, the redoubtable Tyler Rogoway and Joseph Trevithick report on an effort by defense manufacturer General Atomics to field the “Defender,” an unmanned escort fighter aircraft meant to ward off attacks against U.S. Air Force tanker aircraft. I don’t mean to pick on General Atomics in particular. Its salesmanship is neither unusual nor especially egregious. It simply fits into and illustrates a pattern.

Proclaimed a wretchedly written tweet from the company’s Aerospace Systems division: “Capable of protecting the @USAF’s high value airborne assets (HVAA) in a contested environment makes the Defender a critical piece of the Future Force.” The concept art accompanying the tweet is reminiscent of classic sci-fi. It shows a pilotless warplane soaring through the wild blue, bearing four air-to-air missiles on wing pylons while firing another from an internal bay. A tanker cruises safely in the background. The keywords in the tweet are capable and makes. Both imply this “loyal wingman” is a going concern now. Critical prods Congress and U.S. Air Force officialdom to buy now, lest American tankers remain naked against assault from marauding Chinese or Russian fighters.

That would be tantamount to strategic malpractice.

The idea impelling the Defender project is not the problem. In fact, the idea is unassailable. Strategy is about concentrating superior military might at the decisive place at the decisive time to overpower hostile forces. Prospective foes understand that the U.S. armed forces must surmount the tyranny of distance just to reach any meaningful battleground, chiefly around the Eurasian maritime periphery. They understand that the U.S. Air Force and Navy depend on impressive but short-range aircraft to win command of the air and project power ashore. To name two, F-35 joint strike fighters and F/A-18 Hornets need to fight across distances of a thousand miles or more to make their weight felt in aerial combat. But they can fly only about half that distance without refueling. U.S. aviators cannot win unless they arrive on scene, and they can’t arrive on scene without extra fuel.

Tanking assets, in other words, are at an absolute premium in combat remote from North America. They’re also vulnerable to opponents who realize they could strike at U.S. logistics and skip a battle they might lose against heavily armed U.S. squadrons. Shoot down the tanker fleet and the rest of the aerial armada soon goes away. Going after American logistics is sound tactics. Lumbering U.S. Air Force tankers such as the KC-135R and KC-46A make easy pickings for hostile fighters. They’re ill-equipped to beat back attacks without help from U.S. or allied warplanes. Assigning traditional piloted fighters to ride shotgun helps, but sentry duty siphons assets from frontline aerial forces. Protecting logistics assets thus drains combat power from scenes of action where superior firepower matters most. Loyal wingmen like the Defender would relax the demand on frontline aircraft and boost chances of victory in the sky.

So, again, the logic for building swarms of inexpensive unpiloted aircraft to take the place of manned escorts appears impeccable. The problem is that not every great idea works out when reduced to engineering and put to the test. The sales pitch masks this reality, encouraging customers to act long before they have full information. It’s open to question whether the state of technology lets aviation firms put the idea underlying loyal wingmen into practice. An idea that’s not actionable is a wish—and a wish is not a strategy. Not a good one, anyway.

Here’s an everyday analogy. Astute car buyers know a wary attitude toward sales hype is best. Like spokesmen for defense firms, car salesmen invariably speak in the present tense. They inform you what capabilities you can purchase for X dollars and try to convince you to want these capabilities enough to pay for them. But there’s a difference. While bestriding the car lot, it’s safe to assume that Toyota or Ford specialists drew up a concept; built a prototype; put the prototype through extreme testing on the road and track; and tweaked the design based on the test results in order to ameliorate lingering flaws. Only then did management order the vehicle into mass production. Furthermore, shoppers rest assured that reputable builders make incremental upgrades each model year as feedback comes in. It’s reasonably safe to bet on the quality of that car sitting on the lot.

Automotive companies, in other words, aren’t marketing an abstract idea. They’re marketing an idea that engineers have bent into steel, subjected to field trials under realistic operating conditions, and revised to preserve its best features while correcting or offsetting shortcomings. No sane manufacturer puts a concept car into production—let alone expects motorists to buy it—without road testing and refinement. A firm that skips field trials soon finds itself out of business.

Like shoppers prowling the local dealership, lawmakers and military folk should cultivate a skeptical attitude toward hype. Hype tries to bypass skepticism and doubt, the core of scientific inquiry. Inaccurate language encourages customers—customers being the armed services and Congress—to set aside doubt, and thus to overlook the vetting process for some idea before them. That would be a grave error. Scientific Method 101 teaches that hypotheses have to be tested through experimentation. Experiments are central to scientific-technical enterprises. Dreaming up a hypothesis about a weapon system represents just the first step toward handing a proven capability to the fighting forces. Intellectual work is necessary but far from sufficient.

Take it from Nobel-winning physicist Richard Feynman. Feynman warns scientists that they can conceive of the most beautiful idea in the world. But, he adds, if experiments contradict the hypothesis, “it’s wrong.” Fail.

So it’s best to think of any item that hasn’t yet been built or put to the test—whether it’s an unmanned escort plane, a ship, or a missile—as a hypothesis. A hypothesis might fulfill the promises its designers make; it might fulfill their promises in part; it might fail altogether. Prospective funders, then, should double as inquisitors, asking tough questions about potential obstacles, delays, and failures. Skeptical consumers should read General Atomics’ tweet more like this: “If it proves capable of protecting the @USAF’s high value airborne assets (HVAA) in a contested environment, the Defender could become a critical piece of the Future Force.”

Interpreting sales pitches warily restores skepticism and doubt to their proper place in force design. It helps decisionmakers decide whether some new weapon or platform is a good bet. Or not.

Where does this propensity to promise too much, too soon, come from? It’s traceable in part to a culture of success. A can-do spirit manifests itself among defense firms and uniformed military services alike. Such a culture can spawn unduly upbeat attitudes toward could-be capabilities and hardware. Commercial motives play a part among vendors, moreover. Firms need government contracts to stay in business and turn a profit. Touting their wares is a must. The nature of business tempts spokesmen to oversell.

And, last but not least, sloppy wordsmithing is at fault. That’s on managers as well as drafters. Combine a relentlessly buoyant culture with material self-interest with dashed-off writing, and you have a formula for communications that obscure potentially unpleasant realities. Decisionmakers must insist on clarity.

To be fair, the problem isn’t confined to General Atomics or the U.S. Air Force. The U.S. Navy has endured more than its share of woes over the years. Short-circuiting the process of building a little, testing a little, and learning a lot is what gave us the littoral combat ship, the next-generation aircraft carrier USS Ford, and the stealth destroyer USS Zumwalt. In each case uniformed military folk, their civilian masters, and defense manufacturers formulated golly-gee concepts that hinged on combining untried technologies in large numbers. Naval overseers ordered these nautical equivalents of a concept car into serial production.

The results were foreseeable. In each case the product disappointed, and at frightful cost. Shipbuilders have been forced to retrofit fixes into each program with uncertain prospects of success. Healthy skepticism goes a long way toward forestalling such debacles. Maybe that’s the grand lesson for builders and buyers of military equipment: you will experiment. You can experiment with new kit ahead of time in a planned, orderly manner, using prototypes to unearth and solve problems before you commit to mass production. Or you can flout the scientific method and experiment after the new kit is in the hands of aviators, sailors, or soldiers. Don’t be surprised at the repercussions of the haphazard approach.