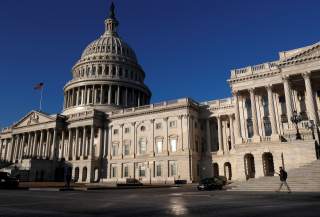 There’s hardly a person in America today that’s not disgusted with the state of politics in Washington. People are largely fed up with the whole system: the administration, Congress, Democrats, Republicans and their collective inability to work together to get anything meaningful done for the country. If you were pinning your hopes on the 2018 ‘blue wave’ making things better in 2019, you’re likely to be sorely disappointed.

Without change coming from outside the establishment, status-quo system, the deterioration that led to so much angst during the last election will continue (and may get worse).

Voters went to the polls in record numbers earlier this month, motivated by a desire to shake things up to see positive change. What they’re about to find out, unfortunately, is that switching the House from GOP to Democrat control is not going to make Republicans rethink their priorities and cause them to be more focused on the needs of people. Nor will Democrats be more inclined to heal the divisions for the benefit of the general population once they take control next January.

Based on the last few decades of experience, we are most likely going to see the GOP trying to undercut the Democrats in the House while the Dems seek ways to make the Republican president appear ineffective. Each will work to gain an advantage at the expense of the other ahead of the 2020 election; neither is likely to be much concerned with seeking the good of the people.

Need evidence? Obama’s signature achievement during his eight years in power was the Affordable Care Act, which was shoved through Congress with little to no genuine consideration of Republican input and was passed without a single GOP vote. Last year the GOP House passed a new tax plan with no real consideration of Democratic preferences, and passed it without a single Dem ‘yea.’

A record number of people voted in the 2018 midterms because they want to see positive change for the country. What they are almost certain to discover, however, is that the dysfunction—which drove them to the polls in such large numbers—will get worse.

Once the new Congress is convened, the Democrats will likely launch a flurry of fishing expeditions (investigations) into President Donald Trump doing everything in their power to discredit him before the voting public so they can win the White House in 2020. Trump can be counted on to continue playing to the worst instincts of some on the right, using his office to demean and discredit his opponents and keeping the electorate divided. House Republicans will be uncooperative and try to paint the Democrats as unable to govern in hopes of producing a ‘red wave’ in 2020.

It’s far from certain at this early stage which of these constituencies will win, but identifying the biggest loser is easy and clear: the American people.

The vast majority of Americans want the political parties to make necessary compromises to get things done for the country. A CNN poll found last year that 72 percent of Americans wanted the president to work with the Democrats to get things done and 69 percent wanted the Democrats to compromise with the president rather than always fight against him.

A new study released earlier this month reinforced those results and found that 67 percent of Americans in a category called the “exhausted majority” were sick of the state of politics in America today. On the positive side, however, the poll found more than 75 percent believed our differences aren’t so great that we can’t work together.

Americans’ displeasure in our deteriorating political system is growing, and if the two parties don’t want to lose their century-long monopoly on power, they are going to have to start making changes quickly.

But I project they won’t. Because I don’t believe they can make changes at this point.

As neither party is a monolithic entity, they are both subject to the views of the more impassioned activists who press for hardline positions. The result is that those in their respective parties that may want to compromise on a given matter are opposed from within and pressured to hold to the party line irrespective of what they think is right.

The Pew Research Center published a report in which they analyzed every roll call vote from every congress from 1789 through June 2014 and quantified both the amount of meaningful legislation each Congress passed and how many members voted between the ideological extremes of each party.

As late as 1974, 240 members of the House “scored in between the most conservative Democrat (John Rarick of Louisiana) and the most liberal Republican (Charles Whalen of Ohio).” 29 senators likewise fell between the extremes.

Up until this time, compromise in Congress was a normal, necessary skill in getting things done for the American people. But by 2010–11, the report sadly notes, the spirit of bipartisanship cooperation had all but vanished and “there was no overlap at all in either chamber.”

This no-compromise spirit remains fully engaged and Congress—quite irrespective of whether the Republicans or Democrats have the upper hand—and will remain a hapless entity until the voters finally get genuinely fed up and take matters into their own voting hands. It’s going to take more than just alternating between red and blue waves. It's going to take something like a ‘purple’ wave where both parties are dealt a loss of seats.

Whether those seats are lost to a new national party or a host of independent candidates, doesn’t much matter. What does matter—a lot—is that nothing short of a visible electoral loss to both parties will change this dysfunctional dynamic.

Yeah, I get it; third parties have not succeeded in over a century and independents rarely win. What I’m suggesting is hard. But if we don’t find a way to make a new electoral wave hit the beach, the divisions in Washington will continue until our politics aren’t just dysfunctional, they’ll become outright disabled.

Daniel L. Davis is a retired Army Lt. Col. with four combat deployments, having been awarded a Bronze Star Medal for Valor in Desert Storm and a Bronze Star for service in Afghanistan in 2011. The views expressed in this article are Davis’ alone and do not represent the views of any organization.