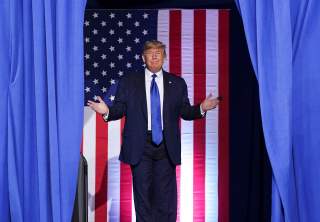 Donald Trump ran for president claiming that he wanted to end foreign policy interventionism and nation-building. He described the Iraq War a terrible mistake. Thus, he incurred the great displeasure of the U.S. foreign policy and national security establishment, suffering the wrath of its most hawkish wing, the neoconservative network. During the election campaign, many of its members signed an ad in the New York Times declaring Trump's anathema. Their hostility only deepened as he continued speaking of the lives and money spent in the Middle East as a complete waste.

But hawks have recently developed a new appreciation for the president because his actions have contradicted his previously stated goals. Coming on top of a series of foreign policy and national security appointments that have had the same trajectory, the assassination of Iran’s Maj. Gen. Qassim Suleimani gave hawks real hope that at least in practice Trump was not insisting on his earlier foreign policy views.

The culmination of the president’s paradoxical, seemingly self-defeating appointments was the selection of John Bolton as national security advisor and Michael Pompeo as secretary of state. Of his political alliances none could be more paradoxical than that with Senate super-hawks and interventionists Lindsey Graham and Tom Cotton. These are, after all, favorites of the president’s most stalwart neoconservative enemies, as is Vice President Mike Pence and his national security staff.

If the president genuinely believes what he has so often said about “America First” and interventionism, then his repeatedly appointing advisors who do not share his basic predilections requires an explanation. Three years into his presidency it seems insufficient to point to the president’s inexperience and unfamiliarity with who represents what in Washington.

Assuming that Trump really means what he says—that he wants to put America first and end the “forever wars”—those who have aspired to become his advisors on foreign policy must have pretended sympathy for his basic beliefs. It is here relevant that the leaders of his foreign policy team have long been a part of or closely aligned with the neoconservative network. In that network admirers of the revered political theorist Leo Strauss (who died in 1973) have been ubiquitous. A famous Straussian stratagem is that if truly enlightened people—“philosophers”—want to have political influence, they must feign loyalty to a leader but work quietly to advance their own agenda. The enlightened must practice deceit.

But, in this case, the dissonance would appear to be so obvious that even an untutored, unintellectual leader would notice. The current situation resembles the presidency of George W. Bush. Running for president Bush advocated a more “humble” U.S. foreign policy, but soon, and especially after 9/11, he dramatically changed course, raising doubts about the depth and sincerity of his previously expressed beliefs. Despite the original call for greater humility, Bush’s foreign policy and national security advisors were almost all strong hawks and interventionists, whether of the explicitly neoconservative type or, like Richard Cheney and Donald Rumsfeld, businessmen-politicians who found neoconservative rhetoric about universal principles a nice-sounding justification for saber-rattling and military assertiveness.

A 2003 book called America the Virtuous describes in-depth the neoconservative ideology of armed American global hegemony, which framed the foreign policy actions and rhetoric of the Bush administration. America was an “exceptional” nation. It was founded on universal principles belonging to all people, and America was called by history to bring freedom and democracy to the parts of the world not yet enjoying them. Neoconservative ideology was strikingly similar to that of the radicals of the French Revolution of 1789, the Jacobins. The French Jacobins had assigned to France the great missionary task of bringing “freedom, equality, and brotherhood” to the rest of mankind. The new, American Jacobins regarded the United States as the savior nation. America’s most immediate task was to clean up the Middle East. The neoconservatives had advocated war against Saddam Hussein long before 9/11.

But some people may object and point to how Trump disdains the Iraq war and “forever wars” in general. Those people will say that means he wants to put America first! These are the views that are so deeply offensive to neoconservative sensibilities, as is the president’s habit of calling himself a “nationalist.” So how could interventionism and military hawkishness possibly be sold to a person like him?

But suppose that the president’s stated foreign policy inclinations are more inchoate gut feelings than fully formed views. Assume further that he is intellectually not particularly alert or curious and that he lacks well-informed staff. Then making him accept unsympathetic advisors may not be as difficult as might be expected. Much can be accomplished by changing the labels for your own ideas and playing up whatever small agreements you have with the president. For key personages behind the scenes to weigh in on appointments can tip the balance.

Seizing upon the president’s fondness for “nationalism,” many American exceptionalists moved to refashion themselves, not by changing their minds but by changing appearances. The newly-minted nationalists adopted a method of bait and switch. They redefined nationalism and America First to mean the sort of thing that they favor but while soft-pedaling the interventionist implications of their ideas. To be a nationalist and a proponent of America First was now to be the same as to appreciate the exceptional nature of America, to demand “respect” for America, and to understand the need to defeat the enemies of American values.

Transforming themselves into nationalists while retaining their basic assumptions, these American exceptionalists attempted to co-opt and neutralize Trump-leaning nationalists. They sought alliances with the intellectually more inattentive and unsuspecting among them. The exceptionalists tried, with considerable success, to make the nationalists lower their guard and be more receptive to arguments for strong American leadership. A central objective was to gain admission to the Trump administration and to defuse the danger of so-called “isolationism.”

It is not surprising that in this project of dissimulation a major role would be played by admirers of Leo Strauss. Such individuals had played a key role in making the case for war against Iraq. This time the effort to influence the leader was greatly assisted by followers of the late Harry Jaffa, one of Strauss’s leading disciples. Several decades ago Jaffa founded the Claremont Institute in California. It was a few months ago at an award ceremony at the Claremont Institute that Mike Pompeo employed the just-mentioned bait and switch to co-opt nationalism. His theme was—where did we hear this before?—that America is “exceptional” and has a mission to resist evil in the world. America is, Pompeo said, “a place and history apart from normal human experience.” By virtue of its unique and great purpose, America is entitled to “respect” in the world, to dictate terms to “rogue” powers like Iran, and to confront nations like China and Russia that are “intent on eroding American power.”

Promoting themselves as nationalists, interventionists were back in business.

Another example of the paradoxical nature of the foreign policy of the Trump administration is its close association with the branch of evangelical Christianity that is most committed to intervention in the Middle East, the “dispensationalist” biblical literalism that is represented by Pastor John Hagee, which preaches unqualified support for Israel. Hagee gave a benediction at the opening of the American Embassy in Jerusalem and has been a visitor to the White House.

Pompeo has professed similar religious beliefs and has blended them with standard neoconservative universalist themes that justify American assertiveness. Speaking in July 2019 to Christians United for Israel, Pompeo declared that America “is given to defend the spiritual values—the moral code—against the vast forces of evil that seek to destroy them.” As was the case with the new Jacobins, Pompeo is on the side of “virtue,” fighting evil in the world. As any good nationalist would, right?

Let it be stated explicitly that, whether taken individually or in combination, all of the possible explanations for the president’s incoherence are deeply troubling.

Claes G. Ryn is a professor of politics and founding director of the Center for the Study of Statesmanship at The Catholic University of America. His many books include America the Virtuous and The New Jacobinism: America as Revolutionary State.