Donald Trump’s Coronavirus Diagnosis: A Nightmare for Him and the GOP? 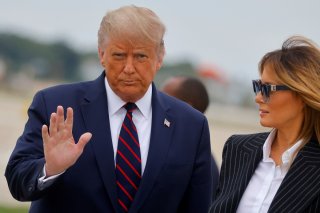 President Donald Trump’s announcement that he and first lady Melania Trump have contracted the coronavirus is a political disaster for him and the GOP. This October surprise could not have come at a worse moment for him.  “Tonight, @FLOTUS and I tested positive for COVID-19,” he tweeted. “We will begin our quarantine and recovery process immediately. We will get through this TOGETHER!” Now that Trump himself has a positive diagnosis, the implications for his campaign and the country are numerous.

For a start, there is the question of Trump’s own health. As a 74-year-old, he has comorbidities that put him at risk for serious complications. He will have to quarantine at the White House as will the first lady. White House operations may be compromised if it turns out that numerous other staffers were infected apart from Hope Hicks, who has been traveling with Trump on Air Force One. Vice President Mike Pence and his wife Karen have tested negative for the coronavirus.

The highest priority will be to ensure the health of both Trump’s now that they have been stricken by the coronavirus. CNN’s Stephen Collinson notes, “A President in medical peril is a situation that calls for humanity. The most serious known threat to a commander-in-chief's health for decades also calls for unity since it can bear on the security of the nation itself should US enemies seek advantage and probe a potential leadership vacuum.”

How did it get to this point? There will be serious questions about the White House’s flouting of pandemic protocols, including holding large-scale events at the White House where few wore masks such as the Republican Convention. Trump is also coming under fire for traveling to his golf club in Bedminster, New Jersey after Hope Hicks was diagnosed with the virus. Trump may have exposed dozens of his staunchest donors and fundraisers at the club to the coronavirus.

As Politico observed, “Trump’s diagnosis will raise serious questions about whether the White House’s coronavirus protocols were adequate — and whether the West Wing took the threat of the virus seriously enough.”

Trump’s campaign will also be in turmoil. It is unlikely that there will be any further debates between him and Joe Biden. Trump will be unable to lead the political rallies that were instrumental to his campaign in 2016. Above all, his campaign message has been crippled. It was predicated on the contention that the coronavirus was a mere speed bump that had already been left behind in the rearview mirror. “I just want to say that the end of the pandemic is in sight,” Trump declared on Thursday night in a videotaped message to the Alfred E. Smith Memorial Foundation Dinner, “and next year will be one of the greatest years in the history of our country.”

At the same time, Trump consistently mocked former Vice President Joe Biden for wearing a mask. “I don’t wear masks like him,” he said. “Every time you see him, he’s got a mask. He could be speaking 200 feet away from it. And he shows up with the biggest mask I’ve ever seen.” For Trump wearing a mask was synonymous with a lack of virility. He also branded Biden a physical wreck and declared that the virus would disappear “like a miracle.” Instead, it has struck him and his inner circle. Trump’s botched approach to the coronavirus has been a hallmark of his presidency over the past year. Indeed, writing in the National Interest, Dimitri K. Simes astutely observed,

“a lack of adequate preparation to a fairly predictable pandemic, an absence of minimally adequate supplies, a failure to organize mass testing comparable to what was done in most of Europe, China, Korea, and even Russia, has made the pandemic more severe than in most other advanced nations. The president’s emphasis on reopening the economy no matter what has also now contributed to a new wave of the virus, which in turn triggers new closings of the economy, more unemployment, zig-zags in financial markets, and a general uncertainty.”

Now the stakes have grown even higher. Trump, who wanted to shift the focus to a law and order campaign and Biden’s own record, will be the almost exclusive focus of the media in the coming weeks as his handling of the coronavirus and own health come under intense scrutiny. New polls indicate that Biden may be headed for a landslide victory. Without Trump at the helm as impresario, his campaign and presidency, more than ever, are in danger of completely unraveling.