Donald Trump’s Only ‘Crime’ Is Defending Himself 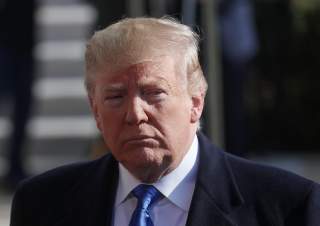 Impeachment is a game that Democrats are playing with Donald Trump, and the game’s only rule is “heads I win, tails you lose.” The president is familiar with these rules by now, as they’re the same ones that governed the investigations into Russian meddling in the 2016 election. FBI Director James Comey told Trump at the outset that he was not a target of the investigation. Yet anonymous quotes and other questionably sourced reports continued to appear in the press claiming that Trump was a Russian asset—as Hillary Clinton might bluntly put it—and so the president asked Comey to say in public what he had told him in private. Comey refused, and Trump soon fired him.

This act of self-defense, or pique, depending on your point of view, triggered calls for the appointment of a special counsel to take over the investigation—which ballooned from an investigation that didn’t center around Trump into one in which Trump’s behavior toward Comey was grounds for investigating the president. Comey had made a power play: by telling the president that he was not a subject of the probe and then refusing to issue a statement to that effect, Comey was making the point: Trump might be the country’s elected executive, but men like Comey were the government. Officials could leak, they could issue anonymous quotes prejudicial to the president, and all Trump could do was wait until Comey decided to clear his name.

Other politicians might play by those rules out the desire for self-preservation. Trump chose not to. And so, an ex-FBI director, who may have had hopes of becoming director once again, took over the investigation. Comey would not go unavenged. Mueller ultimately found nothing criminal or meriting a recommendation of impeachment in Trump’s behavior. But by the time he issued his report, the protracted investigation, and all the hype about Trump and Russia that it sustained, had done its political damage and hammered the lesson home. Republicans suffered a bloodbath in the 2018 midterms, and the next president would think twice—and then twice again—about treating an FBI director as his underling.

The Ukraine corruption that is at the heart of the Democrats’ impeachment project involves the same logic if somewhat different players. On January 11, 2017, Politico ran a news story under the headline “Ukrainian efforts to sabotage Trump backfire.” The story documented Ukraine’s meddling on behalf of Hillary Clinton in the 2016 U.S. presidential election. Kenneth P. Vogel and David Stern summarized the findings:

Ukrainian government officials tried to help Hillary Clinton and undermine Trump by publicly questioning his fitness for office. They also disseminated documents implicating a top Trump aide in corruption and suggested they were investigating the matter, only to back away after the election. And they helped Clinton’s allies research damaging information on Trump and his advisers, a Politico investigation found.

If a foreign power involves itself is a U.S. election like that, shouldn’t America ask questions? And shouldn’t aid money to that foreign power be held up until those questions were answered—not least because withholding those funds might be necessary to compel cooperation with the investigation and to get the foreign interest to mend its ways? The questions Trump had to ask in this case, however, involving what ties Ukrainians had to prominent Democratic Party figures, could and would, of course, be portrayed by Democrats and the media sympathetic to them as a kind of election interference in its own right. Why, Trump was demanding a quid pro quo from Kiev—the funds in return for information about the Democrats or an investigation that would embarrass a possible 2020 nominee. Again, as Trump’s enemies would have it, he loses if he acts (by firing Comey, by urging Kiev to look into questionable behavior by or benefiting Democrats), and he loses if he doesn’t act (and simply accepts mischaracterizations of the Russia investigation in the press or Kiev’s intrigues with Democrats). Trump has a predilection to defy his enemies—something they might now have come to count on—so rather than taking the beating they want to mete out to him, he hits back, and then they cry foul. The media intensifies its insinuations that Trump has broken one or more laws (though just which law remains vague and hardly even argued, let alone proven), and the president’s foes reach for their institutional weapons: the special counsel provisions and now impeachment proceedings. When Republicans do not go along with the kangaroo court, well-paid ex-conservatives are hauled out to bemoan the lost integrity of a party whose last president misled the country into ceaseless wars in the Middle East—with these very same ex-conservatives having led the cheers for those interventions.

Trump was within his rights as president to demand answers from Ukraine. And if he stood to benefit politically it was because Ukraine had already involved itself in American politics on the side of Democrats: severing those dubious ties and preventing further manipulation of U.S. elections would necessarily come at the expense of the party that Ukrainians had cultivated when Barack Obama was in power and which they had hoped to keep in power by helping Hillary Clinton. Ukrainians are only acting in self-interest here: they understandably want to enlist U.S. power in every way possible as a check upon Russia. The prospect of American politics taking a turn toward rapprochement with Russia stirs Ukraine to take one side in our elections and Russia to take another. This is an old familiar pattern in American politics—as old as the Washington and Adams administrations, when revolutionary France and counter-revolutionary England had interests in our elections, and America’s ideological factions were inclined to favor one power or another. Neutrality was the course that George Washington urged, and by and large, it was the one that won out, even when the French-sympathizing Thomas Jefferson and James Madison came to power.

A lesson from George Washington would stand the leaders in Washington, DC in good stead today. But Democrats in Congress have other ideas: Ukraine may have failed to elect Hillary Clinton in 2016, but Democrats hope to use Ukraine to remove Trump now, either through impeachment—a longshot—or by weakening him and the GOP ahead of the 2020 election. And Democrats hope that Republican senators will be so embarrassed and perhaps divided by a trial in the Senate that they will lose control of that chamber in 2020, too. They know Trump will keep fighting, and the harder he fights, the more he refuses to play by the rigged rules of the game, the more opportunity Democrats see to frame his defensive moves as outrageous and impeachable offenses. With Nixon and Watergate, the cover-up was often said to be worse than the crime. With Trump, there is no crime, but his defiant acts of self-defense are enough to convict him—or so the Democrats and their allies hope.