Donald Trump and the Age of Unconventional Diplomacy 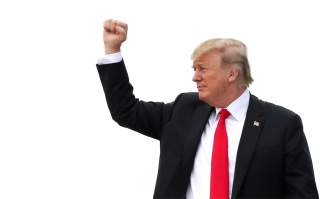 To be honest, it was hard to stomach the president’s joint press conference with Vladimir Putin. The Russian is one of the most odious leaders on Earth.

However Trump may feel about Putin, one thing is certain: when Trump engages, he engages his way.

The Trump that lives in the heads of his critics is either a) impulsive, ill disciplined and tone-deaf or b) the Manchurian candidate.

The problem with these facile conclusions is that, in the end the facts have to add up. And if the argument is that Trump is a Putin puppet, then they don’t add up.

Thus far, the policies coming out of the Trump administration have been the toughest on Russia since the Reagan administration. And it is the actual policy—not the random tweets and off-hand comments—that matter.

So, what were the actual policy changes arising from the summit? Apparently none. There wasn’t public statement that suggested any compromise or weakening of the U.S. stance on substantive issues—not on NATO, strategic arms, the security of Ukraine, the status of Crimea or any other hot button issue.

In many ways, Helsinki was an instant replay of the Singapore Summit—where Trump heaped praise on a detestable man (Kim) and side-stepped contentious issues (like North Korea’s appalling human-rights record). At both Singapore and Helsinki, the president gave away nothing of great substance. Still, just the tenor of the conversations make many uncomfortable.

Why Does He Do It?

Trump does this because—notwithstanding the jeers of his detractors—he is disciplined and consistent. He knows what he wants. He wants a world where competitors—including Russia and North Korea—stop threatening U.S. vital interests. His formula for getting there includes a large dose of peace through strength: showing strong face to his enemies with military and economic pressure (and demanding that our friends and allies do the same—even when they would rather not).

But Trump also wants to offer his competitors a chance to stop competing—an option that, if they were smart, would benefit them as much as America and its allies. Part of that strategy is to offer everyone an off-ramp, an opportunity to back off. Trump has made that pitch to the Chinese. He made it to the North Koreans (even scripting a video to show them a different way). He has even publicly stated that if the Iranians want a do-over that will yield a more realistic deal, then they should give him a call.

Trump has also sent a strong sign the off-ramp is open for Russia. But hurt feelings over the 2016 election makes the opening to Putin particularly jarring. They guarantee that any discussion about Trump and Putin quickly devolves into partisan—and often quite unreasonable—talking points.

As a result, whenever the president speaks of the issue, it only fans the flames. It’s doubtful that he could calm the waters on this issue, even if he wanted to. And he seems to have little interest in trying.

There is no question that the president pays a price for offering Putin an opening. It offers plenty of ammunition for those aiming at bringing his credibility under fire.

And certainly there was plenty in the press conference that disappointed. Trump missed multiple opportunities to hold Putin accountable on the international stage—a move that would have greatly reassured friends and allies of American resolve.

Trump’s silence on big contentious issues like Russian aggression in Ukraine or the nerve agent attack in Britain was extremely disappointing. Further, while it’s fair to say that the weakness displayed by the Obama administration enabled Russia’s bad behavior, it is wrong to blame the naif. Obama is not responsible for the breakdown in U.S.-Russian relations. Since 1999, Putin has pursued an agenda to undermine the United States and its allies.

Trump should have reiterated the tough line he took on Nord Stream 2 during the NATO Summit. He was wrong to mince words at the press conference regarding the geopolitical risks of Russia’s expansionism and trouble-making.

He missed an opportunity to fully back his intelligence agencies on the issue of Russian meddling in the U.S. presidential campaign.

Why Does He Do It?

That’s Trump’s way. He is single-minded. He shrugs off the criticism as the price of doing unconventional diplomacy.

He feels secure at home. He doesn’t think his supporters are going to throw him under the bus for taking a soccer ball from Putin.

He believes that, in the end, America’s friends and allies will stick with him if he delivers results: security, stability and prosperity.

He dismisses the critics who say he has impugned America’s credibility and honor. They had their chance, he argues, and they failed. Who are they to tell them he can’t try his way?

The Problem with Putin

The plain truth is there is every reason to doubt Putin will turn onto the off-ramp.

Why does he do it?

To be fair, this is not just a replay of the efforts made by President George W. Bush or President Barack Obama. Both gave the Russians something for nothing at the front end and got burned. Never give a Russian something for nothing. In Trumpian statecraft, happy talk is cheap. He is happy to hand it out like Trump Hotel gift pens. They don’t cost much.

What Trump has not given away—so far—is anything of substance. As long as America’s underlying vital interests are protected, Trump is willing to try something different. Peace through strength is the safety net underlying this approach.

It goes without saying that Trump’s statecraft is as unsettling to the stomach of traditional diplomacy as a milkshake with a lemonade chaser.

Moreover, there is a danger here. Let’s be honest. If Putin tries to test Trump and push a little harder, then Trump will have to hit back hard. That will make everyone nervous. Alternatively, Trump could blink. That would undermine his credibility faster than fist-bumping a dictator.

Image: U.S. President Donald Trump pumps his fist as he boards Air Force One to depart for travel to a campaign rally in Duluth, Minnesota from Joint Base Andrews in Maryland, U.S., June 20, 2018. REUTERS/Jonathan Ernst