Donald Trump Can't Forget What Got Him Elected 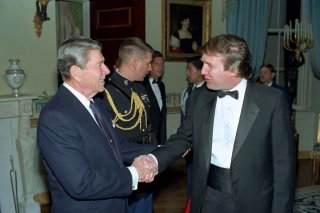 The conundrum reflects the questions that face any president-elect—how much to reach out to those who never gave support during the late campaign; how much to demonstrate a willingness to compromise on fundamental issues and commitments expressed in getting elected; how much to emphasize post-election national unity as opposed to concentrating primarily on succoring those responsible for the victory. But of course with Trump—as with, for example, a Ronald Reagan—the conundrum is more stark than normal because they promised major departures from status quo thinking and policies. Thus there is more room for perceiving, or making accusations of, trimming and wobbling.

The humbug also besets any president-elect—quick conclusions of trimming and wobbling by, first, those concerned that he won’t live up completely to what they consider sacrosanct campaign promises; and, second, those who want the man to fail because they despise his philosophy and policies.

So far, Trump supporters have been largely muted in any expressions of concern that Trump ultimately will fail them by bowing to the establishment and elite institutions he ran against. There seems to be an inclination to give him the benefit of the doubt. One strong supporter, commentator and onetime insurgent presidential contender Patrick Buchanan, quoted Churchill’s famous dictum, “In victory, magnanimity!” But he added that the victor should shun promptings that he “reach out” to those upset by his victory and trim or temper his agenda to reassure them. “Trump,” he wrote, “should reject the poisoned chalice. This is the same old con.”

This reflects the feelings of most Trump supporters, who voted for him because they hungered for a departure from what they considered the ossified thinking and failed policies of both parties. The president-elect’s first concern must be to keep faith with these people. That’s simply sound politics; anything less would be indefensible.

But in practical terms this can get complex. That’s where the conundrum comes in. Take, for example, the Affordable Care Act, President Obama’s signature domestic initiative, which Trump attacked and ridiculed throughout the campaign. In his first post-campaign interview, with The Wall Street Journal, Trump signaled a willingness to leave in place two key elements of that federal health program—namely, the prohibition against insurers denying coverage because of a patient’s existing condition and the allowance that children can be kept on parents’ insurance policies until age 26.

This was seized upon by many in the media as a sign of trimming and wobbling. But these popular elements were always going to be part of any Republican replacement legislation, and hence this hardly represents the retreat many portrayed. Besides, the Affordable Care Act already is close to death. Premiums and deductibles are soaring, doctor networks are shrinking, and some 20 percent of Americans now live in counties where they can get coverage from only one insurance company. Democratic nominee Hillary Clinton acknowledged implicitly that the current system isn’t sustainable when she called for expanding it into a governmental, single-payer system.

That option now has been foreclosed by Trump’s election, which means the replacement system, far from the single-payer concept, will be a market-oriented program designed to restore to health-care recipients greater control over their medical decision-making. Getting from the Obamacare disaster to such a program will be extremely difficult, however, not least because current enrollees will have to be maintained in their coverage during the transition. This will require a highly delicate and sustained political campaign through much of 2017, with plenty of resolve, appeals to the American people, old-fashioned legislative horse-trading and, yes, compromise.

Is Trump up to this kind of political challenge? We don’t know. But to suggest, based on his remarks to The Wall Street Journal, that he already has given up the ghost is pure humbug.

Then there is the question of the men and women he selects for key administration positions. Friend and foe alike will seize on many nominees as evidence of backpedaling on his campaign pronouncements. But it should be noted that Trump pioneered a new matrix of policy prescriptions, and his matrix hasn’t yet had a chance to catalyze the emergence of a strong body of adherents within the Republican Party. There simply aren’t enough figures outside the GOP establishment to fill the governmental slots before him.

This is particularly true with regard to foreign policy. Before Trump laid waste to the party establishment in the nomination process, it was thoroughly dominated by the neoconservative faction, which advocated ongoing American nation-building abroad mixed with uninhibited hegemonic thinking. To these people, America was the indispensable nation, destined to dominate world events. Marco Rubio, Jeb Bush, John Kasich, Ted Cruz, and Carly Fiorina all embraced this outlook. Nearly two-hundred foreign policy “experts” signed letters saying they couldn’t abide a Trump presidency and would never work for him.

Alone among the GOP contenders, Trump took on this viewpoint in frontal attacks. He not only said the Iraq invasion was a mistake but added that it was perpetuated by George W. Bush based on lies to the American people. He refused to join the chorus of those who want to contain Russia even within its own traditional sphere of influence and declined to attack that country’s leader, Vladimir Putin, a bugaboo foreign leader for most of the GOP establishment. In Syria, he said he would concentrate on defeating Islamic State  rather than confuse that mission by going after that country’s president, Bashar al-Assad. While he lambasted Obama’s nuclear deal with Iran, he carefully avoided a promise to “tear it up on day one,” as most of his opponents had vowed. He questioned the utility of a NATO alliance that was a defensive bulwark in the Cold War but has become aggressively expansionist since the end of that long-ago era.

Here’s where Trump will face the greatest pressure for trimming and wobbling—and also where he will face his greatest difficulty in plenishing his government with people who think along the lines of his campaign rhetoric. It creates a somewhat vertiginous feeling to see the editors of National Review, who fiercely opposed Trump, now offering him counsel on the top posts he needs to fill. And he won’t find many like-minded prospects for government jobs in the opposition party, dominated as it is by humanitarian interventionism not far removed from the neocon philosophy. Hence, this is where those who want a serious departure from the status quo should pay most attention as Trump chooses top governmental figures and crafts his policy prescriptions.

But in foreign policy, as in domestic matters, it’s best to give the new president some flexibility in forging his team and fashioning his message. Policymaking in the American system never is a straight-line proposition; presidents must navigate the shoals of politics often through zig-zag maneuvers and putting together teams of rivals. But the real question is always where he ends up.

A case in point involves Reagan, who also included in his government some figures from his party’s traditional domain, which had been vanquished by the California governor during the 1980 campaign. When he selected George Herbert Walker Bush as his running mate and later installed Bush acolyte James Baker as his chief of staff, supply side guru Jude Wanniski complained that Reagan had created a gangplank into his administration for people hostile to his goals and aims. To some extent this was true. Not everyone embraced “Reaganomics” with equal fervor, and some remained stealthily opposed.

Reaganomics prevailed nonetheless, notwithstanding these errant personnel decisions and the fervent hostility toward the Reagan program from some major Republican figures in Congress, most notably Senate Finance Committee chairman Bob Dole of Kansas. But Dole, after all, couldn’t take on the sitting president in any frontal fashion, and ultimately he had to accept the inevitable triumph of Reagan’s tax and spending program.

What made it inevitable? Two things: first, Reagan’s unwavering commitment to his program throughout the process and in the face of all opposition; and, second, his willingness to compromise tactically—and with considerable negotiating brilliance—around the edges. Those factors overwhelmed all opposition both within the administration and in Congress. And early comments from the president-elect and initial personnel actions, however alarmingly they were seized upon by expectant pols and commentators, didn’t really have much impact on the outcome.

Thus it is wise to resist the humbug of assessing prematurely what various discrete decisions and pronouncements might mean in terms of Trump’s commitment to his bold campaign advocacy. But it is wise also to recognize the delicate aspects of the co-option conundrum—the complex matrix of decisions on whom to hire, whom not to hire, how to weight policy priorities, when to go bold, when to compromise, how to maintain steady political progress on major initiatives, when to play the inside game and when to go public. All this will unfold in due course and will tell us what kind of president the country elected.