Is Donald Trump on the Comeback Trail? 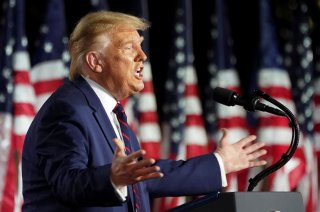 With his lengthy speech last night, Donald Trump made it clear that he’s going on the offensive. His delivery was flat and he often clutched the podium like a man on a boat in heaving seas, but the pageantry was peak Trump. In a scene worthy of Citizen Kane—one of his favorite movies, incidentally—Trump turned around to face the White House and raised his arms and bathed in the glow of the lights. He was exultant. The message was clear: the White House is really the Trump House. It belongs to him—and he isn’t going anywhere.

The most effective rhetorical delivery came from Ivanka. She didn’t wear an iridescent green dress like her rival Melania, who shot her a withering glance, but Ivanka spoke with outward passion and conviction. She went further than Melania did in her soothing address the previous evening. Ivanka unflinchingly served not only as a character witness for her father, but also lauded his policies, declaring that “the results speak for themselves.” Unlike in 2016, Jared was seen but not heard. It is Ivanka who is preparing for a future run for the presidency.

For that to happen, Trump must win re-election. As he battled his way through a speech that appears in many parts to have bored him, Trump homed in on the theme of law and order. He was plainly indifferent to the pandemic sweeping across America. He offered what amounted to a presidential masterclass in political evasion. Virus, what virus? The assembled, mostly mask-less crowd was intended to suggest that the crisis was far in the past, though Trump did indicate that he expects to approve a vaccine before the end of the year. What its efficacy would be was left unsaid. Perhaps Trump would follow in Putin’s footsteps and order his daughter Tiffany to submit to an injection to try and bolster public confidence in it.

The message of law and order is the message that Trump sought to deliver. As Susan Glasser notes, Trump has not in fact reinvented himself. He has been true to himself. There was no attempt by Trump to soften his edges. He waded right into the culture wars. The truth is that he does not have many arrows in his quiver. He did what he must do—raise the specter of angry, left-wing hordes ransacking America and blame it on Biden himself. The Democrats, he said, are giving “free rein” to criminals. Destruction loomed large. The very American way of life would be “destroyed” if Biden became president. Biden is a “destroyer of American greatness.” And so on.
In a sense, the Democratic and Republican conventions reached a perfect symmetry with each warning that the country is a goner if the other side gets into power.

Whether Trump’s broadsides will provide him with a bump in the polls is an open question. But he made it clear that he’s lost none of his zest for the fight. Trump, a born showman, is pulling out all the stops to overwhelm the opposition to him. The plaintive cry that he is smashing norms merely serves as affirmation to him and his followers that he’s doing the right thing. When he announced, “let’s see what happens” in regard to the Russia investigation, it was hard not to think that he might launch an October surprise in the form of indictments of leading Obama administration officials.

Biden has been put on notice. Trump has a plan for a crusade. The true battle between the two sides has only begun.