Is Donald Trump Getting Ready to Run in 2024? 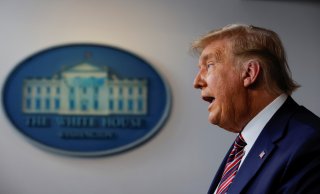 President Donald Trump added to the ballooned predictions of a 2024 presidential bid during his remarks at a White House holiday party on Tuesday night.

“It’s been an amazing four years,” Trump said to roaring supporters at an indoor holiday event. “We’re trying to do another four years. Otherwise, I’ll see you in four years.”

The video, which was streamed live on Pam Pollard’s Facebook page revealed a large number of people without masks, crowded together in support of the president—amid the seething coronavirus pandemic that’s infecting the country at unseen rates. Pollard is a member of the Oklahoma Republican Party.

The event was one of more than two dozen holiday parties expected to take place at the White House in upcoming weeks, even as the threat of the virus drowns major cities across the country.

The video is the most recent public tease at Trump’s 2024 White House bid, as reports first flourished in November about his potential candidacy. Sources close to the president told Axios last month that Trump was considering pulling a President Grover Cleveland by running non-consecutive terms, in the event that President-elect Joe Biden is certified the winner of the 2020 race and the president is nixed from the White House.

Cleveland was the only president in history to successfully leave his presidency and return to serve in a second term four years later after another president held office.

Ansolabehere also pointed to former President Theodore Roosevelt in the 1912 presidential election, where he unsuccessfully ran as a third-party candidate under the Bull Moose Party in a three-way race to the presidency, a party that opposed typical conservatism and called for social legislation and active federal oversight of the economy.

Trump might decide to form his own third party based on “Trumpism” ideals in 2024, similar to what Roosevelt did in the 1912 election.

The president has attempted to reverse the 2020 election results through a legal cascade, claiming the race was filled with massive accounts of voter fraud and therefore a stolen election. But as the president and his legal team has been faced with several defeats in the courtroom, GOP party members are disfavoring future efforts of trying to overturn the results.