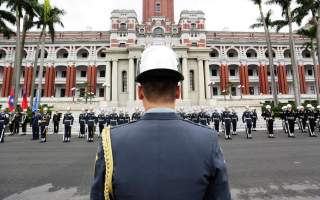 As a long-retired Foreign Service Officer who served in U.S. embassies both in Taipei and Beijing and on the State Department’s Taiwan desk during the Carter and Reagan administrations, I am pleasantly amused by the media kerfuffle that engulfs Taiwan president Tsai Ing-wen’s congratulatory phone call on Friday (December 2) to President-elect Donald J. Trump. The president-elect’s subsequent tweet that it is “interesting how the U.S. sells Taiwan billions of dollars in military equipment but I should not accept a congratulatory call” made eloquent sense of the incoming president’s approach to foreign policy in general and of his disdain for self-imposed sensitivities about U.S. policy toward China in particular.

Indeed, just two months ago, the top Pentagon official dealing with Taiwan noted for the record that “Taiwan is the United States’ largest security cooperation partner in Asia. Since 2010, we have notified Congress of more than $14 billion in arms sales.” Surely, a customer who purchases $14 billion in U.S.-made, high-tech goods deserves at least a polite phone call. On this, the president-elect’s gesture was shrewd and generous.

I recall a similar incident with Governor Ronald Reagan in August 1980, then the Republican nominee for president, who opined that he should reestablish “official relations” with Taiwan after President Carter’s derecognition of Taipei in his opening to Beijing of December 1978. The media were apoplectic with condemnations of Governor Reagan’s recklessness and poor understanding of diplomacy. But Reagan won, and the Reagan administration’s subsequent policies toward both Taiwan and China were America’s most successful and effective before or since.

Mr. Trump is now the butt of similarly ill-informed commentary by both media figures and former U.S. diplomats who should know better. For the record, let me interject that the United States does not now recognize, and never has, a “One China” of which Taiwan is a part.

The December 15, 1978, U.S.-China Normalization Communiqué states that the U.S. side “acknowledges the Chinese position that there is but one China and Taiwan is part of China.” It is often forgotten that two months later, on February 22, 1979, President Carter’s deputy secretary of state, Warren Christopher, explained in Senate hearings that the United States has “acknowledged the Chinese position that Taiwan is part of China, but the United States has not [italics in original] itself agreed to this position." This remains the position of the United States today.

On the matter of U.S. arms sales to Taiwan, which the Chinese have so strenuously resisted, I recall during my tenure on the Taiwan desk in 1982 that Chinese diplomats demanded that President Reagan honor President Carter’s “pledge” to terminate arms sales to Taiwan after normalization. China demanded that Reagan issue another communiqué promising to cease arms transfers to Taiwan. James Lilley, President Reagan’s top China advisor in the White House, asked President Carter about this pledge, and the former president said, “I never made such a commitment. I can tell you that I wouldn’t have made it.” Reagan then ordered that thenceforth communiqué negotiations with Beijing be grounded in the understanding that no “pledge” was ever issued and that arms sales to Taiwan would be eased off only on the understanding that China pursued a peaceful resolution of its differences with Taiwan.

The “Six Assurances” were widely publicized on Taiwan and in the United States at the time, and again were criticized widely in the media for their apparent disregard for China’s hurt feelings. But they shrewdly served notice to Beijing that China could either accept a vague declaration predicated on China’s “peaceful” approach to Taiwan, or no communiqué at all.

Beijing relented and opted for a noncommittal communiqué. On the same day that the “August 17, 1982 communiqué” was published, President Reagan took the unusual step of issuing a short, four-paragraph confidential presidential directive, which he ordered to be initialed personally by both his new secretary of state, George Shultz, and then U.S. secretary of defense Caspar Weinberger. That directive reasoned, “In short, the U.S. willingness to reduce its arms sales to Taiwan is conditioned absolutely upon the continued commitment of China to the peaceful solution of the Taiwan-PRC differences. It should be clearly understood that the linkage between these two matters is a permanent imperative of U.S. foreign policy.”

President Reagan further instructed that “it is essential that the quantity and quality of the arms provided to Taiwan be conditioned entirely on the threat posed by the PRC. Both in quantitative and qualitative terms, Taiwan’s defense capability relative to that of the PRC will be maintained.”

The next day, August 18, Assistant Secretary of State John Holdridge personally appeared before a congressional committee to announce the sale of 250 new F-5E/F fighter jets to Taiwan. Again, it was a firm reminder to Beijing that the Chinese must first demonstrate a peaceful approach to Taiwan before the United States would “reduce” its arms transfers to Taiwan. Alas, since then Beijing’s threat has only increased, as have U.S. arms sales to Taiwan.

The substance of Washington’s so-called “One China Policy,” however, was left vague, with President Reagan’s sixth assurance, “the United States would not formally recognize Chinese sovereignty over Taiwan,” as the last word.

Two decades later, the “One China Policy” morphed into “Our One China Policy.” On April 25, 2004, President George W. Bush’s assistant secretary of state, James Kelly, explained “Our One China” to a Congressional committee: “The definition of one China is something that we could go on for much too long for this event. In my testimony, I made the point of our one China, and I really did not define it. I am not sure that I very easily could define it. [But] I can tell you what it is not. It is not the one China policy or the one China principle that Beijing suggests, and it may not be the definition that some would have in Taiwan.”

Indeed, Kelly was one of the few in the State Department who actually understood the U.S. position on “One China” and tried his best to differentiate it from Beijing’s by calling it “Our One China.”

President-elect Donald Trump’s telephone call with Taiwan president Tsai is a fresh Reaganesque breeze clearing the air of recondite jargon and misinformation that has enveloped Washington’s China policy for the past quarter century. It is evidence that a Trump administration intends to pursue a new American bargaining approach to China’s behavior in the South China Sea, to its trade cheating and disdain for intellectual property, cyber attacks, currency manipulation, dumping, space warfare, ill treatment of foreign business, threats to U.S. allies and partners in Asia, and China’s aid to nuclear-armed rogue states. After all, the past twenty-five years of “engagement” with China haven’t been working out too well for us.