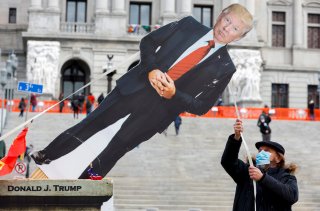 One president faced almost unhinged political opposition and media coverage that cast his election as illegitimate before he lost his bid for a second term. Another president was a rabble-rouser always raring for a fight, and constantly airing grievances until he was impeached in an election year by an eager opposition party.

John Quincy Adams and Andrew Johnson—two presidents who couldn’t be more different—both share some common ground with Donald Trump and might offer a window to the forty-fifth president’s political future. Also, like Trump, Adams and Johnson each have a unique role in the history of U.S. impeachment inquiries, as explained in Abuse of Power: Inside the Three-Year Campaign to Impeach Donald Trump.

Fast forward to the present day, almost no one expects House managers to persuade sixty-seven senators to convict and disqualify Trump from holding federal office again. The question is whether he would even want a future office, and if so, which office?

The perhaps faulty presumption is that Trump will seek to emulate Grover Cleveland who lost in 1888 only to come back and win re-election in 1892—the only president with non-consecutive terms. Another Trump presidential race in 2024 would be messy and difficult. Not that he minds messy. But, the difficult part he might be fed up with.

The pre-coronavirus Trump administration has a far better record to look back on than either of these presidents. And, while he would be less powerful in Congress—Trump could still be a GOP kingmaker and with fewer responsibilities.

Members of Congress cast votes and make speeches. To be sure, there are workhorses that devote their time to drafting what they hope will be historic legislation. But Congress has a lot more show horses who devote time getting booked on talk shows and making speeches. Being a member of Congress would afford Trump a platform to tout the MAGA agenda, and continue national rallies even if he only represents a single state or congressional district.

Should he want to be a senator, his adopted home of Florida is an option but would be a bigger hurdle despite his twice carrying the state in presidential races. There are just too many other states where he would win with little effort. He could take the Jay Rockefeller route of establishing a residence in a state where he could easily buy a Senate seat, as the New York Democrat did in West Virginia.

As for House districts, he could opt to remain in Florida, or pick any number of districts across the country where he carried close to 90 percent of the vote in 2020.

Johnson spent most of his presidency trying to block Reconstruction and civil rights in the south. Unpopular nationally, surviving the Republican impeachment actually made Johnson very popular when he returned to Tennessee, a state where many previously considered him a traitor for his loyalty to the union and for joining a Republican presidential ticket with Abraham Lincoln. He dabbled in Tennessee politics, but it wasn’t until 1875 that he returned to the U.S. Senate. Some of the Republican senators that voted for his ouster shook his hand—others still held a grudge.

His post-presidential Senate career was uneventful, cut short by his death that same year as the only former president to serve in the Senate in addition to being the first impeached president.

Adams, the son of a one-term president, won the 1824 election after that alleged “corrupt bargain” in which the House decided the outcome when no candidate won a majority of electoral votes. Andrew Jackson, who won a plurality in the Electoral College, built a political movement (known today as the Democratic Party) around alleging he was robbed.

Crowds booed President Adams in theaters, and he was unable to accomplish most of his agenda, as the Jacksonian movement built an entire infrastructure of newspapers to attack the president. In 1828, Jackson came roaring back and trounced Adams in a landslide.

But Adams wasn’t finished. Still popular in Massachusetts, he was elected to the U.S. House of Representatives and served from 1831 to 1848. He became a champion in the anti-slavery movement. He opposed the Mexican-American War and the annexation of Texas out of fear both would expand slavery in the United States. He was unsuccessful on those fronts, but helped eliminate the “gag rule.”

The infamous “gag rule” wasn’t quite the same as getting banned from Twitter, but had its similarities.

Adams’s speeches on slavery was the chief reason Democrats instituted the “gag rule” in the House in 1836 to prohibit debate on petitions to abolish slavery. Adams persisted to be a troublemaker and even baited opponents into talking about what he wanted to discuss—which sounds familiar with Trump. Adams led the defeat of the “gag rule” in 1844. While a member of the House, he also successfully argued before the U.S. Supreme Court for the freedom’s cause in the famous United States v. The Amistad case.

Perhaps not his finest moment was when Adams chaired the select committee that investigated the possible impeachment of President John Tyler, who the Whig majority in Congress considered trying to oust essentially over policy agreements. The House ultimately stepped back from the precipice. Nevertheless, the investigation itself is still referenced as an example of how impeachment inquiries are conducted.

Should Trump go to Congress, then he wouldn’t likely have the storied career of Adams, but would very likely surpass that of Johnson.

This should not be construed as advice to anyone, only noting there are historic alternative—albeit rare—paths for a former president aside from either retiring to absorbent speaking fees and presidential libraries, or actually seeking to return to the White House.