Donald Trump Is Intent on Global Domination—of the Energy Sector 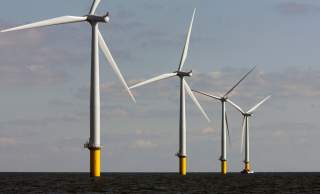 As the U.S.–China trade relationship continues to fray, an unlikely sector is bringing the two superpowers closer together: U.S. oil exports.

In the wake of North Korea’s recent missile and nuclear tests, trade concerns between China and the United States—most notably those surrounding America’s hefty $309.6 billion trade deficit, market access and Chinese excess capacity—have reached a boiling point. Several weeks ago, the Trump administration announced its intent to levy trade measures against the People’s Republic of China should it be found guilty of unlawfully expropriating U.S. intellectual property. China has made clear that any such actions could “poison” the trade relationship, and that it would defend its interests if necessary.

Since then, tensions between Washington and Beijing have escalated still further. In late August, the U.S. Treasury Department imposed sanctions on several Chinese companies and individuals with ties to North Korea’s weapon’s program. And President Trump has tweeted that the United States may take the unprecedented step of cutting off trade relations with countries like China, which is one of Pyongyang’s trading partners.

Indeed, it’s not a stretch to say that the past fifty days may mark the lowest point in bilateral Sino-American relations in recent memory.

Ironically, however, the Sino-American energy relationship is stronger than ever. While the People’s Republic of China has been a reliable customer of American refined petroleum products and liquids (gasoline, diesel, butane, ethane, etc.) since the early 1990s, an export ban on U.S. crude prohibited China from purchasing unprocessed oil—until now. Since the ban was lifted in December 2015, Chinese purchases of U.S. petroleum have skyrocketed. The United States saw its overseas shipments of unrefined petroleum surge from almost zero in early 2016 to a record high of 1.33 million barrels per day in May of 2017, with Beijing emerging as a preeminent buyer of American oil. Between January and May of this year alone, China accounted for over 20 percent of America’s global crude-oil sales ($1.6 billion in value), enough to temporarily displace Canada as the United State’s number one oil export destination.

This phenomenon is being propelled by two powerful trends: China’s quest for energy security, and America’s energy renaissance.

China surpassed the United States as the world’s largest energy consumer nearly a decade ago, in 2009, and never looked back. Last year, it burned 3,500 million tons of oil equivalent of primary energy (fuel energy consumed in all its forms from gasoline to nuclear power), far surpassing America’s 2,273 million tons of oil equivalent. And while coal accounts for an overwhelming majority of China’s total energy usage, petroleum—which has no viable large-scale substitute—constitutes nearly 20 percent. This is a problem for Beijing, because despite incremental gains over the past decade, China’s national oil companies are simply unable to satisfy demand. All of this has led to soaring Chinese consumption of foreign oil (more than eight million barrels imported daily), 56 percent of which hails from Russia, Angola, Saudi Arabia, Iraq and Iran—hardly paragons of reliability.

This is where the United States comes in. Plagued by its own energy-security concerns over the past forty years, America now enjoys an energy superpower status thanks to the shale oil and gas revolution. With the advent of hydraulic fracturing (fracking) and horizontal drilling, U.S. oil production has increased more than 80 percent over the past decade. For the fifth straight year, the United States has remained the world’s top producer of petroleum and natural gas hydrocarbons, beating out traditional heavyweights Russia and Saudi Arabia. Even its crude exports, banned prior to 2015, now surpass those of many Organization of the Petroleum Exporting Countries.

This, moreover, is just the beginning. The U.S. Department of Energy anticipates that 2018 will see U.S. production levels reach ten million barrels per day—an all-time record—lifting exports to well over two million barrels per day. (This estimate may prove low if America's crude oil price continues to undercut its European and Middle Eastern market competitors). America’s breathtaking energy transformation over the past decade has prompted the current administration to take traditional promises of “energy independence” a step further, now calling for an age of American “energy dominance.” This rhetoric reflects a growing conviction in Washington: not only will the United States become self-sustaining in energy in the near future, it will also soon possess the means to utilize excess capacity as a tool of economic statecraft. That is, of course, if market forces cooperate.

Where does that leave Washington and Beijing? For the time being, it seems that this win-win relationship is safe from the larger tumult of the Sino-American relations. To the Chinese, ensuring the dependable and affordable flow of energy into their economy is a top priority. From the perspective of an embattled White House, energy sector expansion remains one of the few policy areas drawing bipartisan praise. It is unlikely that the current administration would take actions to jeopardize its energy relationship with the world’s second largest economy.

James Grant is a researcher at the American Foreign Policy Council in Washington, DC.