Donald Trump Is No Kaiser Wilhelm 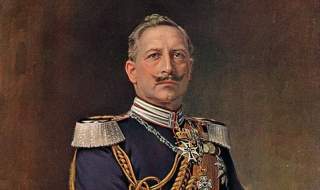 Is Donald Trump the Kaiser Wilhelm of 2017? For some time, Trump’s critics have been alleging that he bears a close resemblance to Kaiser Bill. The indictments are as sweeping as they are fierce.

In the Independent, David Banks observed, “the prerogatives of the presidency, combined with Trump’s erratic and oversized personality, mean that the new president does not bear a resemblance with Hitler or Mussolini as much as he does Germany’s pre-WWI emperor, Kaiser Wilhelm II.” Andrew J. Bacevich in the London Spectator declared, “let me propose an alternative to those who see Trump as Hitler sans the moustache (although retaining the bad haircut). Stick with Germany, its villainous past making it an agreeable foil for us Anglo-Saxons. Rather than focusing on the Third Reich, however, consider the Second. That’s right: Donald Trump as Kaiser Wilhelm II.” Most recently, Richard Cohen notes in the Washington Post, “the Trump prototype that now seems most relevant is yet another German: Kaiser Wilhelm II. During his reign, World War I began. That war, more than the greater one that followed, continues to intrigue historians because its cause is so hard to isolate. By Armistice Day, four empires were no more, about 17 million people were dead and the stage was set for a further calamity. But what started it? There are many explanations, but one factor, certainly, was the idiotic bellicosity of the German kaiser.”

Put aside Trump for a moment. It’s worth considering what the critics take as axiomatic; namely, was Kaiser Wilhelm really as bad as all that? Or did he get something of a bum rap, taking the fall for Germany’s failure to prevail in World War I? Was the kaiser more culpable for things going wrong than Russia’s Nicholas II or Austria’s Franz Joseph?

There can be no doubting that the kaiser had a mercurial personality. Much of his tempestuous behavior has been traced by arm-chair psychologists back to his traumatic breech birth which resulted in a deformed left arm. In pictures, the kaiser is almost always holding a glove in it to disguise the injury he sustained as a baby, though it was common knowledge. In Thomas Mann’s novel Royal Highness, a sympathetic portrait of the German nobility, the protagonist Klaus Heinrich is ruler of a duchy who suffers from a withered arm.

One problem with focusing so closely on the kaiser’s personality, though, is that it tends to downplay the court system that surrounded the Prussian monarchs. The fact is that Bismarck exercised an almost tyrannical influence over his nominal masters, engineering wars pretty much when he pleased via measures such as the Ems Dispatch, which triggered the 1870 Franco-Prussian War. In addition, his unconcealed contempt for parliament and his often-underhanded maneuvers to discredit the liberal opposition ensured that German democracy remained, by and large, stillborn.

Another problem with treating the kaiser as an anomaly is that it overlooks the continuities between him and his father Friedrich III. Friedrich III was briefly kaiser in the so-called “Three-Kaiser Year” of 1888 before he succumbed to throat cancer. He has frequently been touted as someone who might have led Germany in a more liberal direction than his son, a view of history that was sedulously propagated by liberal politicians and journalists who sought to combat Bismarck’s influence.

But as Frank Lorenz Müller has observed in his book Our Fritz, this is something of a comforting fairy tale. There were more continuities between the men who ruled Prussia than otherwise. Müller thus draws numerous parallels between père and fils. According to Müller, “as had been the case with his father, William II’s infatuation with the ancient glory and romantic majesty of the German Reich went hand in hand with rather overblown notions about the position of the modern German emperor and the way he should rule. William’s attitude toward the other German princes, whom he viewed as vassals rather than allies, was utterly dismissive.”

Whether the kaiser really wanted war in 1914 is also open to dispute. The kaiser espoused militarism, but he was more symptom than cause. The belief that the time had come for Germany to seek its “place in the sun,” as the contemporary phrase had it, was widespread. All along the kaiser was more figurehead than supreme commander. Once the war began he was largely shunted to the side, as the troika of generals that the British historian John-Wheeler Bennett called HLH took over—Hindenburg-Ludendorff-Hoffmann. By war’s end, he abdicated and fled to Holland, where he puttered around his garden growing roses.

After 1918 it was the Prussian landed Junker class that undermined the democratic Weimar Republic and installed Hitler in power. In January 1933, Franz von Papen and a conservative clique persuaded Hindenburg to appoint Hitler chancellor. Had Kaiser Wilhelm not acceded to the German military’s demands to abdicate and become a constitutional monarch after 1918, the road to power for Hitler would have been blocked.

Kaiser Wilhelm’s record was at best checkered. But to make him the fall guy for everything that went wrong after 1914 is unpersuasive. Those intent on ransacking the past for figures with which to attack Trump should look elsewhere.