Donald Trump Is Redefining the Role of "Big Government" in America 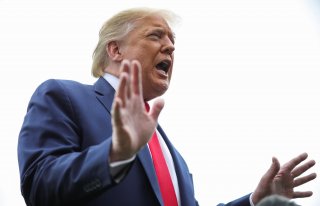 Progressive Democrats see a silver lining in the pandemic: it has ushered in an age of “big government,” and they believe it will continue well after we are all vaccinated, twice. As they see it, surely Americans have learned the need for a national single-payer health insurance system, the importance of strong safety nets, and the merit of a secure basic income. As the Economist put it, “If central banks promised to fund the government during the coronavirus pandemic, [politicians] might ask, then why shouldn’t they also fund . . . a Green New Deal?” Similarly, Bloomberg’s Noah Smith suggested that “[t]he enormous relief program could be the precursor of a big government push to fight climate change.”

Political mavens on both sides of the aisle have reached the same conclusion: Rahm Emanuel asserts, “The era of Ronald Reagan, that said basically the government is the enemy, is over,” while Steve Bannon notes that “limited-government conservatism … [is] just not relevant.” Author Zachary Karabell writes that after politicians as conservative such as Senator Tom Cotton (R-AR) have given voice to the idea “that government is responsible for the health and well-being of all citizens, it will be hard to put that communitarian genie back in a free-market, libertarian bottle.” The Economist suggests that five hundred years of history have shown that crises lead to increases in the power of the state (at least in Europe and America), and, despite initial claims to the contrary, these increases are rarely temporary. One of the reasons the new powers of the state tend to become permanent fixtures is that they raise people’s expectations regarding what the government will do and provide.

There is an old saying that if something sounds too good to be true, then it probably is. First of all, President Donald Trump’s “big government” is very different from the one President Franklin Roosevelt ushered in during the Great Depression and from President Lyndon Johnson’s Great Society. Trump’s government is largely streaming billions of dollars to the private sector, to be distributed by businesses, rather than forming new government agencies or programs, or safety nets. Thus, when the Trump administration finally got some medical supplies from overseas, it did not let FEMA hand them out according to need, but turned most over to businesses, which sold them to the highest bidder. And much of the money to support small businesses was not handed out by the Small Business Administration but turned over to banks, which took a cut and added requirements. The pandemic did not stop Trump from introducing one deregulation after another, much reducing the government’s footprint.

The great reliance on states and localities to meet the challenges posed by the pandemic means that many of the costs are falling on the parts of the government that are required to keep balanced budgets. Given the great falls in their revenues, they will be forced in the future to raise taxes and above all to curtail services, even if they get the bailout that Speaker of the House Nancy Pelosi is seeking.

As to voters’ expectations, which are hard to predict, however they may well demand—as people often do—that the nation be better prepared for the last war rather than for the next one. If this holds true, then voters will demand a much stronger CDC, FEMA, and NIH to prepare for the next pandemic, rather than worrying, say, about the globe overheating,

“In the midst of the crisis, the Trump administration declared that the federal government would pay the coronavirus health bills of any Americans without health insurance—and reimburse health-care providers at the rates paid by the Medicare health program for the elderly. That step appeared to offer at least a glancing nod toward a Medicare for All system long advocated by the Democrats’ left wing,” reports the Wall Street Journal.

“All of a sudden, the cost of a [universal basic income] isn’t nearly as big a worry as it was even a month ago. Americans across the political spectrum are calling for the government to spend very large sums of money to keep families on their feet, to keep small business afloat, and to keep the economy from collapsing,” writes Matt Zwolinski, director of the Center for Ethics, Economics and Public Policy at the University of San Diego. A New York Times headline declares: “Andrew Yang’s $1,000-a-Month Idea May Have Seemed Absurd Before. Not Now.” As I see it, this is like saying that because it rained once, after decades of drought, we can rest assured that the weather has changed. The fact that Congress took extreme measures during a pandemic threatening to kill two million Americans is no indication that Congress will vote for such outlays in the future.

Indeed, one may well argue that, given the exploding deficits and the oceans of monies the Fed has flooded the economy, the United States will surely be unable to spend more trillions on the Left’s dream agenda. The country may well have no choice but to curtail expenditures and find revenues. As Rana Foroohar wrote in the Financial Times, “Academic opinions about worrisome debt thresholds vary, but it’s clear that high and rising debt levels do dampen economic growth. . . . In time, the Fed will also have to explain how it will shrink all that debt off its balance sheet. And everyone will have to think about thrift. Enter the new age of American austerity.” Gigantic deficits may matter relatively little when the economy is in the dumps. However, when it recovers, the deficits will drive interest rates up and the government’s need to raise trillions to finance its debt will make it difficult for the private sector to raise the capital needed for economic growth.

Finally, the outcomes of the elections will matter to some extent. If Trump is reelected, then he may well choose to further disrupt the social safety nets in his quest to find ways to finance more tax cuts for individuals and corporations. If the Democrat wins, then the Republicans will suddenly remember how horrible deficits are, and—working with “red state” Democrats—will seek to block any major social reforms.

Sorry to say, there may well be a “big government” in America’s future but it is going to be big mainly in terms of the trillions it will owe rather than in the kind of programs the Left envisions.

Amitai Etzioni is a University Professor and professor of international affairs at The George Washington University. His latest book, Reclaiming Patriotism, was published by University of Virginia Press in 2019 and is available for download without charge.