Donald Trump Should Run His National Security Council Like a Boardroom 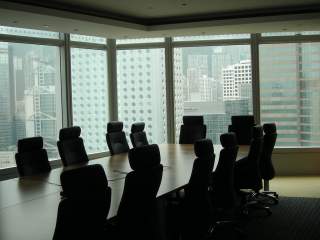 PRESIDENT TRUMP is guaranteed to face a crisis within the first months of taking office. How he and his team respond may define whether he is perceived as a successful chief executive or as an outsider who failed to translate a stunning electoral victory into effective governance.

Consider this scenario. It’s March 2017. A Japanese Maritime Self-Defense Force vessel clashes with a Chinese fishing trawler in the waters surrounding the disputed Senkaku Islands. Several Japanese personnel are killed. The Chinese ship sinks. In response, Beijing announces plans to send naval and air assets into the area to assert its territorial claims. The Japanese government declares its intent to “repel” any Chinese incursion—and seeks the reassurance from the United States that Tokyo enjoys Washington’s unstinting support.

As the news reaches Washington, the president is preparing to return to the capital from the West Coast, where he was announcing a new small-business and infrastructure-redevelopment initiative. Yet problems immediately emerge as the national-security team works to develop options for the president’s consideration. The haphazard selection process for the deputies’ positions in the key national-security departments, combined with the lack of effective direction from the White House, has made it difficult for information and options to be summarized and presented to the principals. The decision to adopt a “team of rivals” approach to the cabinet means that each principal has very different answers about how to address the emerging crisis. Already, each key secretary—defense, state and treasury—has issued contradictory statements about how the United States will respond, with the secretary of state breathing fire about coming to the aid of Japan, defense calling for caution, and treasury worried about the impact of a clash for world financial markets and the U.S. economy. Lingering disputes over whether the vice president or the national security advisor chairs the National Security Council (NSC) in the president’s absence continues to add needless tension to their deliberations and prevents the meeting from reaching any sort of consensus. Arguments erupt across the table as different principals accuse each other of cherry-picking or withholding information and trying to steer the discussion in favor of their preferred option. Distrust as to whether each cabinet principal is truly bringing all options and information to the table leads the NSC staff to bypass the normal chains of command and communication. They reach down to mid-levels of the intelligence community and directly to Pacific Command to gain raw intelligence and different operational plans, so as to be able to formulate a parallel set of options for the president, which exacerbates simmering tensions between the cabinet secretaries and the White House staff.

The president returns to the Situation Room to face not only a brewing crisis in the Pacific but also bickering within his national-security team. As the meeting breaks up to allow the president a chance to consider his choices, different cabinet secretaries jostle for the opportunity to speak to the president in private to sell him on their specific plan. Meanwhile, White House aides attempt to block these efforts in order to safeguard the president’s time. Pressured to respond, and beset by a chaotic process, the president runs the risk of making bad decisions. Over the next several days, he either arbitrarily excludes people from his circle in order to have a coherent decisionmaking process, but then is deprived of valuable perspectives and information; or he accepts a series of compromises that win acceptance around the wider table, but cannot achieve American objectives in the field. As press reports depict a U.S. national-security process in disarray, Russian president Vladimir Putin offers to use Russia’s partnership with Xi Jinping and Putin’s close ties to Shinzo Abe to broker a temporary agreement that defuses the immediate crisis. Once again, as during the 2013 crisis over Syrian chemical weapons, the diplomatic initiative is shifted to the Kremlin—and Putin’s image as a responsible statesman is enhanced at America’s expense.

GIVEN THE history of U.S. foreign-policy failures over the last several decades, this scenario is not as improbable as it might appear. All of the problems outlined in the above narrative have flared up in recent administrations: whether the national security advisor or the vice president, for instance, chairs the National Security Council in the president’s absence; whether the cabinet secretaries have at-will access to the Oval Office or must receive clearance (either from the national security advisor or the chief of staff) to see the president; whether decisions are taken in the presence or absence of the cabinet secretaries; and the most critical one: the delicate issue of people who enjoy immediate proximity to the commander in chief but are legally outside the chain of command being able to directly issue orders while bypassing the senior departmental officials. We have seen foreign governments unclear as to whether, in the absence of a presidential statement, the comments of the vice president, national security advisor, chief of staff, secretary of state or secretary of defense reflect the actual position of the U.S. government—and who has the authority to make commitments and offer deals.

The United States’ position as a global superpower means that the sheer number of geographic and functional issues are far beyond the capacity of any one person (the president) or even his immediate circle to supervise. The so-called “rule of ten and fifty” applies here: that at any given moment, the president can effectively concentrate on ten issues or so, while his senior national-security team (the national security advisor, the chief of staff, the secretaries of defense and state and treasury, etc.) can handle another fifty. Some of those issues will be enduring, while others rise and fall in importance depending on the quotidian mix of crises and opportunities that the United States faces. The national-security system that Trump creates must be agile enough to focus on what needs his personal attention while not overwhelming him with picayune matters that do not. It must also be flexible enough to allow for hundreds of other issues to be delegated to lower levels for day-to-day supervision and execution. He must have confidence that his general direction is understood and carried out by the national-security bureaucracy, without resorting to time-consuming micromanagement from the top. He must also not be seduced into creating a bloated White House operation that is too small to run U.S. national security all on its own, but big enough to cause gridlock and unnecessary turf wars.

How does the new chief executive determine what issues he will personally handle and which he wants his senior team to oversee? Most likely, drawing on his past business experience, Trump will make clear what calls he wants connected directly to the Oval Office, and which ones he expects others to handle—but be given routine updates—and which ones he expects will be solved without requiring his intervention. So how will this gatekeeper function be set up? And how will new and pressing issues not on his original list be brought to his attention?

In addition, for issues that are brought to his attention, he will have to make clear his preferences. Does he want to be presented with “the solution” to the problem? Does he want an individual to summarize the different perspectives and options and offer a list of different courses of action? Does he want a larger group to come before him, with each person given time to offer his or her perspective? And when it comes to matters requiring detailed expertise that resides in the lower echelons of government, does he want those people brought directly to him—or does he trust that senior aides who likewise may not possess sufficient background will be able to understand, process and accurately represent the situation to him?

President Trump inherits a national-security system that consists of a hodgepodge of legal requirements (e.g., to have cabinet officers who are confirmed by the Senate to administer the executive-branch departments, and to have a formal National Security Council that has statutory members like the vice president and the secretaries of state and defense and statutory advisers such as the chairman of the Joint Chiefs of Staff and the director of national intelligence) and long-standing traditions that he should have a national security advisor and a White House staff that act as foreign-policy coordinators. The extensive policy role of the vice president is also a matter of recent practice, not law. Thus, the president has a great deal of flexibility to restructure the national-security system. He is not required to follow the model of his immediate predecessors, especially if he does not believe it will help him achieve his objectives while in office.

Yet it is worthwhile to consider past precedents and assess whether any of them appeal to his preferred style of executive management.

ONE OPTION is to appoint as national security advisor someone who will serve as his vicar for national-security affairs and who could credibly be seen as the president’s alter ego in international policy—who then oversees an ambitious foreign-policy agenda and ensures that the departments and agencies of government carry out the president’s will—the Nixon-Kissinger model, in other words. This approach works best when the cabinet secretaries and their deputies are prepared to focus primarily on implementation rather than on policy formulation.