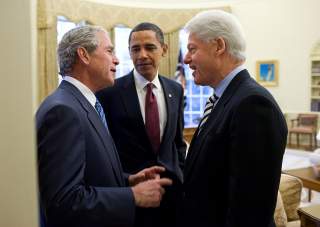 EVERY NEW administration sets out initially to distinguish itself from the previous one. This is especially true when the same party reoccupies the White House precisely because the new team must work doubly hard to set itself apart from the previous one. To wit, not only was George H. W. Bush from the same party as Ronald Reagan, but he was his vice president. Consequently, whereas Reagan generally promoted a Wilsonian worldview, the elder Bush immediately cast himself as a realist with a much more professional foreign-policy team than his predecessor. President-elect Donald Trump does not have that problem. He is coming in as a Republican after a Democratic administration. He will not have to try hard to differentiate himself from Barack Obama.

The Obama administration was defined by retrenchment and restraint. It brought two brigade combat teams back from Europe, did not intervene in Syria when it might have in 2011 and was slow to respond to Chinese island grabbing in the South China Sea. Time will tell whether this policy was wise or foolish. In any case, the Trump team, in order to show how different it is, will seek to occupy the vast space between Obama’s restraint and George W. Bush’s aggression in Afghanistan and Iraq. The danger is that, in seeking to act more aggressively than Obama against ISIS and less aggressively than the Bush administration in Iraq, Trump will, nevertheless, overcommit somewhere.

We live in a high-velocity world on a taut string, where one conflict zone in Afro-Eurasia is connected to every other one as never before, and events and cataclysms unfold at a rate never before seen in history. Thus, the price for getting bogged down anywhere is higher than it has ever been. It isn’t just geographically based conflicts that America must be wary about—Ukraine, Syria, the South China Sea and so on—it is the unconventional eruptions such as cyber attacks and pandemics that can grab an administration’s attention at any moment without warning. The media wants every administration to respond comprehensively to every outrage, but that would risk foreign-policy paralysis. While America is capable of responding to several crises at once, top decisionmakers have finite bandwidth in any given day. Thus, it isn’t one particular event that I worry about, but a cascade of them.

At the time of writing, Syria obsesses Washington. The new administration will want to do something decisive about it. But any decisive military move there comes with significant risk of bogging down the new team early, when it has little idea about what is around the corner in the wider Middle East and in the rest of the world. Syria is already wrecked. It is not altogether clear that even the removal of Bashar al-Assad will end the civil war. The Israelis, meanwhile, have finessed the situation well, so they are not at risk from continued fighting. America’s first concern must be to ensure the survival of the regime in Jordan. Protecting Jordan should be the starting point for any military-related policy response of the new Trump administration in Syria.

Looking at the bigger picture, the new administration must realize that the regimes in Moscow and Beijing, beset with economic and social problems, may not be as stable as they seem. Internal instability is, at root, the cause of their external aggression. The weaker these regimes become, the more dangerous they will be—at least in the short term. While the instinct of the new administration may be to act boldly (against China, that is), ironically, never before has restraint been so required.

In sum, the task of the new administration will be to project power in both the Russian and Chinese near-abroads to a greater degree than Obama has done, in order to set a more favorable geopolitical context for negotiations—yet without actually coming to blows with these regional powers. Easier said than done. Trump must not mimic Obama, as he became the opposite of his predecessor, Bush the younger. The pendulum must come to rest in the middle—not swing to the other extreme.

Robert D. Kaplan is a senior fellow at the Center for a New American Security and the author of Earning the Rockies: How Geography Shapes America’s Role in the World.