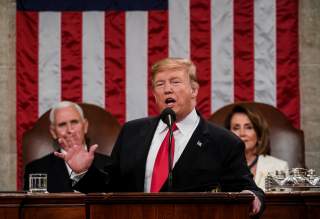 President Donald Trump embraced convention Tuesday night in his State of the Union address. Fresh off the longest government shutdown in U.S. history, Trump deployed the tried and true script of unity, greatness, and American exceptionalism. Faced, as Bill Clinton was after his first midterm election, with an adversarial House, Trump took a page from the forty-second president’s playbook: he triangulated. “This Is Not Normal” has become a refrain on the Left in the Trump era. Donald Trump took every effort to present himself as the new normal.

To the consternation of some of his most prominent critics, the president presented himself as a moderate steward of a roaring economy and a bulwark against America’s excesses: open borders and abortion rights fundamentalism. “An economic miracle is taking place in the United States—and the only thing that can stop it are foolish wars, politics, or ridiculous partisan investigations,” Trump said.

Trump’s jabs at Robert Mueller fell flat, but his scattered statistics, regular invocations of American greatness, and adept hijacking of identity politics drew cheers from even his opponents. As others have noted, a chamber that has seen some of the most celebrated rhetoric in American history rang with the mindless chants of cheap nationalism.

Like Richard Nixon in 1972, Trump seems to be preparing to run for re-election as “The President.” Trump told Congress and the nation: “Victory is not winning for our party. Victory is winning for our country.” A CBS instant poll after the address showed viewer support of the speech at seventy-six percent, though viewers of the speech also seemed to be mostly Republicans.

Trump pulled out all the stops, invoking America’s storied past, and by extension, implying he is a natural part of the country’s long journey. “In June, we mark 75 years since the start of what General Dwight D. Eisenhower called the Great Crusade—the Allied liberation of Europe in World War II,” Trump said, before recognizing three American World War II veterans. Astronauts, orphans, and law enforcement officers were also regularly summoned from their seats and applauded by the roomful of politicians in what is now a seemingly permanent segment of this emotive annual civic ritual.

Some foreign-policy realists and libertarian-leaning sympathizers cheered the address, hearing a tough-minded enunciation of the administration's prerogatives on Afghanistan and Syria.

“Tonight, the President took a bold and praiseworthy step forward in winding down America’s costly ‘endless wars.’ For far too long the wars in Afghanistan and Syria have muddled along at great cost and risk without a viable strategy,” William Ruger, vice president of research and policy at the Charles Koch Institute, said. “It is time for greater realism and restraint in our foreign policy, and this [speech] is a positive move in that direction.”

Buttressing his recent tack in foreign affairs, Trump told the country that “As a candidate for president, I pledged a new approach. Great nations do not fight endless wars.” Great nations that want to remain great nations certainly don’t. Yet moments after pitching his administration’s “constructive talks” with the Taliban, the president tried to ham-handedly link Iran and Pittsburgh’s synagogue shooting, with Holocaust survivors following close behind for anyone who wasn’t getting the point. Trump also continued the bipartisan routine of idiotically celebrating the pouring of more money into the bottomless belly of the Pentagon.

Trump’s address drew attacks from two quarters: immigration hawks—most prominently Ann Coulter—who claimed he did not go far enough, and foreign-policy realists who lobbed the same complaint. But Trump can credibly ask the silent majority of Americans (if such a thing still exists): where else are you going to go? Indeed, a top aide to a senior Democratic senator has long confessed his darkest nightmare: that Trump, a morally questionable figure presiding over a healthy economy and an era of relative peace, is the political heir to President Bill Clinton—and on his way to a second term.

Gil Barndollar is the director of Middle East Studies at the Center for the National Interest and Military Fellow-in-Residence at the Catholic University of America’s Center for the Study of Statesmanship.