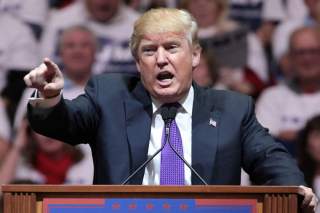 What new outrage would Donald Trump serve up at the final presidential debate? For over a year now, the nation’s commentariat has feasted on the Trump spectacle. The Republican nominee is not only great for ratings, he’s also a convenient prop for pundits who want to show how truly moral, loving, and all-American they are. They’re horrified by Trump, and you should admire them for that.

Trump delivered once again: there, on the stage at UNLV, he said he couldn’t agree that the outcome of the election was fair until the election had actually been held. “Sir,” moderator Chris Wallace asked, will you “absolutely accept the result of this election?” Trump replied: “I will look at it at the time. I'm not looking at anything now. I'll look at it at the time.”

Wallace, like all right-thinking Americans, was aghast. “But, sir,” he implored, “there is a tradition in this country—in fact, one of the prides of this country—is the peaceful transition of power and that no matter how hard-fought a campaign is, that at the end of the campaign that the loser concedes to the winner. … Are you saying you're not prepared now to commit to that principle?”

Hillary Clinton was perfectly forthright in her response: “Well, Chris, let me respond to that, because that's horrifying.”

Questioning the integrity of the voting process is simply unconscionable. Except, of course, when people other than Trump do it. How many Hillary Clinton supporters, after all, would insist that George W. Bush’s election in 2000 was illegitimate, “rigged” by the Supreme Court? And haven’t Republicans and Democrats been hurling accusations at one another for years now of voter fraud and voter suppression? Haven’t Trump’s critics conjured the specter of Russian attempts to affect the outcome of the election—even, perhaps, by hacking into the voting machines themselves?

Trump is a seriously flawed candidate who has one great virtue: he has forced American politics to look itself in the face. Our elections almost certainly are not rigged in the literal sense; but they are illegitimate in the eyes of millions of Americans. Democrats see Republicans as illegitimate—whether because of the way Bush was elected or because of the way Trump has campaigned—and Republicans see Democrats as illegitimate, while millions of Americans not closely tied to either party believe the whole game of politics lacks legitimacy. Whom is Chris Wallace kidding?

Our political institutions have been bleeding away their legitimacy since at least Watergate, and probably long before that. This is alarming to our politicians and the pundits who publicize them, but in the last 20-odd years the most dangerous abuses we have seen in American government occurred, in fact, when a president enjoyed maximum legitimacy: the legitimacy that descended on George W. Bush after the 9/11 attacks. A catastrophic war in Iraq and the routinization of torture as an element of U.S. policy were just two of the consequences. If that’s what legitimacy gives us, we’re better off without it.

But won’t Trump’s supporters run riot if he doesn’t concede? Won’t they go on those lynching sprees that we all know they’re just dying to get started on? This is less a legitimate fear than an expression of the elite’s—and the left’s—own paranoia. It’s exactly parallel to the fantasies some on the right had indulged in of blacks running riot if Barack Obama had lost in 2008.

Clinton last night warned that Trump “incites violence…he applauds people who are pushing and pulling and punching at his rallies.” Trump has been as blunt about this as he has been about everything else. But it’s worth noting that the political violence in the headlines the past week has not been perpetrated by Republicans but directed against them: a GOP campaign office in North Carolina was bombed, while bricks were thrown through the windows of another in Indiana. The problem of violence in American politics is not primarily a Donald Trump problem.

Short of violence, other gross incivilities seem to have become increasingly common in American politics lately. Self-appointed student Thought Police stifle unfashionable speech on campus. Right-wing Christians and homosexual-rights activists harass one another with unnecessary laws while they squabble for the bragging rights that come with claiming to be “oppressed.” Gun-control advocates have joined anti-abortionists in labeling their opponents as virtual accessories to murder, while gunowners and women are told that their rights will vanish forever if the wrong party gets into office—or gets to make the next round of Supreme Court appointments.

Hillary Clinton’s closing statement last night signaled just how unseriously she and the rest of American’s political and pundit class takes all of this: “I'm reaching out to all Americans,” she said, “Democrats, Republicans, and independents—because we need everybody to help make our country what it should be, to grow the economy, to make it fairer, to make it work for everyone.” Such happy-talk is not conciliatory; it’s merely evasive. It elides the very serious political differences that Americans have with one another, differences which, if not expressed openly by contesting political parties, will break out into other, less controlled forms.

Trump, on the other hand, has helped to make clear exactly where Americans’ divisions lie and how intense they are. This is something that every one of his Republican rivals this year failed to do—and it’s why he won the nomination. Trump, the most unorthodox Republican in terms of his policies, was the one candidate who represented how a plurality of Republican voters actually feel: angry, betrayed by their own party’s failures, and totally opposed to Democratic administration, above and beyond any individual “issue” or cluster of issues.

This might all be regrettable—though again, one might think twice about bipartisan causes like the Iraq War—but it’s the reality of politics today, and whether it’s for better or for worse, it has to be addressed openly and honestly. That’s precisely what most politicians are incapable of doing, and it’s what Trump has done.

That won’t make him president. Trump’s poll numbers didn’t improve after his relatively strong performance in the second debate, and his performance last night will not have won him a single vote that he wasn’t already getting. Trump seemed like the amateur he is, up against the consummate polished, status quo politician that is Hillary Clinton. She calmly and icily sliced him to ribbons—and she would have done the same to any Republican who could have won the nomination. (Just imagine: low-energy Jeb? Boyish Rubio? The inhumanly aggravating Cruz? She would have slaughtered them just as gleefully as Trump.)

But Trump has shaken up American politics in much the way that Barry Goldwater and George McGovern once did. Both parties will have to contend with the divisions and passions he has brought to the fore, no matter what happens on Nov. 8. And if more conventional politicians cannot honestly deal with such things, we will see more unconventional figures like Trump in the future.