Donald Trump vs. Hillary Clinton: We Still Have No Idea Where They Stand On the Issues 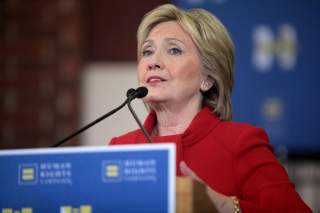 Where to begin? Normally after a debate we witness a tussle over who won, and last night was no different. Instant polls said Sec Clinton won (true) and the Trump supporters disagreed (typical.) But more to the point: America lost.

Last night we saw more of a debate than usual. Moderator Chris Wallace did a better job keeping the circus inside the tent. He tried to keep the focus on issues, but soon the candidates got down to business. “Liar.” “Misogynist.” “Crook.” “Cheat.” We get it. Both of the candidates are horrid.

Prior to the debate, the media buzzed on bated breath to see if Clinton and Donald Trump would shake hands (they did not.) Endless panelists discussed the importance of this and why the two candidates’ families chose to seat themselves rather than do the traditional meet and greet. You see, the handshake was critical.

Meanwhile, our brave men and women, the best among us, tuned in from our country's longest war to see what our future president might have planned for them. Not only did neither candidate mention the two American soldiers who died there this week, they did not even mention the word “Afghanistan.” Not once. This continued the streak from the last debate where neither candidate bothered mentioning a war ongoing since 2001. And the streak would have been three debates had Clinton not uttered the word when criticizing Trump’s NATO policy during the first debate. Thus, 10 thousand brave men in women in harm's way in an aimless war have no earthly idea what their future holds.

Moving on to our veterans. Another report surfaced this month about vets dying while waiting for VA hospital treatment. Despite that, we did not hear our next president explain how they plan to improve the VA.

This went on and on for ninety minutes. Trump held it together for the first thirty minutes, then the little guy tuckered out. In a bizarre way, sympathy was in order. Clinton baited him over and over again with highlights from her Trump oppo research file. Remember in 2000 when Vice President Al Gore kept baiting President Bush with a reminder that Bush had suggested privatizing Social Security? Or the “lock box?” This year Clinton had a different repertoire from which to choose. “He insulted a former Miss Universe, Alicia Machado, called her an eating machine.” Yup.

We did hear a little policy, though it was fleeting. The candidates’ discussion of immigration broke down into a session on Putin, Wikileaks, etc.  Trump praised Putin and denied Russia is behind the hacking, despite a unanimous intelligence community finding saying otherwise; Clinton brushed off a question about the Clinton Foundation pay-to-play scheme by blaming Russia for hacking.

Then, the candidates played footsie with ISIS policy. Trump pinned a healthy dose of the blame for our current predicament on Clinton’s poor judgement for surrendering Iraq. True. Then he criticized President Obama for blabbing about the Mosul operation too much and alerting the ISIS leadership to the fact that they were in our crosshairs (that is not why Iraq wanted to retake Mosul, but whatever.) Trump seems unaware that, even in the extreme case of D-Day, even though the assault was secret, Hitler was under no illusion that the allies were coming for him.

When the debate turned to the economy, the candidates mixed magic with nostalgia. Clinton proposed a smorgasbord of liberalism, complete with free college, higher taxes, no national debt and 10 million jobs. The candidate for the party of small government proposed a parade of Keynesian stimulus. Then, Clinton accused him of supporting “trickle-down economics.” The 80s called; they want their talking point back. Will one of her campaign staff please explain to Clinton than no millennial knows what she is talking about?

Then, the fun stuff.

In answering a question about whether he would accept the results of the election, Trump said, “I will keep you in suspense.” Really? That stands in stark contrast to Jefferson: ““But every difference of opinion is not a difference of principle. We have called by different names brethren of the same principle. We are all republicans. We are all federalists.” Jefferson’s magnanimous words helped unite a country that had almost suffered a Constitutional crisis after the election of 1800. Of course, Jefferson won, but… The nasty election between the Federalists and Republicans had to be decided by the House of Representatives. President Washington had made a big deal of the peaceful transfer of power and his Farewell Address remains a document every American should read.

But hopping back in our DeLorean to the debate we got to hear a Clinton (!) lecture on denigrating our democracy, and, in closing, Trump called Clinton, “A nasty woman” – a dog whistle that probably will not attract many women voters.

After the debates the network commentators reached full nuclear meltdown because Trump called drug dealers “bad hombres” during the debate. Insensitive? Sure. Far more likely was that it was just your typical Trump word salad. More importantly, the network meltdown missed the point. Who cares that a man who bathes in offensiveness every day called someone an “hombre?” The comment came up during an immigration discussion—his signature issue. Immigration rightfully animates the American people, yet the entirety of his plan is to build a wall and deport “bad hombres.” The commentators seemed rather unconcerned about this.  Americans demand immigration be fixed, yet we have no idea what the candidates have planned.

These same commentators were the ones all lathered up about the handshake before the debate. Because the circus just will not stop everyone involved who seem not to notice that voters crave policy solutions. American voters do not want change from Obama because he is a bad person or because he said bad things. Voters want change from his policies. Thus, voters need to see that how the candidates would change things.

The middle-school cafeteria name-calling may entertain, but it does not answer the mail on where the country will be headed the next four years. The Medicare trust fund runs dry in 2026 as will Social Security around that same time. Only Clinton had something of a response, and it is half-baked and unworkable: raise taxes.

Trump continued his theme of a rigged election. Of course election fraud happens every year, but to think it could happen on a large enough, industrial scale to account for the yawning margins likely on November 8th should make you giggle. That, Trump’s insidious nonsense about not accepting the results of the election, and his hombre comment will likely greet you in the news today.

But the real lesson from last night’s debate is that neither of these candidates bathed themselves in glory, and we still have no idea where they stand on the issues.