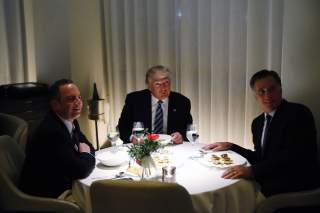 With Sen. Orrin Hatch’s announcement that he will not run again in 2018, Mitt Romney is on the verge of gaining his revenge against President Donald Trump. Until now, the Republican establishment has lacked a figurehead behind which it could mobilize against Trump. If Romney runs for Hatch’s position, he will be poised to challenge Trump in the 2020 Republican primary and to seek to rejuvenate the GOP establishment. Having failed twice, he may believe that the third time is the charm in running for the presidency.

In declining to run again, Hatch, who has served since 1977, the year Jimmy Carter became president, rebuffed Trump’s pleas to seek a fresh term. Polls indicated that 75 percent of Utahns did not want him to run again. In late December, an editorial in the Salt Lake City Tribune blasted his “utter lack of integrity” and sarcastically named him “Utahn of the Year.”

But Trump had every reason to hope that Hatch would return to the Senate. Romney, whom he humiliated in December 2016 by dangling the prospect of becoming Secretary of State, then standing by passively as Kellyanne Conway made her disdain for him palpable, is the foremost critic of Trump in the GOP and a potential vote for impeachment. Coupled with Doug Jones’ win in Alabama, the Romney candidacy is bad news for Trump.

At a minimum, a Senator Romney would offer a beleaguered Republican establishment the opportunity to regroup. Much depends on Trump’s own fortunes over the next year. In a scathing cover story in the January/February issue of the American Conservative, the historian and editor Robert W. Merry takes a pessimistic view of the Trump presidency. Merry diagnoses a “governing vacuity” at the core of his presidency. While Trump assembled a political coalition, he has been unable to create a governing one. Merry argues that figures such as Richard M. Nixon and Bill Clinton were capable of a sophisticated political calibration that “seems outside Trump’s capacity.”

According to Merry, “Trump seems to lack the strategic acumen and powers of concentration required to craft a coherent political strategy made up of intertwined initiatives and actions.” Instead, he appears to spend four to eight hours a day watching television in addition to golfing or tweeting ludicrous attacks on everyone from Huma Abedin to James Comey to Pakistan. In his fervor to decry his real and perceived enemies, Trump resembles a machine gun spinning around wildly that has everyone in its vicinity dodging for cover. Indeed, when it comes to Trump’s more bellicose statements, the Wall Street Journal editorial page notes today, he is “paying a considerable political price for that excess with an approval rating below 40% less than a year into his term.”

In foreign policy, Trump seems to be gyrating wildly as well. His administration, which entered office declaring that it would avoid becoming enmeshed in Middle East wars, is now taking a very hardline stance on Iran. Today, UN ambassador Nikki Haley announced, "We must not be silent. The people of #Iran are crying out for freedom. All freedom loving people must stand with their cause." The rhetoric comes straight out of the George W. Bush administration. But what will Trump do if the regime in Tehran launches a bloody crackdown? Stand by passively as did Obama in 2009 during the Green Revolution or intervene? So far, he appears to be conducting nothing more than a show biz presidency. Consistent with this ethos, Trump, in the case of North Korea, has exceeded anything that Bush declared. For good measure, he is also denouncing Pakistan as an ingrate nation and signing off on sending lethal weaponry to Ukraine.

If this keeps up, Romney, who has always been a hawk, may find that he has little to quarrel with Trump about in foreign affairs. But domestically, he will. Romney is the antithesis of Trump—a genuinely successful businessman who pioneered a version of ObamaCare in 2006 as Governor of Massachusetts. Romney and Trump have already traded brickbats in the past. Romney called Trump a “fraud” and was in turn alleged to have “choked like a dog” in his run for the presidency in 2012. As the Washington Post’s Aaron Blake points out, Romney could become a real headache for Trump: “Romney wouldn't necessarily feel the need to temper his opposition to Trump in the Senate. Utah is about equally as anti-Trump as it is pro-Romney. Trump did win the state, but that victory owed almost entirely to the state's Republican lean. Polls there showed Trump's favorable rating as low as 19 percent and his unfavorable rating as high as 71 percent, largely thanks to Mormons disliking him.”

2018 is not beginning well for Trump.