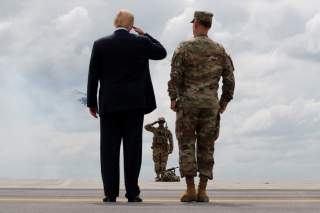 A $743 billion annual military budget is a lot of money. Characterizing it as lacking in any way understandably raises eyebrows. But bipartisan agreement about what the Pentagon minimally needs for the year ahead should signal that President Donald Trump’s latest budget merely keeps the military treading water.

Even as Trump touts his support of the armed forces, his defense budget does little more than continue readiness repairs. For the third year in a row, the White House request does not rebuild the military or robustly provide the resources to execute the defense strategy.

No matter who won the presidency, Congress stood poised in 2017 to begin mending accumulated damage to readiness after the defense budget had lost $550 billion in buying power below inflation since 2012, leading to abysmal preparedness rates for Army brigades, Navy ships, and Air Force squadrons. In response to this readiness crisis, Congress budgeted $700 billion in 2018 and inflationary growth of $716 billion in 2019 to get the force healthy, an effort that has delivered real results.

Despite the fact that his own 2018 budget was $100 billion lower than what Congress passed, the president continues to take credit for this long-overdue spending boost. In reality, this bipartisan consensus was built through years of hard work by the late Sen. John McCain, Rep. Mac Thornberry, and a long list of similarly concerned lawmakers. Congress received ample help from former Secretary of Defense Jim Mattis and the joint chiefs, who not only called for repairing readiness, but also testified repeatedly that both executing the old defense strategy and rebuilding the military would require 3 to 5 percent annual real growth in spending.

A few months later, the administration released an ambitious new strategy focusing on Russia and China that garnered bipartisan plaudits. This signaled a sea change in American defense planning by continuing all existing counterterror missions while also preparing for long-term competition with China and Russia. Despite the tectonic strategic shift, the administration’s defense budget requests remain unchanged. Acting Defense Secretary Patrick Shanahan’s claim that the 2020 defense budget would rank as a “masterpiece” in reflecting the new strategy is a punchline on Capitol Hill.

For the second straight year, the Pentagon will not receive more buying power. While Mattis, Sen. Jim Inhofe, and Rep. Thornberry secured a floor of $750 billion for 2020 defense spending, the real 2020 budget will be around $743 billion, excluding inappropriately included border wall funding. That’s basically just growth with inflation from 2019—1 percent real growth at best—and it continues a flat defense spending trajectory for years to come. This is the cost to restore the readiness of current forces. Worse yet, that flat trajectory is actually a decrease of about three percent, as the Pentagon uses rosy estimates about pay raises and health care cost growth. That flat trendline does not accelerate the timeline for expanding missile defenses or building a 355-ship Navy, two of the president’s military priorities. While the budget will set a record in research and development investment, it simply holds the line on modernization of the weapons across the services. It does not rectify the $116 billion shortfall in dilapidated basing and military housing. Nor does it invest the billions necessary to prepare installations for new adversary missiles or the slow creep of climate change. The administration has also touted bogus “savings” to cover up its funding mismatch, but even the president’s withdrawals from Syria and Afghanistan will save only single-digit billions.

A flat budget only treads water—even if it’s $743 billion—and continues the familiar approach of punting today’s problems to the future.

Independent analysis by the National Defense Strategy Commission indicates that the armed forces require more people to relieve overworked troops, additional advanced weapons, and smarter ways of using them to carry out the defense strategy with acceptable risk. An analytically rigorous defense budget investing in both warfighting and competition would show real growth year over year to make up for the hangover of lost time and money caused by sequestration in 2013.

If the White House matched what its last defense secretary said he needed, and the independent commission confirmed, three to five percent annual real growth would mean a 2020 request that is $20 to $50 billion higher. Over the next five years, it would spend between $300 and $600 billion above inflation, a true analogue to the buildup of the 1980s. And, as in the 1980s, a contemporary mini-buildup would not last forever. About five years of real growth would not only render the military much healthier but would also instantly boost the credibility of nonmilitary American power.

The Pentagon cannot spend its way out of the challenges it faces. But failing to spend enough and in the right places will leave the American military strategically insolvent. In the absence of tradeoffs about which missions to jettison or a sizable five-year investment in defense above inflation, the military simply cannot execute the strategy. President Trump’s 2020 budget request will not be able to hide this truth.

Rick Berger is a research fellow at the American Enterprise Institute and previously worked at the Senate Budget Committee. Mackenzie Eaglen is a resident fellow at AEI.