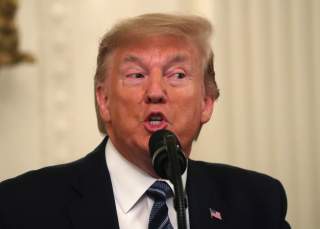 For the time being, the coronavirus crisis seems to have provided an opportunity for a small rapprochement in U.S.-China relations. Perhaps because he feels under pressure to downplay the seriousness of the pandemic, President Trump has been effusive in his praise for Beijing’s handling of the spread – evidence, he suggests, that the virus can be brought under control. In return, China has agreed to accept help from a small number of U.S. health experts. But as the crisis begins to be felt more acutely at home – and as the November election draws closer – there is every chance that Trump will revert to form by blaming China for the coronavirus in hopes of deflecting criticism of his administration.

Some undiscerning commentators have already seized upon the opportunity to assign blame to China. Jesse Watters and Rush Limbaugh, for example, have both suggested that the coronavirus began as a result of Chinese people eating “raw” bats and snakes. Limbaugh has even gone so far as to suggest that the virus might be a biological weapon developed by the Chinese government – a bizarre conspiracy theory that has been repeated by Senator Tom Cotton (R-Ark.) and is proving difficult to fully dispel.

These crass and racist attacks on China have no basis in fact. But more sophisticated analysts have sought to criticize China from a different angle. Rich Lowry, for example, has written that the spread of the coronavirus “demonstrates a downside of globalization and shows the importance of borders. It is an object lesson in our overdependence on a China that is dictatorial, dishonest, and poorly governed.”

From this view, the Chinese might not be to blame for starting the coronavirus pandemic, but their repressive and corrupt system of government has certainly made matters worse – not just for China, but for America too. Because Beijing cannot be trusted to do a better job of managing the spread of contagious diseases in the future, it makes sense for the United States to reevaluate its close economic relationship with China. For decades, U.S. leaders have been in thrall to the benefits of economic interdependence; the spread of the coronavirus illustrates that Trump’s vision of shutting out the rest of the world might not be such a bad idea.

An alternative view is that the coronavirus crisis highlights the need for greater international cooperation, not less. As the two most powerful countries in the world, the United States and China must be at the heart of collaborative efforts to tackle global problems. Instead of curtailing international trade and foreign travel – questionable prophylactic measures, to say the least – the world’s governments ought to ramp up cooperation in the areas of disease prevention and control. The current system of responding to such crises is far from perfect, but the proper response is to implement policies aimed at making things work better.

For the time being, Trump seems to understand that this particular global problem requires cooperation and coordination across borders. His administration is working with the World Health Organization (WHO), has dispatched health officials to assist foreign governments like China’s, and has allocated at least $1.3bn toward efforts to stop the coronavirus from spreading overseas. Importantly, the President has mostly refrained from blaming any international actor for the present difficulties facing Americans.

But Trump’s patience with a “globalist” approach to the coronavirus might not last long. After all, it is decidedly out of character for this president to place much faith in international institutions, foreign governments, and the scientific establishment when it comes to making public policy. On the contrary, his modus operandi is to reject any suggestion that the United States needs the help of other countries to keep its people safe. In Trump’s mind, the outside world is the source of America’s problems – it is not a place to go in search of solutions.

Trump’s tendency to lash out at foreign governments is something that Beijing is all too familiar with. Before and after becoming president, Trump has blamed China for a raft of America’s national afflictions, from climate change to job losses. What is more, his repeated exercises in “China-bashing” have mostly played well with domestic audiences. Quite understandably, neither Republicans nor Democrats are in a mood to constrain Trump when Beijing is behaving so badly in Xinjiang, Hong Kong, and with regards to trade and investment.

This means that, while the President might be tolerating a technocratic and cooperative approach to the coronavirus for the time being, nobody should be surprised if Trump reverts to form by looking to scapegoat China for the domestic fallout that results from his administration’s bungled handling of the crisis. The attacks on China will come especially thick and fast if the economic situation continues to deteriorate ahead of Trump’s bid for reelection in November.

It is already the case that Trump has sought to deflect criticism onto others, with the Obama administration and the Federal Reserve being among the first to incur the President’s wrath. But it would be a departure from past practice if Trump did not assign a large portion of the blame to foreigners – with China the most likely target in the current circumstances.

Using the coronavirus as a stick for beating China would not be good foreign policy. Most importantly, antagonizing Beijing would hamper international efforts to deal with the virus. Worsened relations in this area would also reduce the likelihood of a comprehensive settlement of the US-China trade dispute. In the long term, a spiraling dispute over the coronavirus might also push Beijing to develop its own international architecture for dealing with global health issues.

Trump, however, can be relied upon to prize his own political survival over any regard for long-term U.S. interests. This is the lesson of his trade war, after all. And with China already playing its own version of the blame game, it is only a matter of time before Trump returns fire. The alternative would be for Trump to accept responsibility for what takes place inside America’s borders. It is difficult to imagine such a thing from this president.