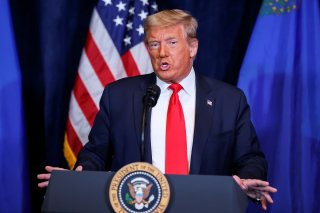 Judging by the renewed spike in COVID-19 infections and by the stock market's recent swoon, it would seem that the gods have decided to rain on Donald Trump’s economic parade just when he least needs that to happen.

Less than a week before the election, when Mr. Trump would like to seize on today’s strong U.S. GDP numbers to trumpet the success of his economic policies, the gods are causing stock prices, Mr. Trump’s favorite economic indicator, to tumble. They are doing so by heightening fear in the markets that the U.S. is all too likely on the cusp of a second and more vicious wave in the pandemic. They are also doing so by sowing doubt that agreement between Congress and the White House on a second stimulus package will occur anytime soon.

Today’s GDP numbers showed a 33 percent surge in GDP in the third quarter of the year, or by far the largest such increase on record. Judging by Mr. Trump’s pre-announcement on the stump of the strongest of economic rebounds, in the closing stage of the campaign he can be counted on to present these third-quarter numbers as a vindication of what he is claiming to be his superb handling of the economy.

He will do so without mentioning that in the previous quarter GDP declined by 31 percent or by an amount that had no parallel even in the Great Depression. That explains why despite the strong third-quarter bounce, US output today is still well below its pre-pandemic peak and why around 11 million Americans still remain unemployed.

The recent sharp stock market slump will now make Mr. Trump’s task of selling today’s GDP numbers as a sure sign of a sustainable V-shaped economic recovery all the more difficult. Over the last three days, the US stock markets has lost around seven percent in value thereby wiping out almost four months of gains. This hardly is a market vote of confidence on the sustainability of the recent economic recovery. Rather, it would seem to be a clear sign that far from buying Mr. Trump’s V-shape economic recovery story, the market is now beginning to believe that the U.S. could have a double-dip recession.

Two factors seem to be fueling the market’s growing doubts about a sustainable V-shaped recovery. The first is the market’s growing concern about a vicious second wave in the pandemic not only in the United States but also in Europe. The second is that political developments in the aftermath of the election could delay the passage of the second stimulus package till February or until a new Congress is in place.

Unfortunately, it would seem that the markets are justified in being worried about a second wave in the global pandemic. Already in Europe, a sharp spike in COVID-19 infections has induced Germany, France, Italy, and Spain to begin rolling back in a major way their earlier easing of their COVID-19 lockdowns. Meanwhile, in the United States, the rate of Covid-19 infections is already running at a rate above its previous peak while U.S. health experts are now warning us of a very dark COVID-19 winter.

The markets would also seem to be justified in fearing that the further delay in the adoption of a second stimulus package is increasing the chances of another leg down in the U.S. economy. It is not simply that, as Fed Chairman Powell keeps reminding us, the U.S. economic recovery is already showing clear signs of running out of steam. It is also that if it does turn out that we have a dark COVID-19 winter, it must only be a matter of time before the U.S. follows Europe in rolling back the earlier lifting of the COVID-19 induced lockdown.

Over the past four years, Mr. Trump has never tired of pointing to the strong stock market as the key measure of what he keeps claiming to be his successful economic stewardship. In the closing days of the election, it is more than likely that he will not be talking much about the stock market in the hope that the electorate will not make the connection between the stock market and the U.S. economic outlook. We will not have long to wait before finding out how good is the memory of the U.S. electorate.