Don't Be Fooled—Ukraine Is Not a Frozen Conflict 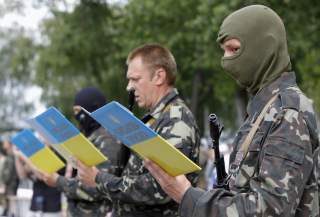 With the North Korea and Iran pots both simultaneously coming to a boil, it’s naturally hard for national security specialists to take on any more complex and dangerous issues. Yet Syria and Yemen demand major attention as human rights catastrophes. Did we forget that U.S. troops are still somehow mired in Afghanistan – “the forever war”? Then, there is the seeming possibility of yet another Ebola outbreak in central Africa. Also never mind that the Taiwan issue could blow sky high at almost any moment and that volatile questions surrounding the South China Sea are very far from resolved.

By contrast, Ukraine looks rather sleepy – just another frozen conflict, right? Wrong. There is a strong case to be made that the Ukraine issue far eclipses nearly all the above conflicts with respect to dangers to U.S. national security. Consider the following scenario that is not especially far-fetched: new Javelin anti-tank missiles from the U.S. suddenly give Ukrainian forces the edge in their “anti-terrorist” campaign against breakaway eastern Ukraine. As a result, Moscow retaliates against Kiev by launching massive air strikes against Ukrainian forces that kill numerous American military advisors. The U.S., in turn, responds by moving major naval forces into the Baltic and Black sea areas. Russia then answers this challenge with the rash and reckless sinking of a U.S. destroyer in each of the two seas with its new, hypersonic Khinzhal air-launched anti-ship missiles. In response, the U.S. employs B-2 and B-1 strategic bombers to deliver punishing blows against all major Russian naval bases causing major ship losses to the Russian Navy. At this point in the escalation cycle of ever increasing violence, the Kremlin makes a desperate call, opting to “escalate to deescalate,” and launches a limited number of nuclear strikes against tier two American and European cities. Berlin and Washington are spared (at this stage), but Kiel and Charleston are not, unfortunately. Any old-timers familiar with the movies War Games or The Day After can readily imagine the rest of this miserable story [несчастная история].

In light of this, it is good news that German Chancellor Angela Merkel and Russian President Vladimir Putin met in Sochi recently to discuss many issues, but also to prevent the Ukraine situation from melting down. However, this one bright spot comes against a steady drumbeat of bad news over the last several months. In mid-May, the Associated Press reported the worst outbreak of deadly skirmishes in eastern Ukraine so far this year. A recent analysis in the Russian press suggested that a major Ukrainian offensive against the separatists might be imminent: “In the beginning of June, the Ukrainian Army will begin a blitzkrieg against the Donbass [В начале июня украинская армия начинает блицкриг против Донбасса].” Then, there was the recent lead article in the Russian newspaper Nezavisimaya Gazeta that discussed a mysterious video that had surfaced depicting attack helicopter (Mi-24) flight training by Ukrainian forces in the vicinity of the Donbass. “A question arises: why are Ukrainian military personnel undertaking combat drills in the area of the Donbass, but not using their native language? [возникает вопрос: зачем украинским военным отрабатывать боевые задачи в районе Донбасса, используя для общения не родной язык?]” As English language communication is used by these personnel in the video, the obvious allegation made in the Russian article is that foreign (NATO) advisors are near the front lines in Ukraine and are training Ukrainian forces in sophisticated military tactics such as coordinating air and ground attacks.

Meanwhile, it is reported that the much-discussed Javelin anti-tank missiles have already been delivered to Ukraine per the Trump Administration’s policy reversal of the Obama Administration’s prohibition on lethal aid to Kiev. This was not missed in an early April survey of the Ukraine situation in the Russian military newspaper Voennoye Obozrenie. Hinting at the likelihood of near-term escalation, the article ran under the headline: “Kiev Has Not Left Moscow Any Choice” [Киев не оставил Москве выбора].” This article suggests that the 210 Javelins delivered to Ukraine “are capable of seriously altering the balance of forces in the Donbass theater of military operations [способных серьёзно изменить соотношение сил на Донбасском ТВД].” The article notes Ukrainian special forces operations against Crimea going back a couple of years, but the focus of this piece is actually on the evolving maritime situation.

In particular, there is evidently significant worry concerning a Russian fishing boat “North” [Норд] seized by Ukrainian forces on 25 March. Calling for a strong reaction, the author asks the reader to “imagine for a moment the scenario in which a Chinese fishing seiner was seized by the Navy of Vietnam … [Представьте себе на минуточку сценарий, при котором ВМС Вьетнама задерживают китайский рыболовный сейнер].” Rather disturbing, moreover, is also a reference to a “weekly (but sometimes more often) flight by an American strategic UAV MQ-4C that conducts a reconnaissance flight for many hours in the airspace close to the line of contact in the Donbass [американский стратегический БПЛА … RQ-4B еженедельно (а иногда и чаще) проводит многочасовые разведывательные полеты в воздушном пространстве близ линии соприкосновения на Донбассе].”

Another Russian assessment that dates from March 2018 from the same military journal is similarly dark and bellicose. This second piece was published under the title: “The Quiet Americans in Ukraine” [Тихие американцы на Украине]. This piece details the February 2018 visit of a senior American defense expert, who formerly led the prestigious Defense Advanced Research Projects Agency (DARPA) during 2001-2009 to Ukraine, where he was apparently to serve as a consultant-observer to the Ukrainian state weapons development corporation. According to this rendering, this individual has been charged with the creation of the “Ukrainian DARPA.” Not surprisingly, Moscow is rather perturbed by the increasing level of American security-oriented support for Kiev. This Russian analysis asserts: “It’s hardly a secret that Washington is extremely interested in reinforcing the military potential of contemporary Ukraine, which they see as the sworn enemy of the remainder of Russia and the main check on the process of the strengthening of the eastern Slavic historical enemy of the West.” [Не секрет что в Вашингтоне крайне заинтересованы в усилении военного потенциала нынешней Украины, в которой видят заклятого врага остальной России и главный тормоз на пути укрепления исторического восточнославянского врага Запада.] The article suggests that Ukraine has become a “laboratory” for the testing of weapons and tactics against Russia. The analysis concludes that the visit of this high-level American defense expert, when taken together with the transfer of the Javelin anti-tank missiles, suggests “… the conclusion that the American stake in the further buildup of Ukrainian military power, confirms in particular the long-term confrontation with Russia …” [следует логический вывод о том, что американская ставка на дальнейшее наращивание военной мощи Украины, заточенной ими на длительную конфронтацию с Россией].

The sad truth seems to be that the stalwarts of the “Russia threat syndrome” have pushed the thin “Russia-gate” narrative with such determination that an Administration formerly inclined toward the common sense solution of finding a modus vivendi with the Kremlin, has apparently overcompensated to assuage its multitude of critics and lurched naively into a frontal challenge to Russia’s obvious “core interests.” Such reckless actions (when considered in the aggregate with NATO expansion) may well have already poisoned the well of European security for the next 100 years.

But let’s try not to be so depressing. Ukraine is after all far away, right? If this author can find any shred of hope at the end of this sad tale, it is only that the World Cup is about to go off in Russia, so Moscow has every reason to “play nice” in difficult circumstances, at least for a few months. Speaking of sports and the international situation, perhaps the Washington Capitals might finally deliver Lord Stanley’s Cup to the shores of the Potomac for the first time? With a roster packed full of Russian talent, a Capitals victory on the ice could perhaps provide some much needed cheer for the gravely troubled U.S.-Russia bilateral relationship.

Lyle J. Goldstein is Research Professor in the China Maritime Studies Institute (CMSI) at the United States Naval War College in Newport, RI. In addition to Chinese, he also speaks Russian and he is also an affiliate of the new Russia Maritime Studies Institute (RMSI) at Naval War College. You can reach him at [email protected]. The opinions in his columns are entirely his own and do not reflect the official assessments of the U.S. Navy or any other agency of the U.S. government.
Image: Members of the "Donbass" self-defence battalion swear the oath to be officially included into the reserve battalion of the National Guard of Ukraine, near Kiev, June 23, 2014. REUTERS/Valentyn Ogirenko