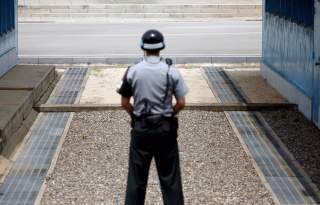 Delegations from North and South Korea met for the first time in two years at the Truce Village in Panmunjom. Reports indicate that agreement was reached for the DPRK (Democratic People’s Republic of Korea) to send a delegation composed of athletes, a martial arts demonstration team, high-level officials, supporters and journalists to the Olympics in Pyeongchang. This was considered a benevolent North Korean gesture. Both sides agreed to hold military talks to reduce tensions at some indefinite date. Family reunions were discussed, but discussion of nuclear weapons was angrily rejected. China’s Xinhua News Agency, citing official North Korean press statements, said that “an early national reunification is the goal of peace offer made by Pyongyang to Seoul, as officials of both countries started their first high-level meeting Tuesday.” Given that no surrender offer was made, one must assume that North Korea envisions reunification on its own terms.

Even this discussion required an accommodation by South Korea and the United States, only to be rebuffed when the nuclear issue was raised. Rescheduling the U.S-ROK exercise to a time after the Winter Olympics was not, by itself, that significant. But the perception that this was done as an unrequited concession to gain North Korea’s attendance at these talks in the DMZ is significant. North Korea’s angry rejection of any nuclear discussion reinforced the perception of concession. The report that both Koreas did agree to future talks on tension reduction establishes another “new normal.” North Korea is changing the operations of our alliance with South Korea. These are precedents we will see again.

“What Kim wants” finally becomes clear. It’s not limited to regime survival: he’s a particularly brutal autocrat—and this type of ruler must keep moving forward and conquering new demons. Compromise or settling for some status quo is not possible—it would be his head. He seeks Korean unification on his terms. It would fulfill the Kim family destiny. Now he is backed by the potential of North Korean weapons of mass destruction (WMD). The Kim regime demonstrated both will and skill in their use of WMDs with the careful deployment of a VX nerve agent in the airport of Kuala Lumpur in February 2017. Add nuclear and missile capability and it’s obvious that profound changes in regional politics are the result. North Korea’s ability to coerce others, especially South Korea and Japan, increases exponentially.

China, perceiving its own set of lousy options regarding North Korea, will pressure them only so far. Even the UN gave countries hosting North Korean laborers two years to expel them—hardly a part of “severe sanctions.” This two-year grace period is a great excuse for China to move even more slowly. More important perhaps is that China’s national narrative includes saving North Korea from the American invasion in 1950. Mao’s son is buried there in a martyr’s cemetery. China’s national interests require a viable North Korea, not a democratic country, on its border. Their frustration with the Kim family does not extend to seeing the North Korean regime fail. On the other hand, China is likely not discomfited by the thought of an end to U.S. military presence in a future Korea. China is again enticing major South Korean corporations to do business in China. Making China-South Korea economic ties increasingly important will affect relations.

Among our allies, South Korea and Japan have their own bone-deep historical and territorial issues. Days after Japan mulls the F-35B aircraft for its ships, Korea does the same. Sensitive nationalism in both countries creates many vulnerabilities which can be exploited by those seeking to diminish U.S. alliances.

The United States is growing a “trust deficit” with our allies. There are many causes—including campaign rhetoric that questioned their value, our sudden withdrawal from our own extensively negotiated Trans-Pacific Partnership and withdrawal from other international agreements—that our allies wished us to maintain. What is a defense alliance if not an international agreement? Those who wish to sow discord charge that America’s word cannot be trusted from one administration to another. Now, North Korea’s most recent capability demonstrations cause us to respond directly to North Korea and its leadership with almost nothing said or done about the welfare of our allies most directly affected: South Korea and Japan.

Any nation that allied with another must deal with the conflicting fears of abandonment on one hand and entrapment on the other. Certainly, Korea and Japan do not wish the United States to abandon them to face the greater military powers and economies of Asia alone. Yet neither do they wish to be trapped by a major conflict where they would absorb most of the damage. The more we make this about the United States versus North Korea, and only that, the more we devalue our allies and our alliances and the more we raise both fears—abandonment and entrapment.

Urgent work is needed to reverse these adverse trends. Alliances must be about far more than military matters, or they are doomed to fail. In an alliance, the military component is the hard shell within which both national and alliance life grows. Tremendous economic growth in Korea and Japan following World War II, and the democratization in Korea, while alliance military forces maintained the hard shell, shows this well. The shell is necessary, but not sufficient: the growth within the shell is the purpose. We must show in meaningful and demonstrative ways that our economic, business, political, cultural, educational, trade, aid and other ties are strong, getting stronger, and highly valued.

In today’s shell, the security and military realm, we must make this as much or more about defense of allies and friends as it is about our homeland security. We must double down on deterrence and vastly enhance both our capabilities and capacities in air and missile defense, undersea warfare, cyber defense and offense, and the protection of space-based capabilities.

Most important, the United States must become, again, the visible vocal, and ever-present champion of the values of human rights, free society and self-government. Of course, we’re not perfect, but we are still the ideal for those living under authoritarian rulers. When we speak louder about these things it really bothers dictators. Spreading the word about freedom and democracy—and backing it up—is more powerful in this contest than any new missile.