Don't Be Fooled: The Iran Protests Won't Overthrow the Regime 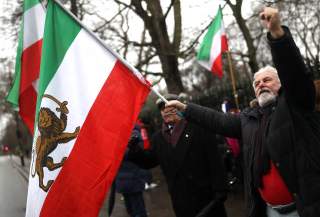 The protests that rocked an unprecedented expanse of Iran were unlikely to threaten the regime’s survival despite the hopes and dreams of many here in Washington. Here’s why:

- The security apparatus was prepared for such a protest movement. The regime has implemented structural changes to the Islamic Revolutionary Guards Corps (IRGC) and the paramilitary Basij organization. It has also improved the capabilities of the police forces over the last decade for the express purpose of tackling a sudden nationwide protest movement—even one more violent than the current situation. The regime also appears to have been fairly successful in preventing the security forces responding to the protests from inadvertently escalating the situation.

- Regime leadership is unlikely to lose its will to oppress the people. There is no indication that the current leadership was likely to lose its will or nerve, or that it would easily fall apart in ways that matter. Regime behavior in recent times of crisis indicates that Supreme Leader Ali Khamenei will unite Iran’s otherwise fractious political elites and groups in the face of a genuinely existential threat. Many regime officials began working in tandem immediately to de-escalate the situation by separating (what they hope are) the “reconcilables” dissatisfied with Iran’s economic situation from the “irreconcilables” interested in overthrowing Khamenei. It is noteworthy, however, that the regime has not, in fact, unified in the face of these protests. Factions are already blaming each other and attempting to score political points. This is likely an indication of their confidence that the survival of the regime is not at stake. Though if they are wrong, if the protests re-emerge or take a sudden dangerous turn, the regime might find itself unready to face a more serious challenge. In the past however, the regime has suddenly come together and survived.

The protests have reportedly waned. But it’s not over. Any spark could reignite the people’s anger. The regime cannot possibly address the actual grievances of the protesters quickly—or, indeed, at all. Iran’s economy is badly distorted by the intrusion of the regime (by the IRGC itself; the Supreme Leader, who owns a vast conglomerate worth tens of billions of dollars; and by the “bonyads,” ostensibly charities but actually mechanisms used by the regime for economic dominance). Iranian politicians regularly hurl accusations of corruption against one another—and they are all true. In addition, Iran lacks the petrochemical wealth of Saudi Arabia or the financial strength of the United Arab Emirates, but has to support a population three times the size of Saudi Arabia’s. So it is likely that the economic grievances that motivated these protests will continue for a long time.

The protests also reflected a high degree of popular disenchantment with politicians across Iran’s political spectrum, including the “reformists” and their leader, President Hassan Rouhani. That disenchantment is likely to remain a long-term feature of the Iranian political landscape. It indicates that Rouhani is less of a popular hero or embodiment of the hopes of the Iranian people as many Western officials and commentators have thought. When courting voters in the 2017 Iranian presidential election, Rouhani promised the Iranians much more—especially economically—than he could have ever delivered. The jockeying between reformists and hardliners will only intensify, and who will prevail is far from clear.

Iran has had a new watershed moment. Whatever happens, going forward, things will be different in Iran. How? We shall have to wait and see.

This article has been updated since publication.