Don't Bend the Law to Fight Terror in Nigeria 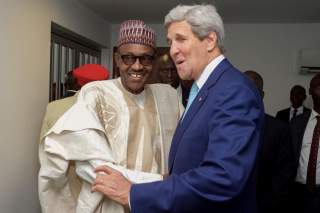 Earlier this month, the Obama administration revealed that it is poised to sell up to twelve light attack aircraft to Nigeria in a bid to support the country’s fight against Boko Haram.

This might sound laudable at first glance, but in reality, selling arms to Nigeria would mean the United States essentially breaking the so-called Leahy Law. Passed in 1997 by amending the Foreign Operations Appropriations Act, it prohibits the United States from exporting arms to “any unit of the security forces of a foreign country if the Secretary of State has credible information that such unit has committed a gross violation of human rights.”

The Leahy Law’s three-stage vetting process is stringent. It begins with the appropriate U.S. embassy carrying background checks on the individuals or units applying for assistance, by analyzing the Department of State (DoS) International Vetting and Security Tracking (INVEST) system, DoS Country Reports, cooperating with local police forces or even interviewing individual victims where necessary. If any credible information is found, the embassy can bar further support or refer to Washington.

In Washington, the Bureau of Democracy, Human Rights, and Labor (DRL) receives the results of the ambassadorial vetting and conducts investigations of its own. Again, if credible information that the violation or issue is serious enough to prohibit U.S. involvement is found, support is refused and the findings recorded in INVEST. Lastly, if further review of the information is required, then DRL will assemble a broader team of State Department representatives, who may request further information from the embassy in the country in question before a decision is made. With such a meticulous evaluation process, it is puzzling that there is any expectation that the Nigerian military will possibly pass the test.

Indeed, the Nigerian military is currently being investigated by the International Criminal Court (ICC) on charges of illegal killings and unlawful incarcerations. In June of last year, an Amnesty International report claimed that, in the course of Nigeria’s war against Boko Haram, brutal conditions while in government detention have led to the death of at least seven thousand people, while an additional 1,200 have been “extrajudicially executed” by Nigerian security forces. A further twenty thousand have been “arbitrarily arrested.”

And the man elected to clean up the country, President Muhammadu Buhari, seems to be either thoroughly naive or thoroughly complacent. In June of last year, he called for a lifting of the Leahy Laws, arguing that the “unproven allegations” of Nigerian security forces’ human-rights violations had rendered his forces impotent against the might of Boko Haram. His statement ignored two very crucial facts. The first that, as the later proven human-rights abuses showed, the Nigerian military was certainly not sitting on its hands waiting for U.S. support in the fight against Boko Haram and second, the application of the Leahy Laws, never results in a “blanket ban” on whole countries, it is individuals or units who are assessed before assistance is either granted or refused.

Buhari’s questionable relationship with reality came to the forefront once more in December 2015, when he declared that Boko Haram had been “technically defeated”—a curious statement given the fact that the group’s body count rose by 62 percent in 2015, and in the first quarter of 2016 more than thirty-six attacks that left 422 dead were staged. And worryingly, Muslim herdsmen of the Fulani tribe also seem responsive to the clarion call of Islamic extremism, launching systematic attacks on the people of the largely Christian Benue state in north central Nigeria.

Terrorism and human-rights abuses aside, the country is, in UK Prime Minister David Cameron’s words, “fantastically corrupt.” And despite Buhari’s spokesman Garba Shehu retorting that Cameron “must be looking at an old snapshot of Nigeria,” the evidence suggests otherwise. In a survey of 168 countries carried out by Transparency International in its annual “Corruption Perception Index,” Nigeria ranks thirty-second from bottom. Sambo Dasuki, a former national security advisor in charge of weapons procurement was arrested in 2015 and accused of “stealing more than $2 billion from the military” by awarding phantom contracts to buy twelve helicopters, four fighter jets, bombs and ammunition—they were never delivered.

In a country like Nigeria, adding weapons contracts would only fan the flames of corruption and provide, quite literally, further ammunition to an army that is already making a name for itself for its flagrant disregard of human rights. The Leahy Law is there for a very good reason. The process of vetting individuals and countries is rigorous, and individuals and entities are considered on a case-by-case basis.

If Nigeria’s military keeps failing the assessment, the solution is for it to address the serious issues that permeate the nation, not for the United States to bend the rules.

Edward McKinney is a private security adviser with hands-on experience in multiple conflict areas around the world.