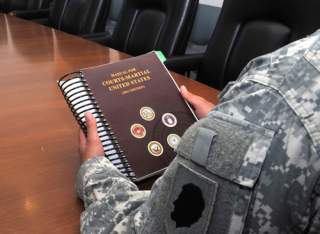 There are no perfect justice systems, and the one built around the court-martial is no exception. But the usual arguments for military justice reform are built on failed comparisons, weak analysis, willful historical blindness and factual imprecision. We can have better military justice—but first we need a better discussion about how to get there. The first problem to address is that our military justice reform debate is an ongoing argument about law and politics that conceals a powerful web of unexamined cultural presumptions. We are having another kind of culture war, but without ever explicitly saying so. To act on the unstated premises driving our current discussion would be to seek out the heart of warrior culture and eradicate it, and to do so in the service of make-believe.

In Congress, Sen. Kirsten Gillibrand continues an effort to strip military commanders of their authority to convene courts-martial in sexual-assault cases. Authority over those cases would instead be passed to independent prosecutors in the armed forces, who would supposedly deliberate over accusations in the more balanced manner of local district attorneys, wholly outside the influence of military considerations. In a prepared statement, Gillibrand revealed her underlying premise without quite making it explicit. Justice managed by military commanders isn’t working, she said, so "it’s time to instead put decision making power into the hands of non-biased, professionally trained, military prosecutors.”

In comparable language built around a different area of focus, the Yale Law School professor John Fabian Witt recently wrote that “law has been trying to civilize war for a long, long time.”

In the Manichean understanding of the world shared by Gillibrand and Witt, military systems are irrational and reckless, while legal systems are unbiased and judicious. An infantry commander is only trained to break things, and lives in the world of reckless passions; a lawyer is relentlessly disinterested, calmly weighing evidence and the law on a scale calibrated by the precision of legal thought. Lawyers are “non-biased” because they are “professionally trained” in the rational system of the law. Military commanders didn’t go to law school, so they’re trapped in the realm of the uncivilized.

It’s a lawyer’s brief for the argument that lawyers should have authority over an ever-larger portion of our institutions, being trained to operate with perfectly balanced minds. Outside Congress and the legal academy, the premise reads like a joke: We have to make the world more rational and fair—so we should have lawyers run it.

It’s a bad time to be making this case. In Baltimore, a set of charges rushed to court after Freddie Gray’s death in police custody have begun to evaporate, leading many observers to the conclusion that State’s Attorney Marilyn Mosby brought the charges in the interests of politics rather than the interests of justice; five of six city police officers indicted by Mosby’s office have brought a malicious prosecution lawsuit. Meanwhile, in a recent decision in Texas, U.S. District Judge Andrew Hanen released a remarkable opinion in which he concluded that lawyers from the Department of Justice had systematically lied to the federal courts in a civil case involving immigration regulations. It is, the judge wrote, “hard to imagine a more serious, more calculated plan of unethical conduct.”

But of course, these are only the latest scandals in the civilian justice system. In the 1980s, the infamous McMartin Preschool case was one of more than a dozen bizarre prosecutions that would later be compared to the Salem witchcraft trials. Twenty years after that wave of sexual hysteria, Durham County, North Carolina’s District Attorney Mike Nifong was disbarred for his grossly unethical handling of false sexual-assault allegations against members of the Duke University lacrosse team.

More recently, in Orange County, California, a county judge disqualified every one of the 250 prosecutors in the local district attorney’s office from further participation in a murder trial, a response to an ethics scandal involving the improper use of jailhouse informants.

We should debate military justice reform. Courts-martial can be improved, as they were in an important series of earlier reforms that constrained command authority and delivered substantial legal protections to defendants. But an honest discussion wouldn’t compare the imperfect military justice system to an invented idea of an unblemished lawyer’s justice. Reformers want to make lawyers more powerful in the armed forces, pushing legal culture into the space they wish to take from martial culture. They should say so, and debate the implications. It simply isn’t the case that military commanders are inevitably unjust, or that a more lawyer-driven system will inevitably be more rational and fair. We have too many examples to ignore the flaws in that argument.

The push to expand the role of legal professionals in the military, and therefore to diminish the role of military commanders, fits into a much larger context. In the last twenty-five years, the number of academic administrators on college campuses has more than doubled, “vastly outpacing the growth in the number of students or faculty.” In health care, doctors are a shrinking piece of a system similarly weighed down by an ever-larger group of administrators. Now, right on schedule, we face the argument that the armed forces need more—and more powerful—lawyers. A growing focus on the culture of regulation increasingly excludes the core functions of institutions. The culture of the hall monitor is supplanting the culture of makers and doers.

In the armed forces, the insistence on lawyer-focused justice carefully overlooks a full century of debate and reform that has appropriately embedded command authority in a structure of law and process. It’s as if the Ansell-Crowder dispute never happened, and the UCMJ is the same archaic military code we’ve always had. The contemporary American military has strong due process rules, protection against unlawful command influence, independent judges, highly professional lawyers and a system of appellate courts—a set of twentieth-century developments that have radically changed the court-martial. Those developments exist in concert with the principles of command, while critics of the military justice system speak and write as though law and command are inherently inimical. Advocating change, military-justice reformers elide the reality of the changes that have already happened, and discuss the court-martial as if it were still a nineteenth-century instrument.

We can have a more honest debate. Start with the serious problem of sexual assault in the armed forces, the center of the current discussion about military justice reform. Critics charge that the military does poorly at policing sex crimes in the ranks, and argue that the investigation and prosecution of sex crimes in the military should be handled through the structure of civilian justice systems: police investigate, and then lawyers alone decide whether or not to file charges.

But the people who present this case never finish their implied comparison. If military justice does poorly with sexual assault, and therefore should become more like civilian justice, then the necessary implication is that civilian justice systems do well at handling sexual-assault allegations. They don’t. By the most generous definition, local police and sheriff’s departments “clear” about 40 percent of sexual-assault allegations. But that number reflects a large percentage of cases that are “cleared by exception,” regarded by police as having been solved even though they made no arrest.

This is not the story military-justice reformers are telling—because it represents a reality would be fatal to their foundational premises. We shouldn’t let them get away with the elision. The health of our military culture is a national security issue.

Chris Bray is a former infantry soldier with a history PhD from UCLA (where his dissertation was on military justice). He is also the author of a new book on the history of American military justice, which was released in May by W. W. Norton.